Hello and Welcome to CricketCountry’s live coverage of Day 4 of the match between Assam and Bengal at Barsapara Cricket Stadium, Guwahati. At stumps of Day 3, Assam were 72 for 2 with opening batsman Pallav Kumar Das and Gokul Sharma on crease at 28 and 8 respectively. After posting a decent first innings total of 444, Bengal bowled out Assam for a poor total of 143 and hence enforced follow-on and Assam was put to bat once again. The hosts once again were off to a poor start as they had lost Rahul Hazarika in the 10th over when Assam only had 28 runs on board. Complete coverage of Ranji Trophy 2015-16

Live Cricket Score: Assam 143/8 | Overs 84 | Match drawn | Assam, Bengal qualify for quarter-final | BATSMEN: Wasiqur Rahman 13, Arup Das 0: That is it, they have decided that the light is not enough, and off they go. This means that Assam and Bengal are both through, while Delhi have been eliminated. Full credits to Assam for batting out 84 overs, though they had been helped by weather. The third team (and group topper) are Vidarbha, while Karnataka, having lost their first Ranji Trophy match in 1,102 days, have been knocked out. Final points table (Group A): Qualified: Vidarbha 29 Bengal 28 Assam 26 Eliminated: Delhi 25 Karnataka 24 Rajasthan 17 Maharashtra 17 Odisha 12 Haryana 6

Vidarbha have beaten Haryana by innings and 31 runs and move to quarter-final. CLICK HERE FOR THE BLOG. Karnataka have lost to Maharashtra by 53 runs and have been knocked out of the tournament. CLICK HERE FOR THE BLOG. This means that Assam stands with a serious chance for the third spot (if Assam lose Delhi stands with a chance as well); Bengal are already through irrespective of the result of the ongoing match.

Live Cricket Score: Assam 143/8 | Overs 84 | Need 158 to save innings defeat | BATSMEN: Wasiqur Rahman 13, Arup Das 0: Gani strikes! Amit Sinha batted 60 balls for his 3 before yielding in the last hour. They now have two wickets in hand. If they save this, they are through. If they do not, Delhi sneak past them. OUT! Amit Sinha c Sudip Chatterjee b Aamir Gani 3! Update: they are checking for light…

Live Cricket Score: Assam 143/7 | Overs 82 | Need 158 to save innings defeat | BATSMEN: Amit Sinha 3, Wasiqur Rahman 13: So, now, all Assam need is to bat out the final hour. They have Sinha and Rahman battling it out, but can they hold it out against Ojha and Gani? Remember, Assam need this 1 point to go through. Delhi fans are also waiting eagerly for the result of the match…

Live Cricket Score: Assam 130/7 | Overs 73.3 | Need 171 to save innings defeat | BATSMEN: Amit Sinha 2, Wasiqur Rahman 1: Now, now, Assam lose another wicket, and this time it is Dinda, and Syed Mohammed is caught-behind after a 31-ball 1! If they cannot bat out this session they will, in all probability, be eliminated. Remember, Bengal have already as good as qualified. OUT! Syed Mohammed c Shreevats Goswami b Ashok Dinda 1! Follow Karnataka vs Maharashtra here

TEA| Live Cricket Score: Assam 126/5 | Overs 62.2 | Need 175 to save innings defeat | BATSMEN: Pallav Kumar Das 55: Setback for Assam as Tarjinder Singh follows at the brink of tea. They now need to bat out a full session. However, Pallav Das is still hanging on. OUT! Tarjinder Singh c Pankaj Kumar Shaw b Aamir Gani 6! Elsewhere, at Pune. Karnataka need another 87 with 2 wickets in hand. Follow the live blog here.

Live Cricket Score: Assam 114/4 | Overs 56 | Need 187 to save innings defeat | BATSMEN: Pallav Kumar Das 49, Tarjinder Singh 1: Assam lose their biggest wicket to Aamir Gani as Arun Karthick falls. They still need to bat over a session to get that crucial 1 point that may help them provided Karnataka lose. Pallav Das holds the key here. OUT! Arun Karthick b Aamir Gani 17!

Live Cricket Score: Assam 92/3 | Overs 48 | BATSMEN: Pallav Kumar Das 42(143), Arun Karthick 3(7): From here, Assam trail Bengal by 209 runs with seven wicket to spare. Both the sides are fighting for the quarter-final spot and the side which gets 3 points at least today is ensured of it. The last batsmen to get out was Gokul Sharma. He was Mukesh Sharma’s first wicket for the day. OUT! Gokul Sharma b Mukesh Kumar 10(55)

Live Cricket Score: Assam 72/2 | Overs 36 | BATSMEN: Pallav Kumar Das 28(102), Gokul Sharma 8(30) | Gokul Sharma and Pallav Kumar Das have a massive task ahead of them. If Assam are to survive the day their batsmen will need to put in a standout performance. Aamir Gani has taken both wickets to fall so far.

Winning the toss, Assam put Bengal to bat first. Following an early fall of a wicket, Sayan Shekhar Mandal took charge of their innings, scored 85 before falling to Assam’s Amit Verma’s bowling. Shreevats Goswami later on ensured Bengal cross 400 as he scored 112 in 253 deliveries. Later on Pankaj Singh missed a century by just one run when Syed Mohammed trapped him leg before wicket in the 147th over. In reply, Assam had the most horrid start to their innings, losing 4 wickets in 3 overs with just one run on board. All the 4 dismissals were made by Ashok Dinda. The other wickets were shared between Mukesh Kumar and Pragyan Ohja, both claiming 3 wickets each.

It was Tarjinder Singh’s fighting half-century that led to Assam’s recovery following the night-mare start of the innings. Howevr, after his dismissal, the wickets fell like pins and eventually Assam was bundled out for 143. Bengal then enforced follow-on that put Assam to bat again. 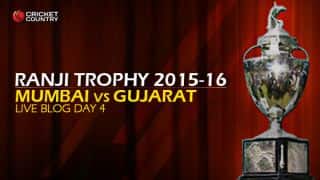