Catch Live updates of the Ranji Trophy 2015-16 match between Assam and Delhi on Day One.

Hello and welcome to cricket country’s live coverage of the Ranji Trophy 2015-16 Group A match between Assam and Delhi. We will bring you live updates of the match from Guwahati on Day One. Assam have been in outstanding form this season but the same can be said about Delhi in a bit more convincing fashion. The teams occupy two of the top three positions in the Group A table as it stands now and it makes this that much more an interesting match up. Delhi have won three of their six games while the remaining games have ended in draws. On the other hand Assam have won two games and drawn two while they have been beaten once. They have played just five matches so far and will want to take the sixth game as a direct opportunity to seal their position in the top three. It remains unlikely that they will beat a dominant Delhi side but they can try hard and with the way they have been playing they can surely manage to get at least a first innings lead draw as they did against reigning champs Karnataka earlier in the tournament.

Live cricket score: Assam 69/3 | Overs 29 | BATSMEN: Gokul Sharma 22(63), KB Arun Karthick 19(53) : Assam trail by 80 runs at the end of Day 1 after reaching a score of 69 for the loss of three wickets after 29 overs. Gokul and Karthick have added 33 runs for the third wicket so far in the innings, and their partnership must flourish if the Assam aim to take a substantial lead against Delhi on the second day.

Live cricket score: Delhi 149 | Overs 59.4 | BATSMEN: Manan Sharma 46(100): Assam finally put Delhi out of their misery by bowling them out for 149, with Syed Mohammad and Amit Verma taking the final wickets of the innings. Manan Sharma remains unbeaten on 46, failing to get to his half-century as Navdeep Saini is the last batsman to depart, getting caught by Hazarika off the bowling of Verma after hitting a boundary off the first ball. OUT! Pulkit Narang c KB Arun Karthick b Syed Mohammed 8(59), Navdeep Amarjeet Saini c Rahul Hazarika b Amit Verma 4(2)

TOSS: Assam won the toss and decided to field first. 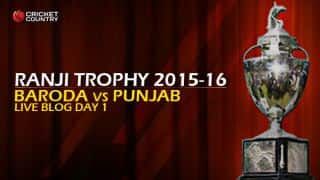