Delhi resume from their overnight score of 101/4, with Milind Kumar and Puneet Bisht yet to get off the mark.

Hello and welcome to CricketCountry’s live blog of the third day of the ongoing Ranji Trophy 2015-16 Group A match between Assam and Delhi at the Barsapara Cricket Stadium in Guwahati on Tuesday. Delhi finished on a score of 101 for the loss of four wickets at the end of the third day’s play, with Milind Kumar and Puneet Bisht yet to get off the mark. Skipper Gautam Gambhir was the first casualty of the day, getting dismissed for  a two-ball duck, before Unmukt Chand (44) and Dhruv Shorey (38) rescuing the side with a 70-run second wicket partnership. Gokul Das and Krishna Sharma have taken two wickets each for six and 31 runs respectively, with Delhi sitting on a 93-run lead, with six wickets in hand and a day to go. Complete coverage of Ranji Trophy 2015-16

Assam were bowled out for a lowly 157, although they managed to gain an eight-run first innings lead over the visitors. Arun Karthik was the only batsman to offer any resistance with the bat whatsoever, scoring a fighting 81 off 169 balls, which included eight fours and three sixes. Skipper Gokul was the next highest-scorer for the side, scoring 24 off 77 balls and sharing a 43-run partnership with Karthik. Arup Das retired hurt after facing just 14 deliveries for the innings to come to an end.

Delhi were earlier dismissed for a mere 149, with Krishan (4 for 38) and Arup Das (3 for 49) sharing seven wickets between them to lead the destruction. The Delhi top-order crumbled under a disciplined spell of bowling by the Das’, getting reduced to 8 fo 4 at one stage.

Live Cricket Score: Assam 157 & 70/3 | Overs 32 |  Delhi 168 & 172 | BATSMEN: R Hazarika 30 (94), KB Arun Karthick 13 (17) | Bad light has forced the game to be called off early. Day 3 has ended in Guwahati with Assam 70 for 3. They still require 95 runs to win on the final day. For Delhi, the equation is 7 wickets to win. Both the teams stand equal chance in the match. Though Assam were bowled out for 157 in the first innings, the application they have shown so far shows they can chase it down. On the other hand, Delhi too are pretty much into the game. Day 4 will be exciting as it will give us a winner at the end of this fascinating match.

Live Cricket Score: Assam 157 & 66/3 | Overs 29 |  Delhi 168 & 172 | BATSMEN: R Hazarika 28 (87), KB Arun Karthick 12 (9) | Assam have made a decent recovery here. After the early loss, Hazarika and Verma added 42 crucial runs for the third wicket and took team score past 50. A little break in concentration and Verma lost his wicket. Manan Sharma got his team the vital breakthrough when he got Verma caught by skipper Gambhir. Hazarika has been going steady at the other end and has Arun Karthick, who is looking aggressive from the outset, for company now.

Live Cricket Score: Assam 157 & 25/2 | Overs 16 |  Delhi 168 & 172 | BATSMEN: R Hazarika 11 (41), A Verma 7 (36) | Assam batters are battling it out in the middle at the moment. They have not lost any more wicket after the early strikes by Delhi. Opener Rahul Hazarika and middle-order bat Amit Verma have not given Delhi any other chance so far. The match is getting more intense with every delivery being bowled. Delhi skipper Gautam Gambhir will surely have some strategies up his sleeve and would want his team to go for the kill.

Live Cricket Score: Assam 157 & 13/2 | Overs 6 |  Delhi 168 & 172 | BATSMEN: R Hazarika 6 (13), A Verma 1 (3) | Things have started happening here for Delhi right from the beginning. Assam have lost two early wickets in pursuit of 165. First to go was opener Pallava Kumar Das, who was caught by Manan Sharma off Amarjeet Saini’s bowling. One-down Sarupam Purkayastha lasted just two balls before Pradeep Sangwan cleaned him up for a duck. Delhi are in the driver’s seat now.

Live Cricket Score: Assam 157 & 5/0 | Overs 2 |  Delhi 168 & 172 | BATSMEN: PK Das 5 (11) R Hazarika 0 (1) | Delhi’s second innings was wrapped up by Assam bowlers immediately after lunch. It ended on 172 with an overall lead of 164 runs. Thus, Assam have been set a victory target of 165 runs on a pitch that has all the demons within. The low-scoring affair is into its last innings now. Assam did not touch 160 run mark in the first innings and on a crumbling wicket, chasing 165 in the last innings is going to be extremely dicey.

Live Cricket Score: Delhi 168 for 7 & 149 | Assam 157 | Overs 81 | BATSMEN: Pulkit Narang 24 (126), P Awana 0 (1) | Just at the stroke of lunch, Delhi have lost their eighth wicket. They are now ahead by 160 runs in this match which is set for a tight finish. Pulkit Narang and tailender Parwinder Awana will continue with the proceedings post-lunch. For Odisha, Krishna Das, Amitt Verma, Gokul Sharma and Syed Mohammed have taken two wickets each.

Live Cricket Score: Delhi 141 for 6 & 149 | Assam 157 | Overs 67 | BATSMEN: Pulkit Narang 15 (82), Manan Sharma 1 (2) | Delhi started the Day 3 on their overnight score of 4 for 101 and with a lead of 93 runs. But this low-scoring match took exciting turn when Delhi lost a couple of quick wickets. First to go was Milind, whose hardwork was undone by Amit Verma. On the very next delivery, Verma removed Punit Bisht for a duck and left Delhi into tatters. At the moment, Delhi are ahead by 133 runs and have four wickets in hand. 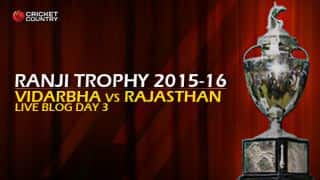 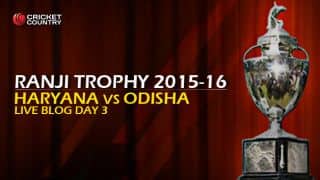