Catch the live updates of the fifth day's play between Australia and New Zealand here.

Good Morning folks! Hello and welcome to CricketCountry’s live coverage of Day 5 of the first of the three-match Test series between Australia and New Zealand at The Gabba in Brisbane, this is Rishad D’Souza along with Vishal Mehra and we will be bringing you all the live updates from this game. The visitors New Zealand are battling for a draw and their endeavour for a unlikely draw received a boost due to rain suspending play early on the Fourth Day. New Zealand have seven wickets in hand with Brendon McCullum and Ross Taylor at the crease, they will have to dig in for the long haul. LIVE SCORECARD: Australia vs New Zealand 2015, 1st Test at Brisbane

Live Cricket Score New Zealand 295 in 88.3 overs | BATTING: Mark Craig 26(28): And that’s it, the expected has happened. It’s an emphatic win for Australia by a margin of 208 runs! Has this set the tone for the remainder of the series? Tim Southee got an edge off Hazlewood, and after an entertaining partnership of over 40 runs between the final pair of Boult and Craig, Boult got a nick of Starc to keeper. It’s a strong and well deserved win for the home team at the fortress. OUT! Tim Southee 5(8) c Nevill b Hazlewood, OUT! Trent Boult 15 (26) c Nevill b Starc

Live Cricket Score New Zealand 244/8 in 79 overs | BATTING: Mark Craig 0(4), Tim Southee 1(1): It’s falling apart for the New Zealanders pretty quickly now! BJ Watling fell to Nathan Lyon for leg before and Brendon McCullum fell to a poor umpiring decision as the umpire deemed him out edged to slip but the two sounds were actually the front pad and the back pad but McCullum had no reviews left. Doug Bracewell got out the very next ball. OUT! BJ Watling 14(31) lbw Nathan Lyon, OUT! Brendon McCullum 80(80), OUT! Doug Bracewell 0(1)

Live Cricket Score New Zealand 230/5 in 72 overs | BATTING: Brendon McCullum 73 (66), BJ Watling 9 (8): New Zealand are doing well under the shadow of McCullum. He started edgily but has flourished as the innings has progressed. Jimmy Neesham and Ross Taylor however have departed and it’s now down to McCullum and Watling — the men who staged the grand rescue for New Zealand against India — could there be a repeat. OUT Ross Taylor 26(47) c Neville b Johnson, OUT! Jimmy Neesham 3(33) c Burns b Johnson

The forecast at the Gabba suggests there will be rains even on Day Five and the key for Australia to win the game will be to pick as many wickets as they can in the periods of play they get. A win will almost confirm their chances for a series win given the next Test at WACA, Perth where bowlers thrive on bounce but New Zealand bowlers lack the pace to make most of those type of wickets as became evident at the similarly natured Gabba. For New Zealand the key will be that McCullum and Taylor bat long as they are the most reliable in the line up after Kane Williamson who got out for 55 on Day Four to a potent Nathan Lyon who also got rid of opener Martin Guptill. 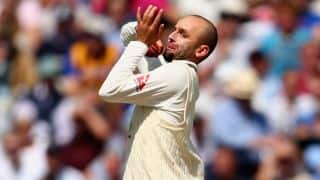 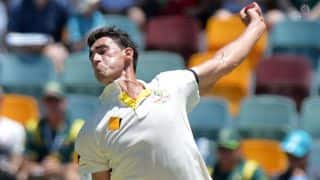