Australia will aim to put up an improved performance against South Africa in the fifth match.

Australia will aim to put up an improved performance against South Africa in the fifth match of the ongoing Zimbabwe Triangular Series 2014 at Harare on Tuesday.

According to AFP, Australia must overcome the embarrassment of losing to Zimbabwe and the departure of captain Michael Clarke to injury when they take on South Africa in the fifth match of the ongoing One-Day International (ODI) Triangular series on Tuesday.

Clarke’s hamstring problem flared up during his innings of 68 against Zimbabwe on Sunday, and insult was added to injury when the hosts chased down a target of 210 to pull off one of the great upsets in cricket’s history.

Clarke flew out of Zimbabwe on Monday to return home for treatment, leaving Australia with a squad of just 13 to pick from for Tuesday’s encounter. The three-wicket defeat to Zimbabwe saw Australia slip from No. 1 to No. 3 on the ICC’s one-day rankings table, below India and South Africa. It was just the second time ever that Australia had lost to the No. 10-ranked nation, following Zimbabwe’s win at Trent Bridge in the 1983 World Cup. 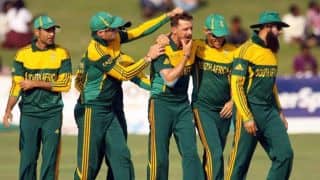