Hello and welcome to CricketCountry’s live cricket blog of the third day’s play between Australia and the West Indies at the Bellerive Oval in Hobart, on Saturday. I am Vishal Mehra along with Sakshi Gupta, and we will be bringing you the live updates from this game. West Indies  will resume their first innings being placed at back foot with score placed  of 206 for six, with Darren Bravo putting up an heroic unbeaten 94*, chasing mammoth 583 by Australia. Bravo found an able ally in Kemar Roach (31) as the duo went on to construct an unbroken 91-run partnership for the seventh wicket at stumps on Day 2.LIVE CRICKET SCORECARD: Australia vs West Indies 2015-16, 1st Test at Hobart, Day 3

LIVE CRICKET SCORE: WI 148 | 36.3 overs 2nd Inns f\o | BATTING: Jomel Warrican 6(2): All over at Hobart! Brathwaite’s fantastic innings comes to an end, such a pity he could not get to a hundred here. Hazlewood managed to produce great swing that defeated Brathwaite who tried to go for a defense but got his stumps ratled in return. Since Shannon Gabriel will not bat due to an injury, the game ends for West Indies inside three days. OUT! Kraigg Brathwaite b Josh Hazlewood 94(122)

LIVE CRICKET SCORE: WI 142/8 | 36 overs 2nd Inns f\o | BATTING: Kraigg Brathwaite 88(119), Jomel Warrican 6(2): Taylor who was dropped a couple of overs back throws away his wicket this time. He tried to replicate a shot that had earned him a boundary in the previous delivery but managed to find James Pattison at mid-off who takes a superb overhead catch. The hosts are 2 wickets away from a win here. OUT! Jerome Taylor c James Pattinson b Jos Hazlewood 12(8)

DROPPED! And it would’ve been a fair effort there from 12th man Coulter-Nile. Windies 7-111 #AUSvWI pic.twitter.com/RTPTQK7fna

LIVE CRICKET SCORE: West Indies 110/7 | 33 overs 2nd Inns f\o | BATTING: Kraigg Brathwaite 67(108), Jerome Taylor 7(3): Another wicket! Hzlewood ends Roach’s struggling innings. Wicket-maiden over from Hazlewood who bags his first wicket in this innings,. He went short on leg, while Roach tried to go for a pull but he managed it to gloove one to the wicketkeeper. West Indies’ misery continues, Australians are just three wickets away from a victory here. OUT! Kemar Roach c Peter Nevill b Jos Hazlewood 3(27)

LIVE CRICKET SCORE: WI 38/5 in 15 overs 2nd Inns f\o ; BATTING:  Kraigg Brathwaite 21(43), Jason Holder 4(11) : Play start early as West Indies look to somehow delay the inevitable.Kraigg Brathwaite and Jason Holder have it tough to survive an already charged up Australian bowling attack. James Pattinson will want to take up five wickets in his come-back match. Mitchell Marsh would also look to keep it simple and pick up as many wickets as possible.

WI 5/35 Welcome back to the cricket! Brathwaite and Holder to carry on #AUSvWI #WWOS pic.twitter.com/oCSw6hd4S8

LIVE CRICKET SCORE: WI 24/ in 7.6 overs 2nd Inns f\o ; BATTING:  Kraigg Brathwaite 14(6) Dinesh Ramdin 0(0): OUT!! Jermaine Blackwood  goes for a pair. The ball did not bounce one bit as the ball kept low and hit off stump. West Indies are in all sorts of trouble now. James Pattison is on a hat-trick as his team-mate Josh Hazlewood as in the first innings.

LIVE CRICKET SCORE: WI 24/3 in 7.5 over 2nd Inns f\o ; BATTING:  Kraigg Brathwaite 14(6) Jermaine Blackwood 0(0 ): OUT!! Pattinson is one fire. Not sure what Samuels could have done about that though. Fuller than a good length on off, the ball rises off that length and takes the bat handle. The ball lobs to Warner who completes an easy catch. Bending his back a lot more is Pattinson, which may have yielded some extra bounce. Nonetheless, Aus on fire. WI sink further.

LIVE CRICKET SCORE: WI 20/2 in 6 over 2nd Inns f\o ; BATTING:  Kraigg Brathwaite 14(6),Marlon Samuels 0(0): OUT!!! James Pattinson picks up the most important West Indian batsmen in Darren Bravo. Bravo who has scored his a century in the first innings was looking good in few balls he had faced. West Indies are still 338 behind with only 7 wickets in hand.

LIVE CRICKET SCORE: WI 2/0 in 1.3 over 2nd Inns ; BATTING:  Kraigg Brathwaite2(6), Darren Bravo 0(0): OUT!! James Pattinson picks up his first for the day as Rajendra Chandrika goes without disturbing the scoreboard. Steven Smith picks up a blinder in slips, the kind of start Australia would have dreamed of in the second innings as well. This is Chandrika’s third duck in four Test innings. Darren Bravo is back onto the field, he just stayed away for 16 balls. West Indies still trail Australia by 356 runs with 9 wickets remaining in the second innings.

LIVE CRICKET SCORE: WI 2/0 in 1 over 2nd Inns ; BATTING:  Kraigg Brathwaite2(6), Rajendra Chandrika 0(0): West Indies’s openers will want to have a better outing this time around with the bat. Peter Siddle to bowls line and length over to West Indies openers.West Indies are in their 2nd innings trail Australia by 358 runs with 10 wickets remaining in hand. Steven Smith decides to enforce follow-on as West Indies are still 360 runs behind Australia.

LIVE CRICKET SCORE: WI 223/9 in 69.9 ; BATTING: Jomell Worrican : OUT!!! Just the kind of start Australia wanted. They wrap things  in a jiffy picking up three wickets in just opening  five overs. West Indies’s openers will need a to dig in deep if they have to make a match out of this game. Josh Hazlewood was the pick of the bowlers snatching 4 for 45 , with Nathan Lyon taking 3 wickets for 43 runs. Darren Bravo made a magnificent hundred was the final man out for the West Indies. Shannon Gabriel did not come to bat as he is injured.

LIVE CRICKET SCORE: WI 215/7 in 66.5  ; BATTING:  Darren Bravo 100()— HUNDRED!!! and WICKET!!! in the first over of the day.Josh Hazlewood picks up Kemar Roach trying to block. Darren Bravo has looked to be in a league of his own. Bravo has been more composed and calm.All lot will depend on Bravo who will want to get West Indies close to Australian total. Steven Smith will look to pick up early wickets and close this innings as early as possible.

2 in 2 balls for Hazlewood! Has to wait until next over for a possible hat-trick. https://t.co/yEHtgmtEpX #AUSvWI pic.twitter.com/qvjmVUqbyF

After five fruitless sessions for the West Indies, only the most ardent Australia supporters would have imagined seeing one of their players thrive at Australia’s expense. For the rest, it was a relief to see Darren Bravo standing in the way of a quick end to the first Test in Hobart. Bravo finished the day just six runs short of a hundred. He did not have prevented Australian victory at Hobart with West Indies still trail by 376  but did make it a point to  Australia’s bowlers that they will have to work hard for his wicket. The final 25 overs of the day Bravo was well supported as tailender Kemar Roach, was able to hold up an end with more authority that the rest of the West Indies batsmen were able to, as they slumped to 116 for six.

Earlier, Australia, resuming at 438-3 continued to plunder runs against a West Indies attack  amassing another 145 runs before lunch for the loss of only one wicket. Adam Voges got to his first ever double ton(269*) and Shaun Marsh made a stroke full 182. 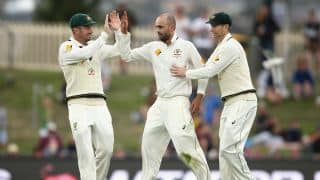 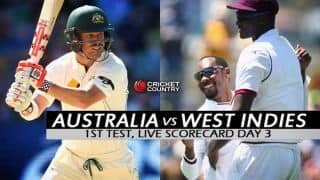