Welcome to CricketCountry's live coverage of the ICC World T20 2016 warm-up tie between Australia and West Indies at Kolkata.

Good Evening! Hello and Welcome to CricketCountry’s live coverage of the ICC World T20 2016 warm-up tie between Australia and former champions West Indies at the historic Eden Gardens Stadium in Kolkata on Sunday. I am Ayush Gupta, and I will be bringing to you the live updates from tonight’s action. Australia, who have been in a shaky form in this format of the game, lost the recent three-match Twenty20 International (T20I) series against India at home by 0-3 and would look to get their settings right in this only warm-up tie. While West Indies, who lost their previous warm-up tie to India, too would look to get their combinations right. LIVE CRICKET SCORECARD: Australia vs West Indies, ICC World T20 2016, warm-up match at Eden Gardens, Kolkata

LIVE CRICKET SCORE: WI 162/7 in 20 Overs. BATTING: Darren Sammy 50 (28), Ashley Nurse 12 (15) — WI WIN!!!! That’s it, as West Indies pull out a stunner, while Australia suffer a shock defeat in the warm-up game, as Watson’s 60 and Hazlewood’s hattrick goes in vain, while Darren Sammy’s 50 ensures they win this toe comfortbaly and move into the Super 10 round on a high.

LIVE CRICKET SCORE: WI 19/3 in 4 Overs. BATTING: Johnson Charles 10 (18), Denesh Ramdin 1 (1) — HATTRICK!!!! Just when it seemed West Indies were off to a staedy start, Josh Hazlewood comes up with a stunner, as he claims a hattrick, dismissing Holder, Samuels and Bravo in consecutive deliveries. However, it would be cpunted as an unofficial one, as the match is a warm-up tie, while Ramdin makes his way in. OUT! Jason Holder lbw Josh Hazlewood 6 (3), Marlon Samuels b Josh Hazlewood 0 (1), Dwayne Bravo b Josh Hazlewood 0 (1)

LIVE CRICKET SCORE: AUS 161/9 in 20 Overs. BATTING: Andrew Tye 0 (2) — GONE!!!! Steven Smith falls for 36 in the final over, as Dwayne Bravo traps him leg before, while Andrew Tye comes in, and Adam Zamba was dismissed off the final ball for a couple, after being bowled by Bravo, as Australia end their innings on 161 for the loss of nine wickets, as WI need 162 to chase it down in 20 overs. OUT! Steven Smith lbw b Dwayne Bravo 36 (27), Adam Zampa b Dwayne Bravo 2 (4)

LIVE CRICKET SCORE: AUS 118/5 in 14 Overs. BATTING: Steven Smith 13 (13), Peter Nevill 1 (2) — GONE!!!! It’s Glenn Maxwell as he departs right after coming for an unfortunate duck after being bowled by Benn, followed by Mitchell Marsh, who too is dismissed for a couple, after being caught by Darren Sammy, as Peter Nevill makes his way in. OUT! Glenn Maxwell b Sulieman Benn 0 (2), Mitchell Marsh c Darren Sammy b Sulieman Benn 2 (2)

LIVE CRICKET SCORE: AUS 85/1 in 10 Overs. BATTING: Shane Watson 43 (32), Steven Smith 5 (5) — Healthy start by the Aussies so far, as they have lost only one wicket in the form of Aaron Finch, who fell for a healthy 33 to Sulieman Benn, while both the batsmen contiue to bat to bat perfectly, with Watson nearing his half-century. OUT! Aaron Finch c Jason Holder b Sulieman Benn 33 (38)

Australia, although they lost the T20I series against India back home, they were strong enough to bounce back, as they toured South Africa for a three-match T20I series and managed to tame the Proteas in their backyard, while Australia won the series 2-1. They will look to come up with a similar performance as such as they look to win their maiden World T20 crown. West Indies, on the other hand, who have been in a moderate form in this format of the game, drew the two-match T20I series against Sri Lanka earlier in 2015, and would look to get things straight as they aim to repeat the heroics of the 2012 World T20 winning championship team and become the first team to win the title twice. 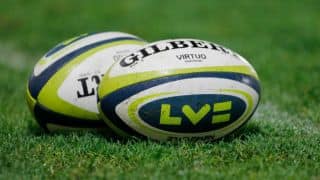