Australia look to seal victory on the final day of the tour match at Canterbury.

(Can Kent bounce back or will the Australians be too hot to handle? Catch Live Cricket updates here.)

Mitchell Claydon played a lovely cameo to give the Kent fans something to cheer about, but Steven Smith snared three wickets as Australia win by a humongous 255 runs. England have reason to be fearful. The Ashes come closer.

Kent are unravelling here. Ben Harmison, Adam Ball, and Adam Riley are all out. Steven Smith gets in on the action as well! Australia two wickets away from a thoroughly convincing victory here!

Sam Billings was not able to make much of an impression, but Ben Harmison (brother of Steve) is grinding it out. He is on a 73-ball 21 at the moment. He doesn’t seem to want to score runs as much as survive.

Daniel Bell-Drummond went absolutely ballistic after lunch. He smashed a superb ton but was out LBW to Ryan Harris. Ben Harmison is playing a painfully slow innings.

It’s lunch and Kent have done reasonably well so far. Australia have picked up wickets at regular intervals and have two more sessions to wrap the innings up and register a win.

Selectors, are you watching? Mitch Marsh picks up a wicket after scoring a superb ton yesterday! Looks like we might have two Marshes playing The Ashes this year!

Daniel Bell-Drummond continues to impress, and Rob Key has started well also. Joe Denly was cleaned up by Peter Siddle for a 31-ball 22. OH HE’S GONE! Rob Key is knocked over, Fawad Ahmed gets his man!

Kent have begun on a bright note after Australians set them a target of 550. It is unlikely that Kent will get there but it gives Australia a good challenge.

Hello and welcome to CricketCountry’s live blog of the fourth and final day of the tour match between the Kent and the Australians at Canterbury on Sunday. Australia finished on a score of 322 for the loss of four wickets at the end of the third day, with Mitchell Johnson and Brad Haddin batting on scores of 27 and 11 respectively.

Mitchell Marsh top-scored for the Australians on the third day with a 94-ball 101 before retiring himself out, smashing 12 fours and five sixes during his blazing innings. He shared a 153-run partnership with Shane Watson (81 off 76) for the third wicket that helped set the Australians well on course on setting a major target. Both Watson and Marsh will be competing for a spot in the playing eleven in the first Test in the role of the seam-bowling all-rounder.

Adam Riley effected three dismissals as Haddin and Johnson steadied the innings after a couple of quick dismissals. Australia currently have a lead of 549 runs, and will be expected to declare soon on the final day. 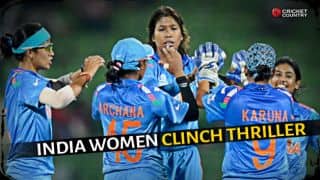 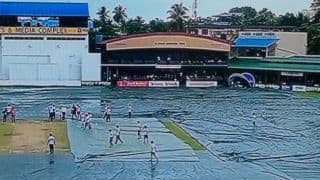