It all went well for Bangladesh until it took another Shahid Afridi blitz to make the next two matches of the Asia Cup 2014 inconsequential. It’s all a matter of pride now for Bangladesh as they seek to muster at least one victory in the tournament being the hosts. And it couldn’t have been a harder task than to face the team in form in the Asia Cup — Sri Lanka.

To be fair to the hosts, they played above expectations against a mediocre-effort by the Pakistan bowlers. The shorter boundaries have further made the batsmen look more monstrous than they are. The mishits went comfortably for a six. The hosts got carried away and allowed the momentum to slip in all of their three previous matches.

Against Sri Lanka, though they have nothing to lose from the tournament’s point of view but there’s a lot of criticism to be dealt with. The frustration was evident in the previous match when Mushfiqur Rahim brought in wholesale changes in the playing XI. The return of Shakib Al Hasan has made them stronger but the ability to grasp a match-winning situation has been missing.

In a dead rubber, the pressure is clearly on Bangladesh to punch above their weight again and hope for a much more disciplined performance with the bat. 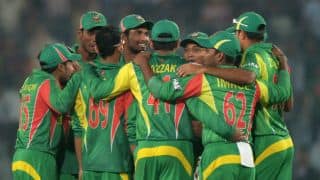