Catch the live updates of the fifth ODI between Bangladesh and Zimbabwe here.

(Will Bangladesh complete a 5-0 whitewash, or can Zimbabwe pull one back? Catch live cricket scores of the fifth ODI here)

Bangladesh 130/5 | Overs 24.3
Mahmudullah 51 (55), Sabbir Rahman 13 (16)
There it is! Bangladesh have completed a 5-0 humiliation of Zimbabwe as they win this game by a margin of five wickets!
Bangladesh 116/5 | Overs 23
Mahmudullah 35 (47), Sabbir Rahman 12 (15)
Bangladesh are cruising to a win and a clean sweep unless they lose few more wickets and land up in trouble. 17 runs needed now.
Bangladesh 73/4 | Overs 15
Mahmudullah 29(36), Sabbir Rahman 0(2)
OUT!!!! It’s the skipper, Mushfiqur Rahim who departs for just 11 as Bangladesh lose half of their side while chasing just 129. However, they are pretty near to chase it down as they need 35 from 31 overs.
OUT! Mushfiqur Rahim 11(23) c Taylor b Chatara
Bangladesh 73/4 | Overs 15
Mahmudullah 17(24), Mushfiqur Rahim 5(12)
Bangladesh are off to a shaky start but somehow manage to hold on to their grip and the gameplay as they look to chase down a real small total of 129 set by Zimbabwe after a disastrous batting display as both the team go in for lunch.
Bangladesh 58/4 | Overs 13
Mahmudullah 12(20), Mushfiqur Rahim 0(4)
GONE!!!!! It’s the big one. It’s Shakib Al Hasan who departs without scoring anything. Full and wide from Panyangara, Shakib goes for a drive, edges it to first slip.
OUT! Shakib Al Hasan 0(8) c Masakadza b Panyangara

#BanvsZim 5th ODI LIVE: Tamim is removed by Panyangara. Souma Sarker makes his debut for the @BCBtigers at no.3. pic.twitter.com/vSikDn5i4N

Bangladesh 47/3 | Overs 10
Mahmudullah 4(14)
THIS IS GOING DOWN TO THE WIRE!!!! Bangladesh have lost three wickets within their powerplay phase of the opening 10 overs. with openers Tamim and Anamul along with Soumya Sarkar, all departing for 10, 8 and 20 respectively.
OUT! Tamim Iqbal 10(18) c Mire b Panyangara, Anamul Haque 8(25) c Masakadza b Chatara, Soumya Sarkar 20(30) c Sikandar Raza b Chatara

Zimbabwe 99/2 | Overs 18
Vusi Sibanda 33(40), Brendan Taylor 3(6)
GONE!!!!!!! It’s the big man, Hamilton Masakadza who doesn’t last long and quickly departs after scoring his 25th ODI fifty and doesn’t last long to convert it to a big one. It’s skipper, Brendan Taylor who makes his way in.
OUT! Hamilton Masakadza 52(54) b Jubair Hossain
Zimbabwe 60/1 | Overs 10
Hamilton Masakadza 38(32), Vusi Sibanda 11(14)
No harm done after an early setback to Zimbabwe in the form of Sikandar Raza as Sibanda and Masakdza are on a roll and near a 50-runpartnership for the second wicket. 50 comes up for the team as well.

#BanvsZim 5th ODI LIVE: Raza gives a catch to Mushfiq off Mashrafe, almost like a catching practice! 1 down Zim! pic.twitter.com/Aqp9MTDdqI

Hello and welcome to CricketCountry’s coverage of the fifth and final One-Day Intentional (ODI) between Bangladesh and Zimbabwe at Dhaka on Monday. The hosts are 4-0 up in the series, and will be looking to complete their 10th ever ODI series whitewash.

Bangladesh have had a great time against Zimbabwe, having beaten them in the Test series and then in the first four ODIs as well, quite comprehensively. Anamul Haque and Arafat Sunny have been impressive, while Shakib Al Hasan has been excellent as usual.

Zimbabwe have fared poorly in every department since the start of the series. Considering the batting department, only skipper, Brendan Taylor, has been the successful one so far scoring 153 runs from the four matches with his highest score being 63 at an average of 38.25. In the bowling, it is Tinashe Panyangara who has been impressive with the seven wickets he has claimed from three matches at an average of 24.42 and an economy of 5.70. 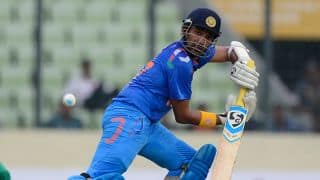 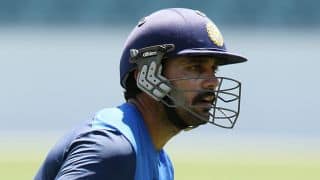 India tour of Australia 2014-15: India to remain in Adelaide