Bangladesh will aim to maintain their winning momentum against Zimbabwe in the second ODI.

Bangladesh will aim to maintain their winning momentum against Zimbabwe, when they clash with the African side in their second One-Day International (ODI) at Chittagong on Sunday.

In the first ODI, Shakib Al Hasan starred with bat and ball to lead Bangladesh to a crushing 87-run victory in their first ODI against Zimbabwe in Chittagong on Friday. Shakib scored 101 off 99 balls to lead the team to 281-7 and then grabbed 4-41 as the home side dismissed Zimbabwe for 194 in 42.1 overs to take 1-0 lead in the five-match series, AFP reported.

Shakib shared 148-runs in a record fifth-wicket partnership with Mushfiqur Rahim to help Bangladesh recover from 4-70 to a competitive score after they were put in to bat first. Shakib, who also had a hand in Bangladesh’s previous highest fifth-wicket stand of 119 runs, against South Africa in Dhaka in 2008, struck 10 fours.

Rahim made 65 off 72 balls with the help of two fours and as many sixes. Debutant Sabbir Rahman provided a late sparkle hitting an unbeaten 44 off 25 balls, which included three fours and three sixes. 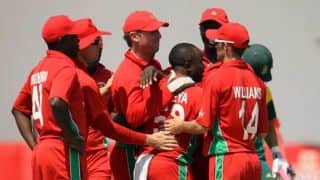