Catch live scores and updates from the second Test between Bangladesh and Zimbabwe here.

BAN 193/3 | Overs 90
Tamim Iqbal 74 (250), Shakib Al Hasan 13 (21)
Stumps, Day 2. Good day from Bangladesh’s point of view comes to an end. Tamim Iqbal has been the star of the day so far with 74 runs while Mahumudullah too was good as he scored 56. However, it was tough luck for Zimbabwe who bowled well only to be well defended by the Bangladesh batsmen.
BAN 180/3 | Overs 84
Tamim Iqbal 70 (233), Shakib Al Hasan 4 (2)
OUT!!!!!!!! Mahmudullah has to depart as he fails to convert his fifty into a big one. Iqbal still there to support the Bangladesh innings as he gets stronger in this match on this day after every ball. It’s the third one down for the hosts as all-rounder Shakib walks in.
Mahmudullah 56 (152) lbw b Panyangara
BAN 167/2 | Overs 80
Tamim Iqbal 66 (222), Mahmudullah 53 (141)
It’s the fifty for Mahmudullah. Good gameplay and wasn’t at all ambitious as he played comfortably his natural and defensive game. Iqbal on the other hand continues to play slowly and steadily as he moves up to 66 of a missive 222 balls.
BAN 150/2 | Overs 75
Tamim Iqbal 59 (206), Mahmudullah 42 (127)
No harm done to the Bangladesh innings on the third session of the day so far as the 150 comes up for the team. Mahmudullah still waiting for his fifty at 42 while Iqbal continues to play a slow innings.
BAN 142/2 | Overs 71
Tamim Iqbal 58 (201), Mahmudullah 40 (108)
Good 10 overs on the post-tea session to start off. No harm done to the home team as Bangladesh ride comfortably, courtesy of Iqbal’s unbeaten 58 and Mahumudullah’s unbeaten 40, who’s nearing his half-century as well.
BAN 127/2 | Overs 61
Tamim Iqbal 50 (169), Mahmudullah 29 (80)
Tea, Day 2. Another good six overs for Bangladesh. Fifty up for Iqbal and it comes off 169 deliveries, which has been an extremely long innings. However, it has been a sloe gameplay in this session from the batsmen as they have been very sensible with the bat.
BAN 116/2 | Overs 55
Tamim Iqbal 45 (157), Mahmudullah 23 (56)
Batsmen continue to play sensibly and wish not to take any undue risks or go after the bowlers. However, the fifty is not yet up for Iqbal in the last five overs but he is well on course.
BAN 108/2 | Overs 50
Tamim Iqbal 43 (140), Mahmudullah 18 (43)
Another decent five overs from Bangladesh’s point of view as the two batsman continue to play comfortably. Meanwhile, Tamim Iqbal is almost near his fifty as he is currently on 43.
BAN 101/2 | Overs 45
Tamim Iqbal 39 (125), Mahmudullah 15 (28)
The 100 comes up for the hosts. With an early setback in the post-lunch session in the form of Mominul Haque, Iqbal and Mahmudullah continue to bat comfortably as they need to steer the Bangladesh innings forward and make sure that they don’t lose wickets at regular intervals as it would only help the Zimbabwean bowlers and would be of no good to the hosts.
BAN 84/2 | Overs 39
Tamim Iqbal 34 (110), Mahmudullah 6 (7)
GONE!!!!!!!! Mominul Haque departs for 35, falling 15 short of his half-century. Short ball with an extra bounce, he went to defend it, but the ball poped up flew in the air to be comforttably taken by the bowler himself. Two down for the hosts.
Mominul Haque 35 (101) c & b Panyangara
BAN 69/1 | Overs 33
Tamim Iqbal 28 (94), Mominul Haque 32 (88)
Post Lunch session kick off on a goo note so far for the Bangladesh team as both the batsmen continue from where they stooped and make sure that they don’t suffer a setback and help Zimbabwe gain control
BAN 55/1 | Overs 25
Tamim Iqbal 25 (76), Mominul Haque 23 (58)
Another good five overs from Bangladesh’s point of view as the fifty comes up for the team. Both the batsman have played good so far adjusting to the early morning conditions and reading properly the Zimbabwean bowlers, occasionally punishing the loose balls for boundaries.
BAN 44/1 | Overs 20
Tamim Iqbal 23 (61), Mominul Haque 16 (43)
Bnagladesh slowly moving up their total on the board along with the batsman. Iqbal and Haque making sure that they stick on to their original gameplay and play comfortably without going for any undue risks that is simply not needed at this stage.
BAN 19/1 | Overs 15
Tamim Iqbal 15 (46), Mominul Haque 9 (28)
Early set-back for Bangladesh as they lose Sahmsur Rahman early. However, it’s just the beginning and there is nothing to panic as both batsman at crease currently are making sure that no further setbacks are suffered and they steer the innings comfortably in this session.
BAN 17/1 | Overs 12
Tamim Iqbal 13 (41), Mominul Haque 1 (13)
Tinashe Panyangara gets the first strike for Zimbabwe by dismissing Shamsur Rahman. Bangladesh have been dealt a blow at the very beginning of the first innings.
OUT! Shamsur Rahman lbw Chigumbura 2 (18)
BAN 5/0 | Overs 5
Tamim Iqbal 2 (19), Shamsur Rahman 2 (11)
The second Test between the two sides sets off at the Sheikh Abu Naser Stadium in Khulna. Tamim Iqbal and Shamsur Rahman walk to open the innings for Bangladesh, while Tinashe Panyangara gets ready to bowl the first delivery of the match. Bangladesh get five runs on the board in the first five overs of the match, with two of those overs going for maidens.Panyangara and Elton Chigumbura are bowling their initial spells at the moment.

Toss: Bangladesh won the toss and chose to bat.

Hello and welcome to CricketCountry’s coverage of the second Test between Bangladesh and Zimbabwe at the Sheikh Abu Naser Stadium in Khulna. I am Ayush Gupta, and I will take you through the day’s proceedings.

The hosts have the lead in the three-match series following a tense three-wicket win in the opening Test in Dhaka when they struggled to surpass a modest target of 101 on the spin-friendly wicket.

It was only the fifth win in 86 matches for Bangladesh since earning Test status in 2000 and the second on home soil after the 226-run win against the same opponents in Chittagong in 2005. Bangladesh’s two series victories so far were the 1-0 win against Zimbabwe at home in 2005 and a 2-0 success over a boycott-hit West Indies in the Caribbean in 2009.

Rahim said his team could not afford to take victory for granted despite playing on what is expected to be another slow pitch. “The last Test ended in three days, but if we expect the same to happen here it will be a mistake,” the captain said.

Rahim sought an improved batting display to gain the upper hand in the contest between the two lowest-ranked teams in Test cricket – Zimbabwe at number nine and Bangladesh at 10. “In a Test match, one usually sees only a couple of soft dismissals, but in our case there were about five or six in Dhaka which is alarming,” he said. 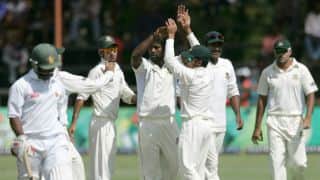 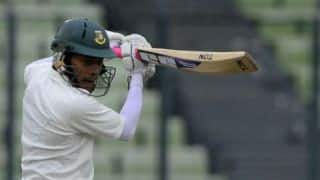