Live Cricket Score Bangladesh vs Zimbabwe, 2nd Test, Day 2 at Khulna: Bangladesh all out for 433

Live Cricket Score Bangladesh vs Zimbabwe, 2nd Test, Day 2 at Khulna: Bangladesh all out for 433

Bangladesh 433 | Overs 158.5
Rubel Hossain 0(4),
THAT”S IT!!!!!!!!!! Bangladesh have been shot out for 433. Good comeback from the Zimbabwean bowlers. The departure of Shakib saw the collapse and downfall of the lower order as they failed to capitalise on the good work by Tamim Iqbal and the all-rounder.
Shahadat Hossain 18(39) c M’shangwe b Chatara, Jubair Hossain 1 (14) lbw b M’shangwe
Bangladesh 426/8 | Overs 154
Shahadat Hossain 12 (28)
GONE AGAIN!!!!!!!!! Taijul Islam’s promising short innings comes to an end. Short outside off, Taijul looks to defend it, takes a good outside edge and straight to Masakadza at slips. Eight down for Bangladesh with two more wickets remaining. Can Zimbabwe finish it quick?
Taijul Islam 32 (44) c Masakadza b Chatara
Bangladesh 385/7 | Overs 144
Taijul Islam 4 (8), Shahadat Hossain 2 (4)
Well well well!!!!!!!! What do we see here? Two wickets in quick succession and that too the big ones. Both Shakib and Hom are dismissed with in the next two over and suddenly the hosts find themselves down with the last three men. Zimbabwe may have well strike back here and would be interesting to see how the tail-enders fair.
Shakib Al Hasan 137 (180) b Waller, Shuvagata Hom 15 (36) c Chari b Waller
Bangladesh 369/5 | Overs 140
Shakib Al Hasan 135 (177), Shuvagata Hom 7 (27)
The 350 comes up for Bangladesh as they keep getting stronger owing to all-rounder, Shakib’s brilliant run with the century and still remains unbeaten. Hom too is playing sensibly and giving the maximum strike to Shakib in order to steer the innings to a respective total as Zimbabwe bowlers continue to struggle.
Bangladesh 347/5 | Overs 135
Shakib Al Hasan 118 (164), Shuvagata Hom 2 (10)
The hundred is finally up for Bangladesh’s star all-rounder, Shakib Al Hasan as he celebrates his third ever international hundred for which he had to wait about four years with his last century coming way back in 2010 against New Zealand at Hamilton. Shuvagata Hom is the other man who is playing comfortably after Zimbabwe got rid of skipper, Mushfiqur Rahim.
Bangladesh 322/5 | Overs 130.5
Shakib Al Hasan 95(144)
GONE!!!!!!!!!! It’s the skipper who has to depart for a run out. Shakib plays the ball towards off-side and decide to scramble for a risky single, Siknadar Raza was quick enough to collect it and throw it back at the keeper to get rid of the skipper. Fifth down for Bangladesh.
OUT! Mushfiqur Rahim 11(36) run out
Bangladesh 322/4 | Overs 130
Shakib Al Hasan 95 (14), Mushfiqur Rahim 11 (36)
The hundred not yet up for all-rounder, Shakib as he still remains five short of it while skipper, Mushfiqur plays a slow knock, not going for any big strokes as Zimbabwe continue to struggle with the ball, failing to find regular breakthroughs.
Bangladesh 321/4 | Overs 125
Shakib Al Hasan 94 (131), Mushfiqur Rahim 11 (19)
A slow start to the post-lunch session as no harm is done to the Bangladesh’s innings and Zimbabwean bowlers still struggle to impress with the ball. Shakib just a stroke away from century and what a moment it would be for Bangladesh to have two centurions in a day.
Bangladesh 316/4 | Overs 121
Shakib Al Hasan 89 (119), Mushfiqur Rahim 11 (7)
Lunch, Day 2. Just a wicket in this session in the form of centurion Tamim Iqbal. Shakib too nears his century as he is currently on 89 while the departure of Iqbal makes way for the skipper, Mushfiqur Rahim.
Bangladesh 305/4 | Overs 118.4
Shakib Al Hasan 89(112).
OUT!!!!!!!!!! Finally, the breakthrough and the crucial wicket of opener, Tamim Iqbal that Zimbabwe needed. Wide outside off-stump, Iqbal goes for a cut, the ball edges at is comfortably collected by Chris Ervine at gully.
Tamim Iqbal c Ervine b Masakadza 109 (332)
Bangladesh 293/3 | Overs 115
Shakib Al Hasan 78(101), Tamim Iqbal 108(321)
Good five overs and still no harm done to the Bangladesh innings so far today. Both Iqbal and Shakib play their natural game and steer the innings. fans expecting Shakib to score a century as well as he looks well on course for it.
Bangladesh 267/3 | Overs 110
Shakib Al Hasan 56(78), Tamim Iqbal 104(314)
It all comes at the same time. Opener Tamim Iqbal has smashed his fifth ever Test century off 314 deliveries while all-rounder, Shakib AL Hasan has scored his Half-century that has put Bangladesh in control of this match as Zimbabwean bowlers are struggling to get a breakthorugh.
Bangladesh 245/3 | Overs 105
Shakib Al Hasan 46(65), Tamim Iqbal 92(297)
No harm done to the Bangladesh innings so far as the Zimbabwean bowlers have failed to get a breakthrough so far in the first hour of the second day’s play. While Shakib nears his half-century, Iqbal too nears his century.
Bangladesh 234/3 | Overs 100
Shakib Al Hasan 37(52), Tamim Iqbal 90(280)
Another good five overs for Bangladesh as they go steady and a safe innings while the batsmen make sure that they play the natural defensive game and not be ambitious during the early morning conditions where the ball could play dangerous.
Bangladesh 200/3 | Overs 93
Shakib Al Hasan 14(29), Tamim Iqbal 82(260)
Bangladesh restart the first innings play on a fresh day of the second Test and the 200 comes up for the home team. Tamim Iqbal and Shakib Al Hasan continue to bat and make sure that they continue the same strategy with which they played the last day.

Hello and welcome to CricketCountry’s coverage of Day Two of the second Test between Bangladesh and Zimbabwe at Khulna. I am Ayush Gupta, and I will be bringing you the live updates of this match. The hosts were 193 for the loss of three wickets at stumps on Day 1, as Tamim Iqbal starred with 74 off 250 balls.

Earlier during the day, Bangladesh skipper, Mushfiqur Rahim won the toss and decided to bat first. They started off with openers Iqbal and Shamsur Rahman who were off to a slow start with Rahman falling early at the score of six having been adjudged leg-before by Elton Chigumbura for just two. However, Mominul Haque, who came in at third down played a sensible innings of 35 runs to put up a 72 run partnership along with opener Iqbal at and after lunch only to fall to Tinashe Panyangara.

The post-lunch session saw Mahmudullah along with Iqbal play the session comfortably with the opener getting his half-century right in the last over before lunch. Zimbabwe had a couple of chance to go ahead with the ball only to find the decisions going against them when a review was unsuccessful. While there was one chance that could have been quite close for the visitors to earn them a wicket, however they failed to take the review. Bangladesh reached 127 for the loss of two at tea break.

The post-tea session saw another good stand between Iqbal and Mahmudullah with the latter getting his half-century as well and putting up a 95-run partnership stand for the third wicket with the opener. However, he failed to convert it to a big score falling for 56 to Panyangara. He was followed by all-rounder, Shakib Al Hasan who along with Iqbal are currently unbeaten on 13 and 74 respectively as the play came to a close on the first day.

Zimbabwe captain, Brendan Taylor made three changes in the team from the first match with debutant , Brian Chari coming in for Vusi Sibanda, Malcolm Waller for John Nyumbu and debutant, Natsai M’Shangwe for Tafadzwa Kamungozi. 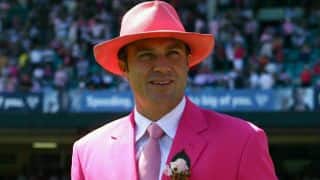