Catch Live Scorecard of Bangladesh (Ban) vs Zimbabwe (Zim), 2nd Test here
(Bangladesh look to close in on a series victory with a win in the second Test, which will be their third Test series win of all time)

Bangladesh 193/5 | Overs 61
Mahmudullah 60 (121), Shuvagata Hom 19 (47)
No harm done again as both Mahmudullah and Shuvagata hom made sure that Bangladesh do not suffer any more setbacks till the close of play for today and that’s what exactly happening. Meanwhile, Mahmudullah scored his 12th Test half-century. He had also score in the first innings.
Bangladesh 160/5 | Overs 50
Mahmudullah 41 (85), Shuvagata Hom 5 (17)
Good next five overs after Waller dismissed two in an over. Mahmudullah and Shuvagata Hom make sure that they bat for the rest of the day and earn a healthy and comfortable lead before declaring the innings for Zimbabwe to chase it down.
Bangladesh 149/5 | Overs 45
Mahmudullah 37 (62), Shuvagata Hom 2 (10)
WELL, WELL, WELL!!!!!!!!! I believe Malcolm is tearing down the Bangladesh batting order here. two wickets in an over in the form of Shakib and skipper, Mushfiqur and Bangladesh find themselves down to five with only half of the team remaining. Can they survive for the rest of the day?
Shakib Al Hasan 6 (5) lbw b Waller, Mushfiqur Rahim 0 (1) c Chakabva b Waller
Bangladesh 131/3 | Overs 40.3
Mahmudullah 27 (51)
OUT!!!!!!!!!! Mominul has to depart for 53 as Waller gets the third break-through for Zimbabwe. Fails to convert it to a big total but never-the-less a good game-play by the batsman.
Mominul Haque 53 (97) c Chakabva b Waller
Bangladesh 129/2 | Overs 40
Mominul Haque 53 (95), Mahmudullah 26 (50)
129 is what Bangladesh have score and they are going good while Mominul brings up his half-century to put the team in control as they extend their lead to 194 runs.
Bangladesh 9/2 | Overs 32
Mominul Haque 37 (75), Mahmudullah 12 (22)
Good start to the post-tea session as Mominul Haque completes his 1000 Test runs. He also becomes the quickest Bangladesh batsman to do so. Great feat achieved by him.
Bangladesh 75/2 | Overs 25.1
Mominul Haque 25 (56)
OUT!!!!!!!!! 2nd one goes down for Bangladesh and it’s the opener Shamsur Rahman who has been dismissed for 23. Outside off, ball takes the outer edge and goes to Taylor at first slip. The appeal was initially turned down but the review saved the Zimbabweans.
Shamsur Rahman 23 (71) c Taylor b Waller
Bangladesh 50/1 | Overs 19
Shamsur Rahman 18 (60), Mominul Haque 5 (30)
No harm done to the bangladesh innings after the first wicket as both the batsmen, Rahman and Haque continue to bat good on the Khulna track with the fifty run coming up for the team.
Bangladesh 28/1 | Overs 8
Shamsur Rahman 1 (24), Mominul Haque 0 (0)
OUT!!!!!!!!! First one goes down in the second innings for Bangladesh as opener Tamim Iqbal, who looked in a good flow finally ends up giving his wicket away going for ambitious shots as Panyangara earns the first break-through for Zimbabwe.
Tamim Iqbal 20 (25) c & b Panyangara
Zimbabwe 368 | Overs 135.1
Tinashe Panyangara 1(21)
THAT”S IT!!!!!!!!!!! Zimbabwe have been bowled out for 368 falling just 65 runs. However, Chkabva had his moment after he score his maiden Test century but fell for 101. Time for Zimbabwean bowlers to restrict Bangladesh to a good total in order to draw level in the series with just two days to go.
Regis Chakabva 101(225) lbw b Islam
Zimbabwe 364/9 | Overs 131.
Tinashe Panyangara 1 (16), Regis Chakabva 97 (206)
No harm done as the only barrier for Bangladesh is this final pair that could well create a problem to get rid off with. However, it is indeed good for Zimbabwe, especially Chakabva who is nearing his century and would hate the Zimbabwe innings to get over before he gets to his century.
Zimbabwe 351/9 | Overs 124.
Tinashe Panyangara 0 (1), Regis Chakabva 84 (178)
TWO MORE DOWN!!!!!!!!! The collapse is clearly visible as two more wickets in the 123rd over has brought Zimbabwe’s innings almost to a close and it’s just one barrier that separates Bangladesh from their 2nd innings lead.
Tendai Chatara 0 (5) c & b Hossain, Natsai M’shangwe 0 (3) c Rahim b Hossain
Zimbabwe 350/7 | Overs 123
Regis Chakabva 78 (170), Tendai Chatara 0 (2)
OUT!!!!!!!!! Waller has top depart for a mere six as the tail-enders begin to show their failure to withstand any bowling attack. Looks like Zimbabwe are going for a total collapse from here on with still 83 runs behind.
Malcolm Waller 6 (23) c Rahim b Hasan
Zimbabwe 339/6 | Overs 120
Regis Chakabva 78 (170), Malcolm Waller 1 (17)
With an early breakthrough at the start of the day, Zimbabwe look to gain some momentum again ahead of Bangladesh’s score of 433 as they still trail by 94 runs. Chakbva, who’s on his way for a big score has a major responsibility on his shoulders as the tail-end start to sneak in and it’s doubtful how far could they travel.
Zimbabwe 336/6 | Overs 116.1
Regis Chakabva 75 (162)
OUT!!!!!!!!!!! A breakthrough for Bangladesh on a fresh session of a fresh day and it’s Masakadza, the hero from last day whose enormous innings comes to an end as Shakib gets rid of him. Sixth down for the visitors.
Hamilton Masakadza 158 (326) b Shakib Al Hasan

Hello and welcome to CricketCountry’s live coverage of the fourth day of the second Test between Bangladesh and Zimbabwe at the Sheikh Abu Naser Stadium in Khulna. I am Ayush Gupta and I will be presenting to you the live updates from the match.

Zimbabwe closed the third day on 331 for the loss of five wickets. Hamilton Masakadza remained the highest scorer of the day as well as in this innings and the whole series so far with an unbeaten 154 off 316 balls.

Zimbabwe, who started the day on 53 for the loss of just one wicket from last day started the day on a slow note and ultimately losing opener, Brian Chari for just 25 who fell to Taijul Islam after handing a comfortable catch to Tamim Iqbal at mid-off as he charged for a big-shot against it. However, they put up a 67-run partnership  for the second wicket. This led to the arrival of skipper, Brendan Taylor, who along with Masakadza put up a 67-run partnership as well. Masakdza eventually brought up his sixth Test fifty before lunch.

As they began the post-lunch session on the score of 140 for the loss of just two, just 11 runs were added to the total when Bangladesh’s star all-rounder, Shakib Al Hasan got rid of the skipper as Taylor departed for 37. Following this, just 20 ore runs were added when Chris Ervine too departed for 17 after falling to Shakib and eight runs later, it was Elton Chigumbura‘s turn to walk back after getting dismissed by the same man. However, Masakdza didn’t panic or lose hope as he brought up his fourth Test century. The three-wicket claim by the all-rounder came as a hope that the collapse of the Zimbabwe innings was near as they reached 231 for the loss of five at tea break. 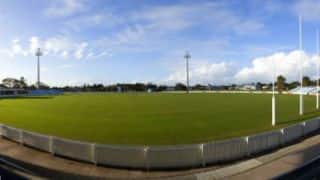