Zimbabwe 151 | Overs 51.1
Tinashe Panyangara 8 (19)
THAT”S IT!!!!!!!! Bangladesh have demolished Zimbabwe on the final day of this second Test as they win it by 162 runs. Shakib has been the star again as he claims five for 44.
Tendai Chatara 1 (4) lbw Taijul Islam
Zimbabwe 142/9 | Overs 50
Tinashe Panyangara 0 (14), Tendai Chatara 0 (2)
GONE AGAIN!!!!!!!!! No. 9 down for Zimbabwe. It’s almost over for the visitors and they are just on the brink of an embarassing defeat with the final pair down. How long could they last or how fast could Bangladesh seal it?
Natsai M’shangwe 0 (7) c Rahim b Hasan
Zimbabwe 142/8 | Overs 48
Tinashe Panyangara 0 (3), Natsai M’shangwe 0 (8)
DOWN TO EIGHT!!!!!!! Well, I believe Zimbabwe have realised it’s no way back for them as they try to give out everything they have left within themselves and they continue to crumble like a pile of cards. Bangladesh just two wickets away from a victory.
Malcolm Waller 4 (5) b Islam, Elton Chigumbura 12 (15) c Mahmudullah b Hasan
Zimbabwe 141/6 | Overs 45
Elton Chigumbura 10 (8), Malcolm Waller 4 (4)
TWO MORE DOWN!!!!!!! Zimbabwe are in serious trouble here as they are down to the final four of their playing XI with their star Batsman so far, Masakadza and Ervine, all departed. Now, Bangladesh must make sure that they finish off the innings as soon as they can while Zimbabwe can just think of either saving the test with a draw.
Chris Ervine 21 (22) st Rahim b Hossain, Hamilton Masakadza 61 (113) c Haque b Hasan
Zimbabwe 93/4 | Overs 36
Hamilton Masakadza 46 (86), Craig Ervine 3 (8)
GONE!!!!!!!! Fourth down for the visitors and it’s Regis Chakabva who has to depart for 27. Googly from Jubair Hossain, he leans forward to defend, inside edge, off the pads and taken at first slip.
Regis Chakabva 27 (78) c Mahmudullah b Jubair Hossain
Zimbabwe 74/3 | Overs 30
Hamilton Masakadza 40 (73), Regis Chakabva 20 (63)
Comfortable run by Zimbabwe and the two batsmen as they continue to play comfortable while Bangladesh too continue to bowl in a good line and length not allowing the batsmen to play freely. Maskadza nearing his half-century as he enters the forties.
Zimbabwe 60/3 | Overs 24
Hamilton Masakadza 34 (62), Regis Chakabva 13 (38)
Another sensible overs and gameplay from Zimbabwe’s point of view as no harm is done and both the batsmen have taken total control of the innings and make sure that the target is achieved.
Zimbabwe 41/3 | Overs 18
Hamilton Masakadza 24 (42), Regis Chakabva 4 (22)
No harm done after skipper Taylor departed as both Masakadza and Chakbva go strong and make sure that they steer Zimbabwe’s innings to the target of 314 set by Bangladesh.
Zimbabwe 17/3 | Overs 12
Hamilton Masakadza 4 (22), Regis Chakabva 0 (6)
GONE AGAIN!!!!!!!! It’s the skipper now who has to depart for a golden duck after facing just four deliveries. On to the leg-side, Taylor went to defend it but takes a thick inside edge, off the pads and taken at backward short-leg. Trouble for Zimbabwe as they are three down.
Brendan Taylor 0 (4) c Hom b Hasan
Zimbabwe 13/2 | Overs 8
Hamilton Masakadza 0 (6), Brendan Taylor 0 (0)
Two quick wickets down for Zimbabwe and pressure straight on the visitors to save the match and most of all themselves from suffering a possible humiliation. After Chari, it’s Raza’s turn to go back as both the openers have departed for cheap. Skipper, Taylor comes in to support Masakadza.
Sikandar Raza 9 (23) c Haque b Hasan
Zimbabwe 11/1 | Overs 5
Sikandar Raza 6 (9)
A steady start to the final innings and a chase for Zimbabwe as they look to chase down the target of 314 set by Bangladesh to level terms in the two-match Test series. Openers Raza and Chari were to make sure that they do not suffer early setbacks and stick as long as they can on the crease and score the maximum possible. But it’s Chari who has to depart for just four off Taijul Islam.
Brain Chari 4 (17) c & b Taijul Islam

Bangladesh 248/9 | Overs 83.5
Rubel Hossain 8 (8)
DECLARED!!!!!!!! Bangladesh say that’s it and with a lead of 313, it means Zimbabwe need 314 runs to win this contest and level things up in this two-match Test series. Two fall of quick wickets led to the declaration while Shuvagata Hom earned his maiden Test half-century.
Shahadat Hossain 3 (27) c Masakadza b M’shangwe, Shuvagata Hom 50 (103) c Masakadza b M’shangwe
Bangladesh 232/7 | Overs 80
Shuvagata Hom 42 (94), Shahadat Hossain 3 (21)
After two quick wickets at the start of the day, the hosts have managed to settle down for the time being with Shuvagata Hom and Shahadat Hossain taking control of the innings and batting sensibly to earn a healthy lead. Meanwhile Hom is nearing his fifty as he enters his 40’s.
Bangladesh 222/7 | Overs 74
Shuvagata Hom 35(74), S Hossain 0(5)
And another one bites the dust! Taijul mishits one to midwicket, and Zimbabwe are in a good position to clean out the hosts! Seventh wicket down now.
OUT! Taijul Islam 1(9) c Panyangara b Mushangwe
Bangladesh 222/6 | Overs 73
Shuvagata Hom 35(74), Taijul Islam 1(8)
Mahmudullah dropped! In the 70th over, bowled by Mushangwe, he tried to go over the top of mid-off, who makes a mess of it! Huge reprieve here for Bangladesh. OH BUT HE STRIKES IN THE NEXT OVER! This time the fielder at Mid-on doesn’t miss it!
OUT! Mahmudullah 71(158) c Masakadza b Mushangwe
Bangladesh 208/5 | Overs 68
Mahmudullah 67(147), Shuvagata Hom 26(63)
Bangladesh have made steady start on Day Five. Zimbabwe opened the bowling with Natsai Mushangwe and Tinashe Panyangara. Mahmudullah is looking solid in the middle, and Hom is giving him good support.

Hello and welcome to CricketCountry’s coverage of the second Test between Bangladesh and Zimbabwe on Khulna. I am Ayush Gupta, and I will be bringing you live updates from today’s all-important Day Five. Bangladesh were 201 for the loss of five wickets against Zimbabwe on the fourth day of the 2nd Test at Khulna. Mahmudullah and Shuvagata Hom are the unbeaten batsmen so far who are on the crease batting on 63 and 23 respectively. They have also put up a 56-run partnership for the sixth wicket in this innings so far.

Overall, it was an interesting day as it started off with Zimbabwe who ended Day 3 on 331 for the loss of five wickets with Hamilton Masakadza and Regis Chakabva batting on 154 and 75 respectively. However, the start was not fruitful enough as Masakadza was dismissed for 158 at the score of 336 by Shakib Al Hasan who bowled him over following which, the Zimbabwe innings collapsed like a pile of cards with the lower order failing to perform against the Bangladesh bowlers and eventually ended up getting bowled out for 368. However, Chakabva had some smile for the Zimbabweans today after he reached his maiden Test century and became the second Zimbabwean batsman to score a century batting at no. 7 after Craig Wishart.

After the post-tea session, Bangladesh started their innings on a promising note with opener Tamim Iqbal looking in a good touch. However, with an aim to score runs in a hurry, he ended up giving his wicket away to Tinashe Panyangara. Mominul Haque, who came in after Tamim got dismissed, played well and put up a 47-run partnership with the other opener, Shamsur Rahman. However, right before the tea break, the partnership was broken after Rahman got dismissed off Malcolm Waller, thanks to a successful review by Zimbabwe as the original appeal was turned down by the on-field umpire.

The post-tea session saw another record, but this time by a Bangladesh player after Mominul became the first Bangladesh batsman to score the fastest 100o runs in Test cricket and hold the seventh spot in the table of best batting average in Test cricket history. He eventually scored his 10th half-century and also put up a 56-run partnership along with Mahmudullah before getting dismissed for 54. Following him, two more batsmen in the form of star all-rounder, Shakib Al Hasan and skipper, Mushfiqur Rahim were dismissed for cheap six and duck by Waller. However, Mahmudullah didn’t panic or give up as he score his 12th half-century with the same in the first innings as well and also put up an unbeaten 56-run partnership with Hom as the play came to a close on 201 for the loss of five for Bangladesh with a lead of 266. Waller has been the star of Zimbabwe bowling in this inning with four wickets for 48. 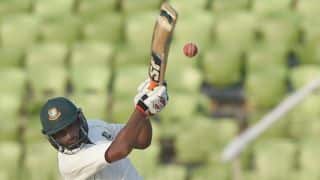