Catch the Live Scorecard of Bangladesh vs Zimbabwe, 3rd Test, Day 3
(Will Zimbabwe bounce back, or Bangladesh will continue to dominate? Catch live updates from the third Test here)

Bangladesh 23/0 | Overs 9
Imrul kayes 11(30), Tamim Iqbal 8(24)
Stumps on Day 3: These two openers have negotiated the first nine overs pretty well. Umpires have called stumps on day three. It was a mixed, Zimbabwe would have wished to get more runs on the board as four of their batsmen were dismissed just close to the hundred mark.
Zimbabwe 374 | Overs 106
T Panyangara 6 (22) ,
Jubair gets a five-for. 19-year-old leg-spinner would be happy with his performance. Now, Bangladesh will come out to bat and look to get runs on the board.
OUT!Mushangwe c Mahmudullah b Jubair Hossain 8(6)
Zimbabwe 368/9 | Overs 104
T Panyangara 0 (12) , Natsai Mushangwe 8 (4)
Chingumbura misses out on his century. He gets out for 88. Taijul gets his fouth wicket. Zimbabwe innings has been very unpredicatble and almost four players have missed out on their centuries.
OUT!!Chigumbura c Kayes b Jubair Hossain 88(130)
Zimbabwe 358/8 | Overs 101
T Panyangara 0 (7) , E Chigumbura 86 (121)
Wickets have been going in pair for Zimbabwe. Two wickets fall again. First one to go is Mutumbami and S Masakadza follows him. Meanwhile, Chigumbura has also achieved his highest score in Test cricket. He just needs 14 runs more to get his first Test century.
OUT! Mutumbami lbw b Shakib 20(35) and S Masakadza c Mahmudullah b T Islam 0(6)
Zimbabwe 339/6 | Overs 93
R Mutumbami 7 (13) , E Chigumbura 80 (108)
Taijul Islam and Shafiul Islam have bowled the five overs after tea and have conceded 16 runs. Chigumura has reached 80 and is slowly inching towards his first Test century.
Zimbabwe 323/6 | Overs 88
R Mutumbami 0(4) , E Chigumbura 71 (87)
After getting his half-century, Chakabva is finally dismissed by Shafiul Islam for 65. Shafiul has picked up two wickets now and both lbw. While on the other hand Chigumbura is firing some beautiful strokes. His presence will be crucial for Zimbabwe’s chances.
OUT!Chakabva lbw b Shafiul 65(136)
Zimbabwe 296/5 | Overs 80
R Chakabva 57 (112), E Chigumbura 51 (67)
Regis Chakabva gets to his half-century from 104 balls. He has been patient and has got the reward. Zimbabwe are slowly getting back on course. Elton Chigumbura has also achieved the his fifty. This partnership is bearing fruits for Zimbabwe.
Zimbabwe 263/5 | Overs 70
R Chakabva 42 (83), E Chigumbura 34 (36)
Chigumbura and Chakabva have got a good partnership going here. Chigumbura is scoring at a par strike-rate while Chakabva has stayed there patiently. They still need few runs to avoid the follow-on.
Zimbabwe 235/5 | Overs 62
R Chakabva 29 (58), E Chigumbura 19(13)
Third over after lunch from Jubair Hossain and he picked up a wicket. He sprayed in a full toss which damanged the leg stump. So, this partnership which looked to provide some momemtum to Zimbabwe has been broken. Chigumbura takes on Jubair Hossain now and slams him for a big six over long on. Chigumbura has come out in destructive mood. Now he swings Rubel Hossain for two boundaries in the next over.
OUT!!C Ervine b Jubair Hossain 14(23)
Zim 200/4 | Overs 56
R Chakabva 16 (14), C Ervine 12 (16)
The run-rate fell drastically after the three wickets which fell today. But four boundaries, two each both batsmen in the following overs have relieved some pressure. The 200 also come up. It will lunch on day three.
Zim 172/4 | Overs 47
R Chakabva 0(0), C Ervine 0(3)
The leg-spinner has struck twice in one over. First he gets Brendon Taylor who tried to hit the loopy delivery by Taijul out of the park but was caught. The second one was Sikandar Raza who missed out on his century and was out for 82. He edged leg-spinner from Taijul to slips. The equation has totally changed,  three wickets from four overs for Bangladesh.
OUT!!Brendan Taylor c T Islam b Jubair Hossain 1(12) and S Raza c Mahmudullah b Jubair Hossain 82(111)
Zim 170/2 | Overs 45
S Raza 81 (108), B Taylor 0 (6)
And Shafiul Islam does the job for Zimbabwe. Mushfiqur Rahim relied on the spinners to get the wickets early in the innings but that didn’t work but the fast bowler has done the job. Masakadza dismissed lbw. That was a big wicket, he was totally set to get a century there.
OUT!!!H Masakadza lbw b Shafiul 81(151)
Zim 163/1 | Overs 41
S Raza 77 (103), H Masakadza 78 (138)
Zimbabwe have done a great job so far. This partnership is the key for their innnings. Bangladesh have tried three spinners this morning but Zimbabwe batsmen have been cautious and at the same time kept the scoreboard ticking.
Zim 154/1 | Overs 37
S Raza 72 (88), H Masakadza 74 (129)
Shakib Al Hasan and Taijul Islam have bowled a few overs here but still no wickets for them. Mushfiqur Rahim brings in Jubair Hossain from one end now. And this pair has also achieved the best second wicket partnership for Zimbabwe in Tests.
Zim 133/1 | Overs 31
S Raza 59 (73), H Masakadza 66 (108)
Taijul Islma starts off the proceeding on day three of this third Test match played between Bangladesh and Zimbabwe. Raza and Masakadza are looking solid and Masakadza has also scored two boundaries this morning.

Hello and welcome to CricketCountry’s live coverage of the third day of the third and final Test between Bangladesh and Zimbabwe at Chittagong. I am Varun Arora and I will take you through the day’s proceedings.

Zimbabwe were 113 for one at stumps on Day Two in the third Test match played against Bangladesh at Chittagong on Thursday. The visitors trail by 390 runs and still have nine wickets in hand.

Zimbabwe innings started the innings brilliantly as Sikandar Raza hit Shaiful Islam for two boundaries in first over. But Brian Chari went walking to the pavilion in the next over when he nicked a delivery bowled by Rubel Hossain. Aleem Dar at first gave it not out but Bangladesh captain Mushfiqur Rahim reviewed it after Chari was declared out. Hamilton Masakadza and Raza carried on the Zimbabwe innings from the bothering spot. Both played the spinners well and also reached there respective half-centuries.

Earlier, Bangladesh was bundled out for 503 just at the brink of tea on the second day of the play. The opening partnership between Tamim Iqbal and Imrul Kayes which was worth 224-runs was not thoroughly utilized by the Bangladesh batsmen. Nine wickets could only manage to add 279 runs before the team was bundled out. Bangladesh resumed the innings at 303 for two. 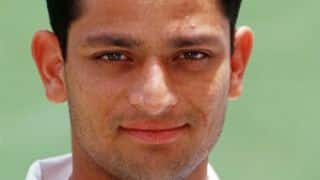 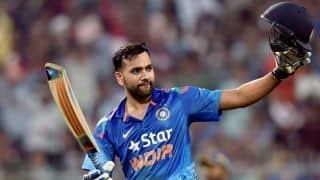