Catch the Live Scorecard of Bangladesh vs Zimbabwe, 3rd Test, Day 5
(Will Zimbabwe bounce back, or Bangladesh will continue to dominate? Catch live updates from the third Test here)

So, Bangladesh have finished this series in a dominating nature. They were a better side throughout but Zimbabwe showed hints of excellence. Regis Chakabva played like a brave man and stood on the wicket. He was unlucky to get to his second Test century. Shakib Al Hasan wins the Man of the Series award while Mominul Haque is declared the Man of the Match.
Zimbabwe 262 | Overs 85
Regis Chakabva 89 (181)
Bangladesh have won it. Three quick wickets have lead Bangladesh to 3-0 series victory.
OUT!!!Panyangara lbw b Rubel 2(24), Panyangara lbw b Rubel 2(24) and Mushangwe lbw b Shafiul 0(2)
Zimbabwe 261/7 | Overs 83
Regis Chakabva 88 (178), Tinashe Panyangara 2 (23)
Chakabva is slowly moving towards his century. If he gets there it will be his second Test century. Panyangara has done well to survive. He played 23 balls and stood calmly on the wicket.
Zimbabwe 247/7 | Overs 77
Regis Chakabva 68 (96), Tinashe Panyangara 2(15)
Mutumbami falls to Mahmudullah. Zimbabwe is slowly moving towards a third defeat in this series.
OUT!!Mutumbami lbw b T Islam 2(10)
Zimbabwe 236/6 | Overs 69
Regis Chakabva 68 (96), Richmond Mutumbami1 (6)
Craig Ervine departs. Bangladesh is slowly inching towards a 3-0 whitewash. Chakabva now slogs Taijul Islam for a big six over mid-wicket in the 69th over. Chakabva is the looking like the lone warrior here. He is battling out against the Bangladesh bowlers. It will be great if he could get his century here.
OUT!!C Ervine lbw b Mahmudullah 16(41)
Zimbabwe 217/5 | Overs 63
Regis Chakabva 54 (96), Craig Ervine 16 (36)
Chakabva has fought out hard and managed to get his half-century here. Another 46 overs still to go in this match. Zimbabwe need to stand tall and save this match.
Zimbabwe 182/5 | Overs 54
Regis Chakabva 37 (71), Craig Ervine 1(7)
Brendan Taylor is dismissed here by Taijul Islam. It was a full delivery from Taijul and Taylor outside edged it straight to point fielder. . Zimbabwe still look shaky. They have had a habit of losing wickets in pairs. Chigumbura and Chakabva will the key here. Oh no! Chigumbura is dismissed here. This is the fourth wicket of the morning. Can they survive two more sessions and keep it to a draw. Craig Ervine has come to bat now. Tha’s lunch. Zimbabwe need 267 runs while Bangladesh need five wickets. Last two sessions will be exciting.
OUT!Brendan Taylor c Shakib b Jubair Hossain 24(59) and Chigumbura c Kayes b Jubair Hossain 5(16)
Zimbabwe 150/3 | Overs 43
Brendan Taylor 17 (48). Regis Chakabva 21 (39)
Only 10 runs from the last six overs. Shakib Al Hasan and Taijul are bowling well here. Just feel, Zimbabwe are looking to negotiate a draw here.
Zimbabwe 140/3 | Overs 37
Brendan Taylor 11 (29). Regis Chakabva 17 (22)
23 runs from the last six overs. These two batsmen need to string up a big partnership here. The part-time spinner did the trick here for Bangladesh.
Zimbabwe 117/3 | Overs 31
Brendan Taylor 4 (13). Regis Chakabva 1(2)
Raza has thrown it away. That was a full toss from Hom and Raza smacked it straight to deep mid-wicket fielder. Zimbabwe are in trouble here.
OUT!! S Raza c T Islam b Hom 65(75)
Zimbabwe 110/2 | Overs 29
Sikandar Raza 60 (69). Brendan Taylor 3 (9)
That’s a big wicket for Bangladesh. Hamilton Masakadza tried to reverse sweep it and handed a catch to Mushfiqur Rahim. Zimbabwe skipper Brendan Taylor comes out to bat now.
OUT!!H Masakadza c Rahim b Hom 38(91)
Zimbabwe 90/1 | Overs 24
H Masakadza 33 (79) , Sikandar Raza 52 (60)
Sikandar Raza gets to his half-century off 56 balls. This is his second fifty of this Test match. He should convert it into a big score to help Zimbabwe get a positive result from this match.

Hello and welcome to CricketCountry’s live coverage of the fifth day of the third and final Test between Bangladesh and Zimbabwe at Chittagong. I am Varun Arora and I will take you through the day’s proceedings.

Zimbabwe reached a score of 71 for one after the end of fourth day’s play in the third Test match played against Bangladesh at Chittagong on Friday. Zimbabwe still trail by 378 runs with still a day’s play left in this third Test match.

Earlier, Bangladesh declared after they reached 319 for five with a lead of 448 runs. Mominul Haque was the star batsman for Bangladesh, as he remained unbeaten at 131 facing 189 balls. Mominul struck his fourth Test century off 156 balls. His innings was studded with 13 well struck boundaries.

Bangladesh resumed innings at 124 for one after lunch. Tamim Iqbal who was looking set to hit another century was dismissed by rookie leg-spinner Natsai Mushangwe.  Mushangwe floated a full delivery and Tamim went to cut it but he inside edged the ball onto his wickets. Mushangwe got his first success of the match. 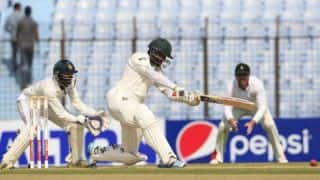