Catch Live Updates of Day Three's action from the Ranji Trophy 2015-16 clash between Baroda and Punjab at Vadodara.

Hello and welcome to CricketCountry’s live coverage of Day three of the Group B game of the 2015-16 Ranji Trophy between Baroda and Punjab, live from Motibaug Cricket Ground, Vadodara. Contrary to what experts felt before the match, Braoda batted exceedingly well on first two days of this encounter. Thanks to their openers, they have posted 475 runs in their first innings. Kedar Devdhar’s 186 and Aditya Waghmode’s 96 were the highlights. In reply, Punjab have recovered after the initial setbacks and have ended the Day two on 112/3. They were at one stage 3 for 19, with Manan Vohra, Jiwanjot Singh and Mandeep Singh back into the pavilion. Uday Kaul and Yuvraj Singh had led their recovery. Somewhere down the line Punjab may be feeling that they erred by choosing to field.  READ: Ranji Trophy 2015-16, full coverage here.

LIVE CRICKET SCORE: Punjab 212 | Baroda 475 | Overs 65.5 | BATTING: Barinder Singh 16(19): Punjab was bowled out for 212 and Baroda now have a good first innings lead of 263 runs with the final day tomorrow. If the match ends in a draw, this lead will fetch the hosts three crucial points, while Punjab will have to settle for just one point. Gurkeerat Singh who had a flying start to his innings failed to convert that into a big knock as he was out for a 36-ball 38. The last batsman to get dismissed was Siddharth Kaul. He scored 10 from 24 balls before giving a catch to Deepak Hooda off Yusuf Pathan’s bowling. OUT! Siddharth Kaul c Deepak Jagbir Hooda b Yusuf Pathan 10(24)

LIVE CRICKET SCORE: Punjab 158/5 | Baroda 475 | Overs 52 | BATTING: Gurkeerat Mann 25(23), Gitansh Khera 7(7): Punjab have lost two wickets already with a couple of hours into Day 3. Yuvraj Singh who looked good on Day 2 and was expected to carry the momentum on Tuesday was the first batsman to get dismissed. He scored 43 from 116 balls before giving a catch to Pinal Shah off Munaf Patel’s bowling. His wicket was followed by Uday Kaul’s dismissal. He added another 58 runs on board before becoming Patel’s victim. OUT! Yuvraj Singh c P R Shah b Munaf Patel 43(116) OUT! Uday Kaul c Monil Patel (Sub) b Munaf Patel 58(147)

Baroda’s 475 were possible largely due to Devdhar’s and Waghmode’s opening stand of 245. The big names like Ambati Rayudu and Yusuf Pathan failed later on but fifties by Hardik Pandya at No. 4 and Pinal Shah lower down the order helped team to reach 475. For Punjab, Deepak Bansal picked three, Gurkeerat and Barinder Sran picked two each while Yuvraj, Harbhajan and Siddharth Kaul took a wicket each.

In reply, Punjab had a horrendous start as they lost Manan, Mandeep and Jiwanjot by the time score read 19. Uday Kaul and Yuvraj have since added 93 runs for the unbeaten stand for fourth wicket. At stumps, Punjab have reached 3 for 112, with Uday batting on 47 and Yuvraj on 43. For Baroda, Irfan Pathan has picked two while Munaf Patel has taken one wicket. 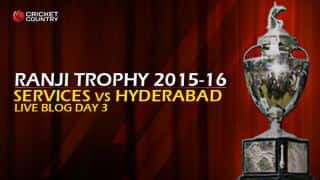