Hello and welcome to CricketCountry's live coverage of Day 4 of the Ranji Trophy 2015-16, Group A match between Bengal and Vidarbha at the Jadavpur University complex ground in Kolkata.

Hello and welcome to CricketCountry’s live coverage of Day 4 of the Ranji Trophy 2015-16, Group A match between Bengal and Vidarbha at the Jadavpur University complex ground in Kolkata. Bengal, who have managed to draw all the four games they have played so far, are looking to win this tie and earn their first victory of the season, and they look to have a good chance of taking it all. However, Vidarbha, who are currently the table toppers in the group are running high on confidence and won’t back down, even in this match, be it a stiff target. As far as the current match scenario is concerned it’s still any body’s game.

LIVE CRICKET SCORE Vidarbha 191 in Overs 91.1; BATTING: Swapnil Bandiwar 3(30): If Sathish’s presence at the crease provided any hopes for the visitors to cling on to a draw, or even pull off a near-impossible win, it has been dashed to pieces after the series of dismissals that has reduced Vidarbha to 183/9. Sarvate is trapped leg-before off the bowling of Pankaj Shaw to depart after scoring 24 off 74 balls, bringing an end to the 56-run seventh-wicket stand with Satish. Akshay Wakhare is dismissed lbw off the bowling of Pragyan Ojha, a repeat of the first innings, for 1. Finally, Sathish’s hard-fought innings comes to an end, with the batsman missing out on a century by just four runs, in a manner similar to that of Wakhare as Ojha collects his fourth wicket. OUT! Aditya Sarwate lbw Pankaj Shaw 24(74), Akshay Wakhare 1(19), Ganesh Sathish lbw Pragyan Ojha 96(201), Ravikumar Thakur c Shreevats Goswami b Veerpratap Singh 5(26)

LIVE CRICKET SCORE Vidarbha 158/6 in Overs 70; BATTING: Ganesh Satish 78(169), Aditya Sarwate 23(60): The partnership between Satish and Sarwate is now worth 47 runs at the end of 70 overs. Meanwhile, Ganesh Satish is batting on 78, and looks good to bring up his century. The pair will be crucial for Vidarbha’s chances of drawing the game, though the chances of pulling off a win seem unlikely.

LIVE CRICKET SCORE Vidarbha 113/6 in Overs 54; BATTING: Ganesh Satish 54(126), Aditya Sarwate 2(7): Vidarbha lose yet another wicket during their chase of the 297-run target, with Amol Ubarhande getting dismissed for 8 off 61 balls off the bowling of Manoj Tiwary. Meanwhile, Satish brings up his half-century, and his presence is the only hope for Vidarbha to somehow save the day. OUT! Amol Ubarhande c Shreevats Goswami b Ashok Dinda 8(61)

LIVE CRICKET SCORE Vidarbha 85/5 in Overs 34.4; BATTING: Ganesh Satish 36(78): Vidarbha seemed to be on track just a while ago, with Satish and Badrinath looking to get their half-centuries before the end of the session. That’s when Pragyan Ojha comes in, and takes a quick couple of wickets to send Badrinath and Shalabh Shrivastava back to the pavilion in no time. Ashok Dinda joins the carnage, removing Shrikant Wagh for a duck at the stroke of lunch. OUT! Subramanium Badrinath c Shreevats Goswami b Pragyan Ojha 31(73), Shalabh Shrivastava b Pragyan Ojha 1(10), Shrikant Wagh c Shreevats Goswami b Ashok Dinda 0(5)

LIVE CRICKET SCORE Vidarbha 78/2 in Overs 30; BATTING: Ganesh Satish 30(66), S Badrinath 31(72): Both Vidarbha openers are back in the pavilion. Resuming from their overnight score of 3 for no loss, both Wasim Jaffer and Faiz Fazal have been dismissed for low scores early in the final day’s play, with Vidarbha’s scorecard reading 15 for 2 in the 10th over. Veerpratap Singh has been the main cause for Vidarbha’s despair so far, having taken both wickets. The pair of Satish and Badrinath however, have helped pull the visitors back into contention for chasing the 297-run target down. The duo have added 63 for the second wicket at the end of the 30th over, with both batsmen batting in their 30s, and will have to forge a bigger partnership in order to lay the foundation for their side to complete the win. OUT! Wasim Jaffer lbw Veerpratap Singh 3(12), Faiz Fazal c Sayan Mandal b Veerpratap Singh

A career-best seven-wicket haul by Pragyan Ojha kept Bengal in line for their first win of the season as they set Vidarbha an imposing 297-run target for a win in their Ranji Trophy Group A cricket match here today. Having claimed his 23rd five-for yesterday, the left-arm spinner added two more to his tally today to return with his best figures of 7 for 58 as Vidarbha were bowled out for 202, conceding Bengal a handsome 132-run lead. Bengal were bowled out for 164 in their second essay which centered around skipper Manoj Tiwary‘s dogged 63 (127 balls; 8×4) in a strip with cracks and uneven bounce at the Jadavpur University second campus ground to set a tall target. For Vidarbha, Akshay Wakhare claimed 5/61 to return with a match haul of nine wickets. At close on the penultimate day, Vidarbha were three for no loss from two overs after bad light stopped play. 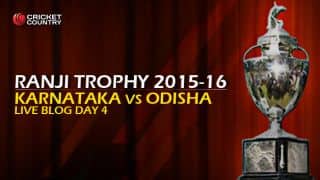