Catch live updates of the CLT20 2014 Match 15 between Chennai and Perth here.

3 IPL teams in the semis, gotta be a way to get MI in and this #clt20 will have redeemed itself. #CSKvPS

Nobody is complaining about Chinnaswamy’s short boundaries today…change the pitch, equation will always change. 🙂 I like it. #CLT20

Here’s a reminder of the scenarios ahead of a pivotal day in Group A. #LLvSD #CSKvPS #CLT20 pic.twitter.com/DPyiBII2ah

Perth Scorchers won the toss, and Scorchers will be bowling. Dhoni said he would have bowled too Perth have brought in Michael Beer as the extra spinner. Super Kings have been forced to make changes. Faf du Plessis is not well. John Hastings comes in. To facilitate the change, Mithun Manhas comes in for Ishwar Pandey.

Hello and welcome to CricketCountry’s live blog of the Chennai Super Kings (CSK) versus Perth Scorchers match 15 in the ongoing Champions League T20 (CLT20) 2014 at the M Chinnaswamy Stadium in Bangalore on Saturday. This is Sandipan Banerjee, and I will be bringing you the live updates of the match. Read PREVIEW of the CSK vs Perth Scorchers here.

According to PTI, left disappointed after their Group A match of the Champions League Twenty20 (CLT 20) 2014, was washed off without a single ball being bowled against Lahore Lions, Chennai Super Kings (CSK) would be looking to shut out Perth Scorchers tomorrow to book their last-four spot.

The Mahendra Singh Dhoni-led team stays on second spot with six points in three games, after getting two from yesterday’s match, while Lahore had registered their first points on board after losing their opening encounter to table-toppers Kolkata Knight Riders (KKR).

CSK had lost their first match against KKR before defeating the South African T20 champions Nashua Dolphins, who are winless from their two games. While Kolkata already qualifying from Group A, Scorchers have one win and a loss in their two games played. Lahore and Dolphins will really have to play out of their skins in their respective matches to hope for a turnaround in fortunes. Asian Games 2014: India off to a winning start in Table Tennis 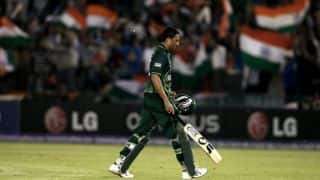