The loser of Qualifier 1 will face off against the winner of the eliminator in the second qualifier of the tournament.

Hello and welcome to CricketCountry’s live coverage of the first qualifier of the ongoing Bangladesh Premier League (BPL) 2015 between Comilla Victorians (CV) and Rangpur Riders (RR) at the Sher-e-Bangla Stadium in Mirpur, Dhaka on Wednesday. The Victorians finished on top of the points table at the end of the round-robin stage after thrashing Sylhet Super Stars by a huge margin of 71 runs in penultimate match of the group stage, bowling the latter out for 79. The Victorians and the Riders won one game each in the two games that they have played so far. Comilla hammered Rangpur by 9 wickets in the 11th match of the tournament, bowling them out for 82 before chasing the target down with chasing the target down with more than eight overs to spare. COMPLETE CRICKET COVERAGE: Bangladesh Premier League (BPL) 2015

LIVE CRICKET SCORE: Rangpur Riders 91 in 17 Overs | BATTING: Saqlain Sajib 1(2): The Riders have lost three wickets in the last four overs, with Hider taking his third wicket by bowling Thisara Perera, the pick among the Riders’ bowlers in the first innings, for 11. The Riders finally perish after Hider bowls a perfect yorker to get rid of Sunny, who is dismissed for 7, as Comilla Victorians register yet another massive victory, this time when it mattered the most! OUT! Jahurul Islam c Abu Hider b Ashar Zaidi 9(15), Mohammad Al-Amin b Andre Russell 3(8), Thisara Perera b Abu Hider 11(13), Darren Sammy b Ashar Zaidi 6(4), Arafat Sunny b Abu Hider 7(10)

LIVE CRICKET SCORE: Rangpur Riders 62/5 in 11 Overs | BATTING: Mohammad Al-Amin 0(2), Jahurul Islam 9(14): The Riders are struggling in their innings so far, losing half their side with more than 100 runs still required. Ashar Zaidi and Abu Hider have been excellent in their spells so far, while skipper Mashrafe Mortaza has been very economical. The Victorians appear set for qualifying for the final! OUT! Soumya Sarkar c Shuvagata Hom b Abu Hider 9(8), Lendl Simmons b Abu Hider 25(20), Mohammad Mithun st Liton Das b Ashar Zaidi 5(10), Shakib Al Hasan c Mahmudul Hasan b Ashar Zaidi 0(1), Mohammad Nabi c Shuvagata Hom b Mashrafe Mortaza 12(11)

LIVE CRICKET SCORE: Comilla Victorians 70/0 in 10 Overs | BATTING: Imrul Kayes 42(28), Liton Das 24(33): The Victorians are off to a great start once again, and are scoring at a rate of seven runs per over. Kayes is on the verge of completing his half-century.

The Riders however, had their revenge in their second game, bowling CV out for 132 while defending a target of 154. They would have topped the group had it not been for Comilla’s massive victory in their final game of the series, that helped them narrowly edge the Riders out on the basis of net run-rate in order to top the group. Meanwhile, Barisal Bulls and Dhaka Dynamites finished in the third and fourth positions in the group stage, and will take part in the eliminator, which is to follow this match. The loser of qualifier 1 will face off against the winner of the eliminator, which will be the second qualifier of the tournament. The winner of Qualifier 2 will face off against the winner of Qualifier 1 in the tournament final, which will take place at Dhaka.

Bollywood and cricket fraternity wish Yuvraj Singh on his birthday 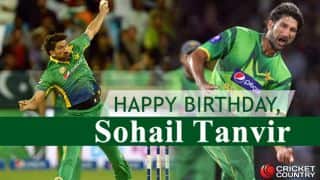