(Can the Delhi Daredevils win at home, or will Kings XI Punjab prevail over their northern rivals? Catch the live cricket scores and updates of the IPL 2015 match between DD and KXIP)

Akshar Patel comes back. DOT. Saurabh tries to defend, but misses. DOT. Played to Akshar. ONE. Slapped to point. ONE. Played to square leg. FOUR. Saurabh goes over midwicket! DD need a run to win. WIDE. And that’s that.

Shardul Thakur again. FOUR! Mayank picks up that one off middle, and whips it through cow corner. ONE. Through point. OUT! Shreyas has holed out, but what an innings it has been! TWO. Played to fine leg. DOT. Play and miss from Mayank. FOUR! And that’s 50 for Mayank, slapped through point!

Thisara Perera again. ONE. Played to long on. TWO. Got it away, he moves on to 49. FOUR. Great shot, another boundary and that’s 50 for Shreyas! ONE. Slight mis-field has allowed an extra run. FOUR! Dropped. Was that a chance? It wasn’t too far from the fielder. But nicely timed by Mayank. ONE. To third man to end the over.

Anureet Singh continues. ONE. Played to third man. FOUR! Lovely shot, Shreyas goes over mid off, just an extended drive. FOUR. This time he pokes at one outside off, deliberately played to third man. ONE. Down to mid off. WIDE. Way down leg. DOT. Play and miss outside off. DOT, NO BALL. Defended well, but Anureet has over-stepped. Free hit coming up. ONE. Good ball, just a single to long on.

Shardul Thakur again. ONE. Shreyas slices it to the off side again. ONE. Down to third man. ONE. Shreyas again looks to smash that one, but the ball just hung back. WIDE. Too far outside off. FOUR. Lovely shot through point. DOT. Nicely played, but to the fielder. ONE. To square leg.

Anureet Singh again. FOUR. Down leg, and Mayank gets it down fine leg. ONE. Played to mid on. DOT. Slower ball, Shreyas misses. It would have gone down leg though. ONE. Good fielding, direct hit, but the ball ricochets for a single. ONE. Good ball, swirling in, but well played. ONE. To square leg.

Anureet Singh continues. DOT. Good ball to start with. DOT. Oh dear, Shreyas is flat on the floor. That one hit him on the knee roll, and he lost his balance. DOT. Played to the fielder. ONE. That was off the edge, but in between the fielders. WIDE. Down leg. DOT. Defended. ONE. Played to point.

Shardul Thakur to bowl his first ball in IPL. DOT. Left alone outside off. DOT. Good ball again, swinging away outside off. SIX! Too short from Thakur, and Shreyas throws his hands at it, gets it over point. SIX! Another shortish wide one, and once again Shreyas swipes it over point! WIDE. Down leg. FOUR! Poor line, down leg and Shreyas gets it down fine leg. ONE. Inside edge to fine leg, lucky he didn’t play on.

Zaheer Khan’s comeback was a roaring success, but Nathan Coulter-Nile’s four-wicket haul was the highlight of the DD bowling. David Miller was the top-scorer for KXIP, but even he could only manage 42 off 41 balls. In case you missed out on any of the action, you can read Nishad Pai Vaidya’s innings report here: Nathan Coulter-Nile, Zaheer Khan restrict Kings XI Punjab to 118/8 in IPL 2015 encounter

Nathan Coulter-Nile to bowl the penultimate over. OUT! Akshar hits it to long on, but there was a fielder waiting for it. Miller will be on strike. ONE. Miller goes for a pick-up hoick and misses. ONE. Through the leg side. OUT! Another one, and it’s the biggie. Miller slices this through point, but he picks out the fielder. DOT. Thakur misses that one. FOUR. Inside edge down fine leg!

Angelo Mathews again. ONE. That was sad. Good fielding, direct hit, but the batsmen get an extra run for it. ONE. Played down to long on. DOT. Played to point. ONE. Short ball, quick single off the pull. ONE. Miller can’t hit it well to the deep. ONE. Down to long off.

Imran Tahir again. ONE. Single on the leg side. SIX! Huge hit over cow corner! Miller steps out and deals with Tahir in outstanding fashion. FOUR! Full toss, and Miller finds the gap this time! DOT. Good shot again, but straight to the fielder. ONE. Played through midwicket. FOUR, WIDES. That one spun past leg stump. ONE. Clipped away on the leg side again.

FOUR! David Miller smashes the first delivery towards the cover fence off Angelo Mathews. ONE! Slow ball, Miller quietly plays it down the ground. ONE! Akshar plays it to long on. FOUR! Wide outside off, Miller chases it and chips it over covers. DOT! Played to short third man. DOT to finish. 10 from it.

Imran Tahir bowls an excellent over. The batsmen manage to get just a couple of runs off his bowling. But Akshar Patel smashes him out of the park off the final delivery of that over

Amit Mishra again. ONE. Down to long on. ONE. Leading edge, but to mid off. ONE. Akshar sweeps. DOT. Was that an edge? Akshar might have survived. DOT. Can’t get it away. DOT. DOwn the ground.

Amit Mishra into the attack now. ONE. Bailey drives to long off. FOUR! Lovely shot from Miller, swept through square leg. DOT. Mishra misses the sweep this time. ONE. Played to long on. DOT. Played to the cover. OUT! Bailey misses the sweep, hit in front of the stumps, and Mishra gets his man!

Nathan Coulter-Nile again. DOT. Bailey defends. FOUR! Short and wide, slapped through point. DOT. Played to mid off. ONE. Down to third man. WIDE. Down leg, marginal call. ONE, LEG BYE. Slight appeal for LBW, but it was way down leg. FOUR. Again well played through square leg by Bailey!

Nathan Coulter-Nile comes on now. DOT. Saha looks to cut, misses. DOT. Played to point. OUT! AND ANOTHER ONE BITES THE DUST! Saha edges behind, and Jadhav takes another catch! DOT. Defended. ONE. Defended again by Bailey, just wide of the fielder. DOT. Defended.

Zaheer Khan continues. DOT. Saha can’t get it away. DOT. The ball is just not coming on to the bat at all. The spinners will be a handful on this pitch. ONE. Played to point. DOT. Slower ball again. DOT. Defended again. OUT! Vohra steps out, but only finds an outside edge to the ‘keeper!

Zaheer Khan will bowl his first ball of competitive cricket in almost a year! Virender Sehwag will face. Battle of the pros. Here we go. ONE. Good ball, slightly on the shorter side, the ball didn’t come on, and Sehwag hit it in the air but in the gap, they run one short. OUT! This time he finds the fielder! FOUR! Lovely shot, that’s placed through point first ball. DOT. The ball is not coming on to the bat at all. ONE. Played down third man. DOT. Good leave outside off.

TOSS: JP Duminy won the toss and decided that Delhi Daredevils (DD) will field first. DD are playing in lavender today to support YouWeCan, Yuvraj Singh’s cancer awareness foundation. The big news is that Zaheer Khan is finally fit, and will play in place of Dominic Joseph. Meanwhile, Saurabh Tiwary comes in for his first game of IPL 2015 ahead of Shahbaz Nadeem. For Kings XI Punjab, Virender Sehwag, Shardul Thakur, and Thisara Perera are playing.

Hello and welcome to Match 31 of Indian Premier League (IPL) 2015 between Delhi Daredevils (DD) and Kings XI Punjab (KXIP) at the Feroz Shah Kotla, Delhi, on Friday. I am Shiamak Unwalla, and I will bring you the updates from this match. According to CricketCountry’s preview of the match, this year, KXIP have had a tough time and they face another big contest against DD. Although DD have had a mixed year so far, they clearly are the favourites for this game considering the fact that they have been more consistent and reliable. With this match being played on home soil, DD would have better know-how of the conditions and would back themselves. IPL 2015 Highest run-scorer: List of best batsmen in IPL 8

KXIP have had the bowlers who have fired, but their batting has been missing in action. In Anureet Singh, Sandeep Sharma, Mitchell Johnson and Akshar Patel, they have four stable options in the bowling. However, their batting has been struggling. Things have gone to an extent that they have benched Virender Sehwag and Glenn Maxwell. Some of the other batsmen too have not been very consistent, and need to come good. IPL 2015 Highest wicket-taker: List of best bowlers in IPL 8

With this game being in Delhi, it may make sense to bring back Sehwag as he is the local man and can do well here. Having played at the Feroz Shah Kotla all his life, Sehwag would be one gunning for success. The short boundaries at the venue can be targeted by the big hitters in the group such as David Miller. Shaun Marsh could be in the mix as Maxwell could continue to warm the bench. KXIP are losing time and they need to get their act right soon. IPL 2015 Points Table & Team Standings 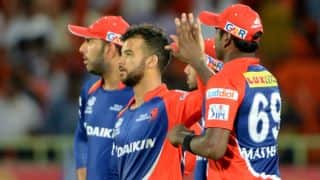