India U-19 will want to make it three from three an continue their unbeaten run whereas England will want to get to their first win.

Hello and welcome to CricketCountry’s live coverage of the fourth match of the triangular under-19 series in Sri Lanka which also features India and England. The fourth match will be played between India and England at R Premadasa Stadium, Colombo. India will be captained by the 19-year-old Ricky Bhui while England will be led by 18-year-old Brad Taylor. It shall be interesting to see the final 11 players who will get to play in this match. India, go into this match as favorites after winning both their opening ties against England and Sri Lanka, India won both the games via D/L method. India in the first match beat England by 86 runs and the host in the seocnd match by just 4 runs. England till now have lost both their matches in the tournament.

2nd innings: Chasing India’s 262 in the second innings, the English side fell short of 20 runs. The middle-order batsman George Bartlett top-scored for England Under-19 with 70 in 80 deliveries he had faced. The opening batsman Dan Lawrence started off well but could not convert that into a match-winning knock. He scored a 55 before getting run out by Rahul Batham in the 14th over. Batham also bagged three wickets and the other bowler who was handy was Mayank Dagar who also claimed three scalps.

For India in the last match, Madhya Pradesh right-hander Amandeep Khare hit a fine century as India U-19 beat their Sri Lankan counterparts by 4 runs via Duckworth-Lewis method in a tri-series match on Saturday. Batting first, India colts scored 284 for seven in 50 overs with Amandeep scoring 102 off 98 balls with 9 boundaries and a six. In reply Sri Lanka managed 250 for five after their revised victory target was set at 255 in 47 overs. Seamer Rahul Batham (2 for 32) was the most successful bowler for India.

For England in their last match, their captain Brad Taylor’s four-wicket haul went in vain as the visitors lost to Sri Lanka by 52 runs in their second match of the tri-nation series in Colombo. It is England’s second successive defeat of the tournament and places them at the bottom of the table behind India and Sri Lanka. 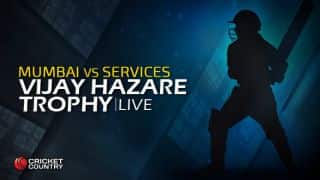