England will face India on Day 4 of the third Test match at Southampton. India were 323 for the loss of eight wickets at the end of Day 3. They require another 47 runs to save follow-on, and MS Dhoni who is batting at 50 will hold the key for India.

Stuart Broad and James Anderson combined in spectacular fashion to rattle the Indian batting order. They took three wickets each, and were helped by Moeen Ali who took two wickets.

Except Dhawan, all batsman got good starts but failed to convert them. Rohit Sharma and Ajinkya Rahane will be kicking themselves as they were not undone by good ball, but instead by poor shot selection.

England seem to be running away with the game at the moment, and India will have to buckle up in order to save the Test match. 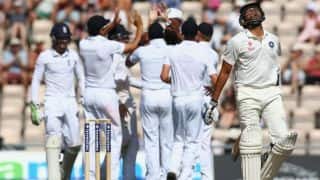 India vs England 2014, 3rd Test Day 4 Preview: A lot of possibilities have opened up 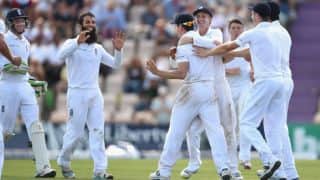