Catch all live updates of England vs MCA XI at Mumbai here.

Hello and Welcome to CricketCountry’s live coverage of England taking on Mumbai Cricket Association (MCA) XI at Brabourne Stadium, Mumbai in their final warm-up match before the Super 10 stage of ICC World T20 2016. We will be bringing you all the updates from the match. Shreyas Iyer, the highest run-scorer of Ranji Trophy 2015-16, will lead MCA, while England will be led by their regular Twenty20 International (T20I) skipper, Eoin Morgan. England played their first warm-up match against New Zealand on Sunday. They thrashed the Black Caps by six wickets at Wankhede. Batting first, New Zealand managed only 169 runs in 20 overs and in reply, Jason Roy and Alex Hales’s flying start ensured England do not struggle in their chase. LIVE CRICKET SCORECARD: England vs Mumbai Cricket Association XI, warm-up match, ICC World T20 2016 at Mumbai

Live cricket score: MCA XI 128/2 | Overs 15 | Target 178 | BATSMEN: James Vince 36(30), Jos Butler 17(9): Moeen Ali strikes, removes set batsman Jay Bista. He brings an end of Bista’s excellent innings in the 12th over. Bista was caught by Reece Topley on the fifth delivery of the over. 29 runs added in the next three overs, now the contest being purely England vs England. OUT! Jay Bista c Reece Topley b Meeon Ali 51(37)

Live cricket score: MCA XI 88/1 | Overs 11 | Target 178 | BATSMEN: Jay Bista 50(35), James Vince 17(17): Jay Bista brings up a superb FIFTY here. He scores it in 35 balls. If he stays on till the end, England will surely enter the Super-10 stage of ICC World T20 2016 with a loss. England need to dismiss this Mumbai batsman. The visitors have already used five bowlers, who have failed to dismiss this youngster, what an experience this is turning out to be for him. If MCA goes to win, Bista will have this innings in his mind for a very long time.

Live cricket score: MCA XI 70/1 | Overs 8 | Target 178 | BATSMEN: Jay Bista 46(27), James Vince 3(7): Liam Plunkett strikes in his very first over, removes the danger man, MCA XI skipper Shreyas Iyer. Chris Jordon completes te catch to leave the home team at 57 for 1 in 6 overs. The power play overs end, the field plaemnets can be done more frely by Eoin Morgan. Stokes into his second over, three dot to start, ONE RUN, Bista on strike. The next three balls go for eight runs. Plunkett back, four of his second over, Bista takes a single on the lats ball of the 8th over, wil keep strike. OUT! Shreyas Iyer c Chris Jordon b Liam Plunkett 16(14)

Live cricket score: MCA XI 25/0 | Overs 3 | Target 178 | BATSMEN: Jay Bista 15(11), Shreyas Iyer 7(7): Reece Topley opens bowling for England, just three runs off the first over. Chris Jordan from the other end, Bista welcomes him with a SIX. Three singles follows next, Bista keeps strike. Iyer so far has scored only 2 off 5 balls, contradicting his firing form of last couple of months. And a FOUR, finally from Iyer, 11 runs off the 3rd over.

Live cricket score: England 80/2 | Overs 9 | BATSMEN: Alex Hales 37(23), Eoin Morgan 1(2):- Two wickets in 2 overs for Rashid. Joe Root gives  areturn catch to leave England at 77 for 2. That dismissal saw the skipper walk in for England. Meanwhile, the Vishal Dabholkar the otehr spinner has already given 17 runs from his 2 overs. But no breakthrough for him. OUT! Alex Hales c & b Adil Rashid 37 (23)

Live cricket score: England 70/1 | Overs 7 | BATSMEN: Alex Hales 35(18), Joe Root 1(3): Adil Rashid strikes! He dismisses his countryman and English opener Jason Roy in the 7th over. Roy begins the over with four runs off the firts two balls before getting caught by MCA XI skipper. That brings in Joe Root joining at the crease. Root takes a single on the last ball, will keep strike. OUT! Jason Roy c Shreyas Iyer b Adil Rashid 32(21)

Live cricket score: England 38/0 | Overs 4 | BATSMEN: Jason Roy 20(15), Alex Hales 16(9): Another 12 runs added, Thakur is clearly struggling against these international players. Hales welcomes him with a boundary, before smashing another FOUR in the fourth delivery of the over. Dot to end from Roy, hales will now take strike.

Live cricket score: England 27/0 | Overs 3 | BATSMEN: Jason Roy 20(13), Alex Hales 6(5): David Willey is being smashed all over the park by his countrymen. Two more fours added by these two. Single to end the over, Hales will keep strike.

Live cricket score: England 16/0 | Overs 2 | BATSMEN: Jason Roy 15(10), Alex Hales 0(2): Shardul Thakur comes in from the other end for MCA XI. Thakur to Roy, WIDE. A dot and then Roy smashes him for two consecutive boundaries. The bowler makes good comeback, 2 dots to end the second over.

Live cricket score: England 7/0 | Overs 1 | BATSMEN: Jason Roy 7(4), Alex Hales 0(2): David Willey is not in the English jersey today, playing for the Mumbai side. Opens bowling for them, was smashed for a FOUR on the very second delievry of the day. Dot to end, Roy will take strike next over.

It will be interesting to watch the local side that will feature the likes of Shardul Thakur, Arman Jaffer, Jay Bista, Pravin Tambe and others, face an experienced international team. Although, Morgan and Co are clear favourites to win this tie, the 41 times Ranji Trophy champions will surely give some fight. England who are yet to win an ICC Cricket World Cup, have an ICC World T20 trophy. They beat Australia in an one-sided final in 2010 at Kensington Oval, Bridgetown, Barbados. 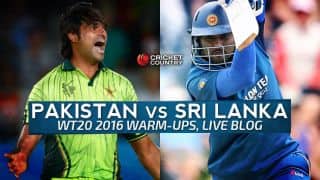