(Can England put up huge lead or will New Zealand bowlers rise the occasion? Catch Live cricket scores and updates of Day 4 of the first Test between England and New Zealand here)

England have strengthened their position in the match having secured a lead, which will more or less ensure that they save the match. Alastair Cook has crossed his 150-run mark.

400 comes up for Eland and with that they have consolidated on their lead as well. They still have Alastair Cook, who is nearing his 150 and Moeen Ali is just getting his eye in.

Jos Buttler is dismissed caught behind off the bowling of Matt Henry. Alastair Cook is still out there and batting well on well past a century and looks to bat through the day. Moeen Ali is the new batsman for England.

Ben Stokes scores the second fastest ton by an England player, bringing his feat in 85 deliveries, surpassing Ian Botham’s feat of 85 deliveries against Australia at Manchester. He is also dismissed soon after that, dismissed once again by Mark Craig.

Ben Stokes scores yet another half-century, he had scored 92 in the first innings. The partnership between him and Alastair Cook is nearing the 100-run mark. England have gone past 300 as well.

England have begun reasonably well after Tea and the match will be extended by half-hour as it was interrupted by rain today. Alastair Cook and Ben Stokes are playing well as New Zealand take the new ball.

Rain has stopped play here as Alastair Cook and Ben Stokes have managed to negotiate the overs. England’s lead has gone up to 127 runs and look set to consolidate when play resumes.

Alastair Cook scores his 27th Test ton and his fourth at Lord’s. Cook is relieved after he gets to the three-figure mark. He will now look to guide his team out of safety from here.

OUT! Joe Root is dismissed for a well made 84 as he hooks the ball straight into the hands of Trent Boult at fine leg. This brings to an end the 158-run stand for the fourth wicket. Cook is batting well at the other end as Ben Stokes is the new batsman.

England have scored a lot of runs since lunch and Alastair Cook and Joe Root have piled on the runs, giving their team a good lead. England will want to end on a high as both players approach their centuries.

Alastair Cook and Joe Root looking in good nick as they extend their lead. New Zealand bowlers are struggling to get any momentum going and as a result have not managed to pick up a single wicket.

We’re back for the post-Lunch session. England having a positive approach at the moment as Alastair Cook and Joe Root come out to bat with the intent to score some runs to pile on the lead. New Zealand will hope to pick up a couple of quick wickets in this session.

England batsmen have consolidated well and have brought up their 100 as well. Skipper Alastair Cook has also scored his half-century in the process and are on course to wipe out this deficit now.

England going at a slow rate as they look to steady the innings. New Zealand bowlers have bowled very well so far and have not given Engkand any lose deliveries to hit. England still trail by 38 runs.

Joe Root survives as Martin Guptill fails to take a clean catch at square leg off the bowling of the bowling of Trent Boult. England are slowly and stradily consolidating after losing an early wicket early.

OUT! Ian Bell is out of the third ball of the day. He fishes outside off from a ball from Tim Southee and Tom Latham takes a simple catch. Joe Root is the new batsman.

Hello and welcome to CricketCountry’s coverage of the third day of the first Test between England and New Zealand at Lord’s. This is Pramod Ananth, and I will be bringing to you all the live updates from the fourth day’s play. Live scorecard: England vs New Zealand, 1st Test, Lord’s, Day 4

Kane Williamson’s Ton put New Zealand in the driving seat as they outplayed England on the third day of the first Test at Lord’s on Saturday. Williamson’s well-constructed 132 was the centrepiece of New Zealand’s 523 all out which gave them a first-innings lead of 134. This lead can be a deciding factor in this Test match. READ: Day 3 report ENG, trail by NZ by 60 runs at stumps on Day 3 of 1st Test at Lord’s

In reply England lost two quick wickets in the start of their second innings. The home team were reduced to two for 25. But skipper Alastair Cook and Ian Bell put up a fighting partnership. This 49-run unbeaten partnership saved the day for them. England are still trail by 60 runs and with six more sessions to go in this Test match, all three results are still possible in this Test match. READ: England vs New Zealand, 1st Test at Lord’s: What lies ahead? 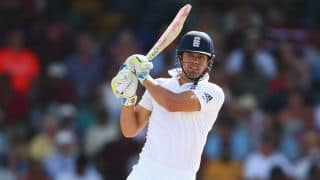