South Africa recoverd from 54 for four to 262 for seven at stumps on day one of the third Test against England at Lord's on Thursday. 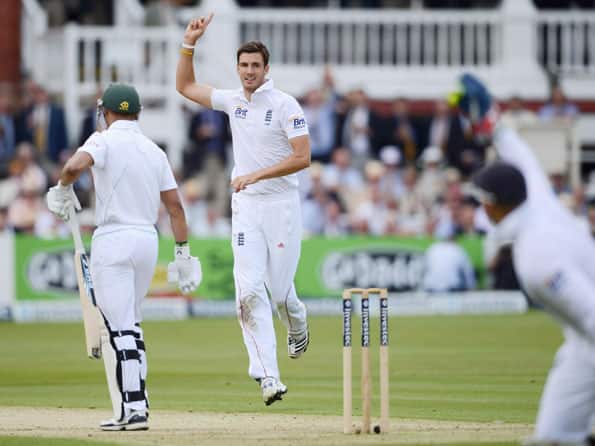 South Africa recoverd from 54 for four to 262 for seven at stumps on day one of the third Test against England at Lord’s on Thursday.

While the score, particularly the number of wickets lost, would have been uncomfortable for South Africa captain Graeme Smith, who won the toss and batted, the situation could have been so much worse.

Fast bowler Steven Finn (three for 68) rocked the tourists with a pre-lunch burst of three for three in seven legitimate deliveries on his Middlesex home ground while James Anderson took three for 57.

But come the close Vernon Philander was 46 not out, having shared a seventh-wicket stand of 72 with Duminy, who gave it away on 61.

South Africa, 1-0 up in this three-match series and needing only to avoid defeat to replace England as the world’s number one Test side, saw their powerful top order all out before lunch.

Opener Smith had made scores of 259 and 107 in his two previous Lord’s Tests.

But a third century eluded him when Anderson, with his first ball from around the wicket, had the left-hander caught behind for 14 by wicket-keeper Matt Prior although England had to review Sri Lankan umpire Kumar Dharmasena’s initial not out decision.

It was the first time in four innings this series that Smith, who on Thursday broke Australia great Allan Border’s record for most Tests as captain by leading the Proteas for the 94th match, had failed to make a fifty.

First change Finn, who retained his place at the expense of Tim Bresnan after England recalled off-spinner Graeme Swann having opted for an all seam attack during the drawn second Test at Headingley, then took over.

Alviro Petersen, who made a Test-best 182 at Headingley, was next out when he ‘gloved’ the tall Finn, getting good bounce, down the legside to Prior for 22.

It seemed he’d withdrawn his hand from the bat in time, but Petersen did not review the decision.

And 49 for two soon became 54 for four as England, whose build-up to this match had been overshadowed by their decision to drop Kevin Pietersen for sending text messsages to South African players, saw Finn make a quick double strike.

Hashim Amla, who posted a South Africa record 311 not out in their innings victory in the first Test at The Oval, was bowled for 13 by a superb Finn delivery that nipped between bat and pad to clip off-stump.

It appeared Kallis’s hand too was off the bat at the moment of impact.

But Tucker felt differently, much to the all-rounder’s visible disbelief, and England captain Andrew Strauss had yet more reason to celebrate his 100th Test and 50th as skipper.

AB de Villiers and Jacques Rudolph put on 51 for the fifth wicket.

Rudolph, carelessly, was bowled off an inside edge, hitting across the line by Swann for 42 and, three balls into the new ball Duminy, not moving his feet, wafted at an Anderson ball well outside off-stump and was caught behind, having batted for nearly three hours.

There was a bizarre end to the day’s play when a power cut all round Lord’s saw several floodlights fail, with the umpires going off for bad light.

Catch live score and ball-by-ball commentary of day two of the third Test match between England and South Africa at the Lord s, here

ICC must have window for IPL, feels Rahul Dravid