England play Sri Lanka in the fourth One-Day International (ODI) at Lord’s in London on May 31, 2014. England lead the five-match ODI series 2-1. England thrashed Sri Lanka in the third ODI to win by 10 wickets at Old Trafford. Sri Lanka were bowled out for 67 as only three batsmen reached double figures. England chased down the target in 12.1 overs to take the lead in the series.

This came as a surprise as England themselves were bundled out for 99 in the second ODI at Chester-le-Street. They were chasing a 258-run target and lost by a massive 157 runs. This proves that anything is possible and either team can seize the opportunity to get a win. Chris Jordan was the star for England in the third ODI as he took five wickets for 29 runs.

Alastair Cook’s England had won the first ODI by 81 runs via Duckworth-Lewis method at The Oval in London. The fifth ODI will be played in Birmingham at Edgbaston on June 3. Cook would be hoping that the series is won before that. Sri Lanka captain Angelo Mathews would look for a comeback and level the series. 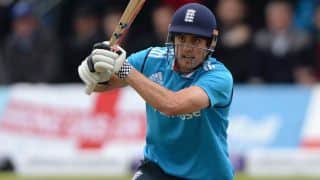