The team from West Indies will face England in the first of a three-Test series at Lord's on Thursday. The batting of the visiting side is likely to determine the course of the match 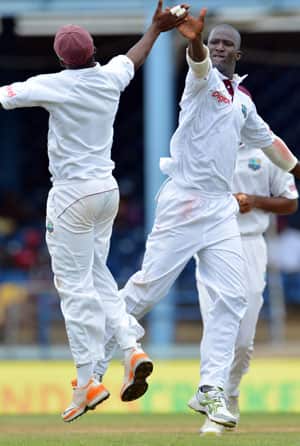 The team from West Indies will face England in the first of a three-Test series at Lord’s on Thursday. The batting of the visiting side is likely to determine the course of the match

English bowlers are expected to thrive under seaming conditions at home. West Indies have registered only two wins in the last 30 Tests since beating England in 2009.

Kieran Powell made his second first-class hundred in West Indies’ 10-wicket defeat by the England Lions at Northampton last week, a match where number four Darren Bravo made two fifties.

However, Powell’s opening partner Adrian Barath and Kirk Edwards managed just 26 runs between them at Northampton, having only compiled 16 and eight respectively in the near washout against Sussex at Hove.

A lot would depend on Shivnarine Chanderpaul, who is currently the world number one batsman, to help West Indies give a tough fight to the home side.

There has been talk of promoting Chanderpaul up the order but it appears he is set to stay put – at least for the time being.

Although the stand-off between the West Indies Cricket Board and Chris Gayle came to an end, the Jamaican would be joining the team only after his commitment with the Indian Premier League comes to an end.

The tourists, whose three leading pacemen – Kemar Roach (ankle), Fidel Edwards (back) and Ravi Rampaul (stiff neck) – have all overcome minor injury concerns, boast some firepower of their own.

England will be keen to make a commanding start after seeing their status as the world’s number one Test side diminished somewhat during a recent 3-0 defeat by Pakistan in the United Arab Emirates and a 1-1 draw in Sri Lanka.

England, with five seamers in good form in their squad, face some awkward selection decisions.

England win toss and elect to bowl against West Indies

Adam Gilchrist returns as Chennai put in to bat