England and West Indies look to get their combinations right ahead of ICC World Cup 2015.

(Can West Indies change their fortunes and get off to a winning start or will England prove too hot for them? Catch Live cricket scores here)

England 125/1 | Overs 22.5: Thats it! It’s all over at Sydney. England cruise to victory by nine wickets and didn’t give West Indies a chance in the entire game. They won the match with over 27 overs to spare. West Indies must now return to their drawing board, analyse the match and make sure that they do well in the next match. For England, they just need to continue playing like this.Ian Bell and James Taylor remain unbeaten.  Ian Bell 35 (67) James Taylor 29 (28). Here’s our match report

England 95/1 | Overs 16: England have started well after the dinner break. Ian Bell and James Taylor look well on course to take England to a comfortable victory. Moeen Ali was the only setback for England as he was dismissed for a 43-ball 46 earlier. England have never looked in trouble as West Indies’ bowling has been a touch wayward at times. Ian Bell 25 (45) James Taylor 7 (10)

England 80/1 | Overs 14: At the dinner break England have reached a commanding position as they are 80 for one. They need just 43 more runs to win. Ian Bell and James Taylor are batting and look at ease as they aim to stay there till the end. Moeen Ali was the only wicket to fall for 46, but that will not deter England from reaching the small target. West Indies were earlier bowled out for 122 in 29.3 overs. Ian Bell 21 (38), James Taylor 1 (3)

England 70/1 | Overs 11.5 Overs: OUT! West Indies finally get a breakthrough as they have managed to dismiss Moeen Ali for 43-ball 46. England are however in a comfortable position and would be delighted with the fact that Moeen got to spent some time in the middle. Ian Bell will hope that he bats through the innings along with James Taylor, who comes in at No.3. Moeen Ali c Bravo b Roach 46 (43)

England 59/0 | Overs 10: England bring up their 50 without losing a single wicket as sensible batting from Moeen Ali and Ian Bell is getting England closer and closer to the target. Moeen is looking the aggressive out of the two but Bell at the other end is playing a steady innings as looks to stay there till the end. Ian Bell 37 (36) , Moeen Ali 37 (36)

England 34/0 | Overs 6: England are easing towards the target of 123 as openers Moeen Ali and Ian Bell are playing good, sensible cricket at the moment. They are not taking any chance and at the same time getting the runs at a reasonably good speed. West Indies bowlers are struggling to control the run flow at the moment. Ian Bell 10 (16), Moeen Ali 14 (21)

England 22/0 | Overs 4: Drama at Sydney! Moeen Ali dismisses Moeen Ali but it turns out to be a no-ball. This just adds to West Indies’ woes as they have had an ordinary day on the field so far. West Indies will hope to put this incident behind them and bowl well in their effort to defend a small total. Ian Bell 5 (11) Moeen Ali 8 (13)

England begin their run-chase with Ian Bell and Moeen Ali. England need just 123 runs to win the match and it shouldn’t be a problem considering the fact that have excellent batsmen and they bat reasonably deep. England manage to get six runs from the very first over in their pursuit of the modest target.

England should have no qualms as such in chasing down this modest target. On the other hand, the West Indies will be looking to get some wickets and try and put England in some kind of pressure. Here’s is our innings report for the England vs West Indies clash here.

West Indies 122 | Overs 29.3: OUT! Pathetic performance by the West Indies team with the bat as they have been bowled out for just 122 by England in this game. Chris Woakes claimed five wickets for just 19 runs off his 7.3 overs, and England will be really pleased with their effort in this contest. A win here will give immense confidence to the side led by Eoin Morgan, and for the West Indies, there is certainly lot left to be worked out. A Russell c Jordan b Woakes 7 (13)

West Indies 120/9 | Overs 28.2: OUT! Yet another wicket falls and it’s the skipper Jason Holder this time. Steven Finn’s delivery gets some extra bounce and Holder manages to get an edge and then goes into the hands of Ian Bell at second slip. With one more wicket left, West Indies will hope that heir bowlers can do some damage when their turn comes. Jason Holder 1 (3) c Finn b Finn 1 (3)

West Indies 119/8 | Overs 27.3: OUT! West Indies lose yet another wicket as Lendl Simmons, who was batting beautifully is caught at covers by James Tredwell extremely well. The ball was struck nicely and Tredwell dove forward and took an extremely low cstck to give Chris Woakes his fourth wicket of  the match. Simmons had scored a huge six of Tredwell in the 26th over to break the shackles. It’s just a matter of time before West Indies are all out now. Lendl Simmons 45 (55) c Tredwell b Woakes

West Indies 99/7 | Overs 25: At the half-way stage, West Indies are currently struggling to survive as the England bowlers are all over them at the moment. England have not bowled a single bad delivery and in spite of conceding the occasional boundary here and there, England have managed to pick up wickets at regular intervals. West Indies will be utterly disappointed with their performance and will look to their bowling to give them some sort of boost.  Lendl Simmons 29 (44) Andre Russell 3 (6)

West Indies 90/7 | Overs 22.5: OUT! England continue their dominance as West Indies find it difficult to preserve wickets and score runs at the same time. Darren Sammy is dismissed, which gives Ravi Bopara his first wicket after the previous ball went through the slips for four.  England bowlers are doing a commendable job at the moment and want to finish off the innings as early as possible. West Indies don’t seem loke they have read the conditions properly and England having played a series recently, seem to have acclimitised very well. Darren Bravo c Tredwell b Bopara 12 (19)

West Indies: 67/5 in 17 .1 Overs: OUT! England in commanding position as Jonathan Catrer is bowled off the bowling of James Tredwell off his very first ball of his spell. The pair of Jonathan Carter and Lendl Simmons are played some good strokes and  tryiedto get their team back on track. The England bowlere are not giving the batsmen any respite, which has paid off very well at the moment. Darren Sammy now joins Lendl Simmons on the field.  Jonathan Carter 7 (15) b Tredwell

West Indies 51/5 | Overs 13.3: England are right on top at the moment as Denesh Ramdin has been dismissed for just for six off 24 deliveries as he no longer could sustain the accurate bowlingfrom England. Chris Jordan gets his first wicket and it’s a wicket he would be extremely proud of as it was an excellent delivery, which went between bat and pad. West Indies have lost half their side inside 14 overs and are on the cusp of being dismissed well within 50 overs. Denesh Ramdin b Jordan 6 (24)

West Indies: 44/4 | Overs 11: West Indies have struggled till now and now have to perform out of their skins to get to a good total at the moment. Denesh Ramdin and Lendl Simmons are looking to rebuild the innings after a poor show by their top-order batsman. England bowlers have not given away anything so far. Denesh Ramdin 2 (13) Lendl Simmons 4 (11)

West Indies: 35/4   | Overs 7.1: England are not able to make any further inroads as West Indies have managed to strike a few quick boundaries and have some sort of momentum in their innings, until Chris Woakes dismissed Dwayne Smith for 21 off 23 balls off the last ball of the seventh over. West Indies have not managed to read the pitch very well so far. Woakes picks up his third wicket. Steven Finn then bowls Marlon Samuels in the first ball of the fresh over to send back Marlon Samuels for 10  Dwayne Smith 21 (23) c Bell b Woakes 21 (23); Marlon Samuels 10 (19) b Finn

West Indies: 16/2 | Overs 4: Dwayne Smith has scored two boundaries in the fourth over off the bowling of Steven Finn and West Indies seem to have gotten some momentum into the game after losing two wickets in the very first over. Smith and Marlon Samuels will have to make sure that they don’t lose any further wickets. Dwayne Smith  13 (13)  Marlon Samuels 1 (9)

West Indies 1/2 | 0.4 Overs: OUT! Darren Bravo is out first ball. Excellent bowling from Darren Bravo as he edges one out swinger ball from Chris Woakes into the hands of wicket-keeper Jos Buttler again. West Indeis in deep trouble at the moment. England will be delighted with this start they have made to this match. Darren Bravo c Buttler b Woakes 0 (1)

West Indies 1/1 | 0.3 Overs: OUT! Chris Gayle is out for duck in the very first ball. He plays the ball going down the leg side and edges the ball kisses the gloves and goes into the hands of wicket-keeper Jos Buttler. Early blow for West Indies as their star batsman is out without troubling the scorers. Chris Gayle c Buttler b Woakse 0 (1)

Dwayne Smith and Chris Gayle have walked out to open the innings for West Indies after skipper Jason Holder won the toss earlier and elected to bat first. England have named a playing 11, with James Anderson and Stuart Broad missing whereas West Indies will test their entire squad during this warm-up match.

Hello and welcome to CricketCountry’s coverage of the ICC World Cup 2015, 4th warm-up game between England and West Indies from Sydney. I am Pramod Ananth and I will bring you the live updates of the match.

After the sacking of their former captain Alastair Cook, England are currently at a transformation stage. They have a new captain in Eoin Morgan and his troop had put in a commendable performance in the recently concluded series, which featured Australia and India. Although England lost in the final, they can take solace from the fact that they did a commendable job. They still have the experience to perform well in the World Cup and they have the chance to prove their worth and get their combinations right in the first warm-up match against West Indies at Sydney. ICC Cricket World Cup 2015: SCHEDULE & MATCH DETAILS

West Indies on the other hand are coming at the back of a crushing series defeat at the hands of South Africa. They will be low on confidence at the moment and will want to make full use of these warm-up matches. Their new captain Jason Holder has not had enough time to stamp his authority on the team. He still has the experience of former skipper Darren Sammy, Marlon Samuels and hard-hitting Chris Gayle at his disposal, who can be extremely lethal on their day. West Indies certainly do not lack experience but they have to gel well as a team. If they do that, they can go a long way in the World Cup. West Indies like England will also want to get their combinations right and these warm-up matches are a good way to test the regular playing 11 and also the bench strength. ICC Cricket World Cup 2015: POINTS TABLE 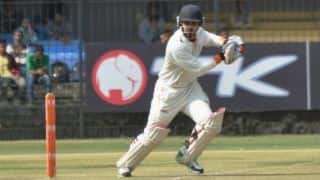 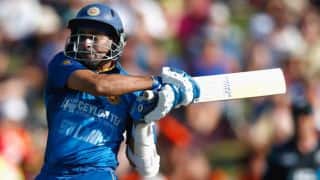