Andrew Strauss hit his second ton in as many matches for England on Saturday against West Indies in the second Test at Trent Bridge. 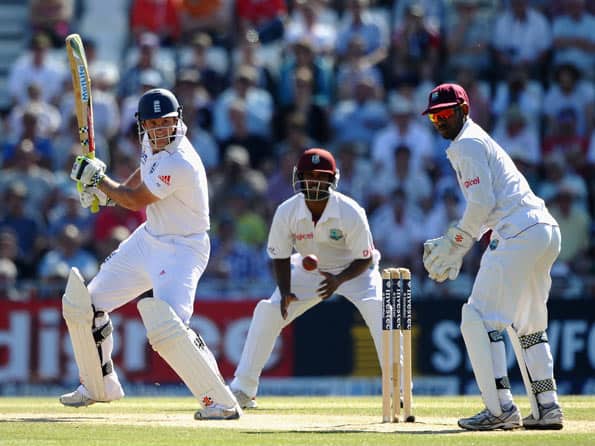 Andrew Strauss hit his second ton in as many matches for England on Saturday against West Indies in the second Test at Trent Bridge.

At the close of the second day, England were 259 for two in reply to the tourists’ first innings 370, which featured Sammy’s 106 — the all-rounder’s maiden Test century.

England were 111 runs behind, with Strauss 102 not out and Kevin Pietersen, who had struck a six and 10 fours, unbeaten on 72.

They’d so far added an unbroken 136 for the third wicket as they both cashed in on an excellent batting pitch.

Strauss, who had gone 18 months without a Test hundred before scoring 122 in England’s five-wicket series opening win at Lord’s, posted his 21st century in 96 matches at this level on Saturday.

That meant the 37-year-old left-handed opener was now just one short of the England record of 22 Test tons held jointly by Walter Hammond, Colin Cowdrey and Geoffrey Boycott.

“It’s always a special thing to get a Test match hundred,” Strauss told the BBC. “Having not had one for a while, I’m not going to get blase about that now.

“It’s nice to be back in form and I’m determined to make the most of it. It felt a lot easier today (Saturday) than at Lord’s because I wasn’t fighting against myself as much.”

Alastair Cook, Strauss’s opening partner, had twice been caught behind off Kemar Roach no-balls when, on 24, he edged paceman Ravi Rampaul to wicket-keeper Denesh Ramdin.

But Strauss and Jonathan Trott took England to 123 for one at tea with a brisk stand of 80.

But neither Trott nor England had added to their score when, on 35, he was lbw to a Rampaul delivery that cut back sharply.

Trott called for a review but the decision was upheld.

Pietersen wasted little time in attacking Shane Shillingford, left out at Lord’s, by going down the pitch to loft the first ball he received from the off-spinner for six over long-on.

England had their moments of good fortune.Pietersen was lucky when, on 25, he saw an inside-edge off Rampaul just miss the stumps before going for four.

But the West Indies were discovering, as England’s bowlers had before them, that there was precious little room for error on this pitch.

Rampaul, who missed the first Test with a neck injury, was the pick of the attack with two for 42 in 18 overs.

Strauss cut the medium-pace of opposing skipper Sammy for a four that took him into the 90s before a boundary off Shillingford through mid-wicket saw him to a 192-ball century with 18 fours.

West Indies resumed Saturday on 304 for six, having collapsed to 63 for four, with Marlon Samuels 107 not out and Sammy a then Test-best 88 not out.

Sammy went to 98 by slicing a drive off Stuart Broad over the slips and next ball had another lucky break when, aiming legside, he somehow got the ball through point for another boundary that took him to a century.

But the 28-year-old, playing his 26th Test, had produced plenty of ‘proper’ shots too in completing a 140 ball-hundred with a six and 16 fours.

However, both he and Samuels were out soon afterwards as Tim Bresnan, expensive on Friday, removed the century-makers in a spell of three wickets for 10 runs in 19 balls that saw him finish with four for 104 in 27 overs.

Sammy holed out on the hook to Pietersen at deep square leg to end a stand of 204 with Samuels that was a West Indies record for the seventh wicket against England, surpassing the 155 shared by Garry Sobers and Bernard Julien at Lord’s in 1973.

Samuels, who’d added just 10 to his overnight score, exited for 117 when he edged Bresnan and James Anderson held a sharp catch in the gully.