Goa and Kerala will take each other on in the Ranji Trophy 2015-16 seventh round match at Porvorim.

Hello and welcome to CricketCountry’s live coverage of Day 1 of the Group C game of the 2015-16 Ranji Trophy between Goa and Kerala, live from Goa Cricket Association Academy Stadium, Porvorim. Goa have a slight edge in this match owing to their points in Group C standings. They have 15 points from six games while Kerala have 12 from five matches. Add to it, Goa haven’t lost a match so far but Kerala have lost one. Goa and Kerala have drawn five and four matches respectively. Goa played well in their previous match against Saurashtra where they declared their second innings on 299 for seven. Talking of Kerala, they too played well in their last match but that game was against minnows Tripura. They got three points from that game as they took a first innings lead in the encounter. Complete coverage of Ranji Trophy 2015-16

Live cricket scores Kerala 224/5 | Overs 90 | Batting: Akshay Kodoth 28(130), Robert 51(122): Finally, the umpire signals end of first day’s play. At stumps on day one, Kerala were 224 for the loss of five wickets. Akshay Kodoth and Robert were at the crease batting on 28 and 51 respectively. Kodoth played very defensively at a strike rate of 21.54. Robert on the other hand reached his fifty only a few minutes before stumps. Robert hit four boundaries in his knock. It will be interesting to see on waht score Kerala ends their first innings on. Tomorrow will bring new excitement to this game since we’ll witness Kerala’s bowler Monish Kareparambil’s bowling. Monish has been very successful in this tournament and has emerged as one of the leading wicket-takers. Do tune into CricketCountry’s live coverage on day 2 as well to see for yourself how Goa’s bowlers fare against Monish. Till then it’s goodbye from us. Cheerio!

Live cricket scores Kerala 220/5 | Overs 88 | Batting: Akshay Kodoth 27(120), Robert 48(120): Kerala are batting very slowly. In the last 90 balls they have scored just 19 runs. Akshay Kodoth who is batting on 27 has faced 120 balls so far with only two fours i.e. at a strike rate of 22.13. Robert who is batting at the other end is just two short of his half century. Fabib Ahmed and Warrier are next in the batting order. Just two more overs left to be bowled for today.

Live cricket scores Kerala 201/5 | Overs 73 | Batting: Akshay Kodoth 24(82), Robert 34(68): Kerala have crossed 200-run mark but have lost half their side. Amit yadav is bowling very well. Sanju Samson was the last wicket to fall, he was not able to reach double digits. Samson was caught by Snehal Kauthankar on the bowling of Amit Yadav. Akshay Kodoth and Robert are at the crease now. Their partnership is now worth 54 runs. Kerala will be aiming to go past 300. OUT! VA Jagadessh b Amit Yadav  61(139), OUT! Sachin Baby b Parsanth Parameswaran 20(41), OUT! Sanju Samson c Snehal Kauthankar b Amit Yadav 1(3)

Live cricket scores Kerala 117/2 | Overs 40.3 | Batting: VA Jagadessh  50(111), Sachin Baby 14(27): The batsmen are playing sensibly, executing scoring shots on only lose deliveries. Sachin Baby has opened his account and is batting on 14 having struck two shots to the fence.  Sachin and Jagadeesh’s partnership is now worth 21 runs. Sanju Samson will come next as per the batting order.

Live cricket scores Kerala 103/2 | Overs 35 | Batting: VA Jagadessh  50(100), Sachin Baby 0(7): VA Jagadeesh completes his half century but Kerala have lost two wickets— Mohammed Azharudeen and Rohan Prem. Prem was bowled by Shadab Jakti. His wicket was important because he has been in very good touch in this tournament. Kerala are now 103 for the loss of two wickets after 35 overs. Kerala needs a good partnership from the set batsman VA Jagadeesh and Sachin Baby who is fresh at the crease. Baby is yet to get off the mark. OUT! Mohammed Azharudeen lbw Prasanth Parameswaran  31(55), OUT! Rohan Prem b Shadab Jakati 20(50)

Live cricket scores Kerala 52/0 | Overs 15 | Batting: VA Jagadessh  26(42), Mohammed Azharudeen  30(49):Kerala, have started their innings pretty well. They are 52 without any loss after 15 overs. Openers— Jagadessh and Azharudeen are batting on 26 and 30 respectively. They are batting at a quick pace too. Kerala will look forward to post a good total in their first innings because Goa have a good batting line up.

Kerala batsman Rohan Prem, who has batted quite well in the tournament, will hold the strings in this match also. Other Kerala players to watch out for in this encounter will be Monish Kareparambil who has been excellent with his bowling and Kerala’s captain and wicketkeeper-batsman Sanju Samson. For Goa, a lot will depend on their batsman Darshan Misal who struck a brilliant hundred in the previous match. Their bowler Prashanth Parameswaran will have to shoulder the maximum responsibility to pick key wickets and give Goa early breakthroughs. 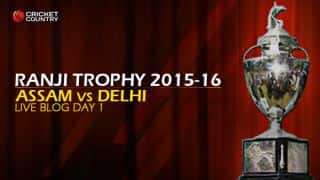