Hello and welcome to CricketCountry’s live blog for Day 3 of the ongoing Ranji Trophy 2015-16 Group C match between Goa and Tripura.

Hello and welcome to CricketCountry’s live blog of the ongoing Ranji Trophy 2015-16 Group C match between Goa and Tripura, at the Goa Cricket Association Academy Ground in Porvorim. Goa, who resumed their batting yesterday morning on 161 for five in their first innings in reply to Tripura’s paltry score of 61 made 257 in their first innings and thus took a first innings lead of  196. Darshan Misal was Goa’s highest scorer with 62 runs. They have now reduced Tripura to 140 for six in the latter’s second innings. Tripura are in danger of an innings defeat. Rana Datta is bowling exceedingly well, he took  four of six Tripura wickets which fell yesterday. READ: Full coverage, Ranji Trophy 2015-16 here

Tripura needs 56 more runs to avert an innings defeat. Let’s see how long their tail will wag. If  Tripura loses this match which most probably they will, it will get very difficult for them to get back in the tournament. As of now they should try to dodge an innings defeat and thus stop Goa getting extra points through this match. Tripura batters should show more resilience tomorrow, see off the first few overs and then start scoring runs on lose deliveries.

Live cricket scores Goa 50/1 | Target 49 | Overs 25.1| Batting: Amogh Desai 20(83), Sagun Kamat 28(61): Goa win this match convincingly by nine wickets. Amogh Desai and Sagun Kamat were unbeaten on 20 & 28 and helped steer Goa to a thumping victory. Goa gets six points and Tripura none. Tripura’s batting is their major concern. They need to bat better in the later matches by working on flaws in their batting esp. on how to face the new ball and their tail needs to show some resistance in the future.

Live cricket scores Goa 12/1 | Target 49 | Overs 14| Batting: Amogh Desai 6(39), Sagun Kamat 4(26): Goa need 37 more runs to win. They have lost their first wicket Swapnil Asnodkar for just two runs. He was caught by Bose of the bowling of AK Sarkar. Goa fans must be very happy with their team’s performance in this match. OUT! Swapnil Asnodkar c UU Bose (sub) b AK Sarkar 2(7)

Live cricket scores Tripura 245 | Target 49 | Overs 75.1| Batting:AA Dey 0(6): Tripura have averted an innings defeat. They are bowled out for 245, if they had scored 100 more runs their bowlers would have got a fighting chance. Goa only need 50 runs to win. Let’s see how many overs their batters will take to get beyond 50 and win this match. If they win without losing any wicket it shall be a morale boost for them going into the next match. OUT! Rana Datta c Kamat b Jakati 29(82), Mura Singh c Misal b Amit Yadav 104(101), TS Saha c Kamat b Jakati 0(3), AK Sarkar c Dheeraj Jadhav b Jakati 2(11) 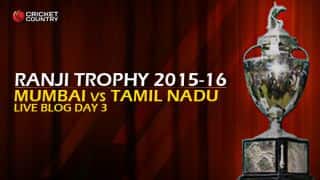