Catch Live Updates of Day Four's action from the Ranji Trophy 2015-16 clash between Madhya Pradesh and Gujarat at Surat.

Welcome to CricketCountry’s live coverage of Day four of the Group B game of the 2015-16 Ranji Trophy between Gujarat and Madhya Pradesh at Lalbhai Contractor Stadium, Surat. Heading into the final day, the match is firmly in the grip of Gujarat. They have set Madhya Pradesh a target of 314, out of which 310 runs remain to be scored on the final day. Given the way match has shaped up so far, it seems an unlikely task. On Day 1, Gujarat won the toss and decided to bat first. They were 252 for the loss of 6 wickets at stumps on that day. Complete coverage of Ranji Trophy 2015-16.

Live Cricket Score: Madhya Pradesh 160 | Overs 49.5 | Target 319 | BATSMEN: Ishwar Pandey 4(9): Gujarat earned anothe rsix points with a superb 153-run victory over Madhya Pradesh in Round 7 of the ongoing Ranji Trophy 2015-16. Cahsing Gujarat’s target of 319, MP were bundled out for 160 in 49.5 overs. The last batsman to get dimissed was Ankit Singh Kushwah. he scored 29 from 41 deliveries before giving a catch to the wicketkeeper Pathiv Patel. OUT! Puneet Datey b R P Singh OUT! Ankit Singh Kushwah c Parthiv Patel b J J Bumrah 29(41)

Live Cricket Score: Madhya Pradesh 92/7 | Overs 32.2 | Target 319 | BATSMEN: Ankit Sharma 32(44): At Lunch, Gujarat are three wickets away from a superb wicket against MP. Rameez Khan was the last batsman to get dismissed and with that wicket, lunch wa staken at Surat. R P Singh has four wickets to his name so far in the final innings and Gujarat will want him to finish off things for them in the post-lunch session. OUT! Harpreet Singh Bhatia c Parthiv Patel b Rush Kalaria 1(15) OUT! Rameez Khan LBW R H Bhatt 14(50)

On Day two, Gujarat’s innings folded for 311. Manpreet Juneja, Axar Patel and Rujul Bhatt scored half-centuries while Rush Kalaria added important 38 runs lower down the order. For Madhya Pradesh, Jalaj Saxena, Puneet Datey and Ankit Kushwaha picked up two wickets each. In reply, Madhya Pradesh kept losing wickets at regular intervals and ended Day two at 7 for 187. Only stumper Naman Ojha made an important contribution with his half-century. Their innings bundled out for 200 on day 3, while Gujarat posted 202 for 9 Dec. in their second innings, setting a target of 314. Gujarat look favourites to win here, while Madhya Pradesh will hope to put up a fight on the last day. 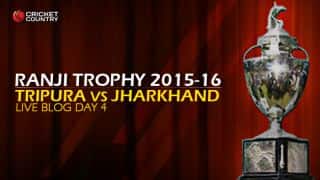