Catch live updates of Day 3 of Haryana vs Assam's Round 6 match here.

Hello and welcome to CricketCountry’s live coverage of Day three of the Group A game of the 2015-16 Ranji Trophy between Haryana and Assam, live from CH Bansi Lal Cricket Stadium, Lahli, Rohtak, Haryana. Haryana, who started day two on 140 for seven  added just 28 more runs and were bowled out for 168 within 11 overs yesterday morning. Krsihan Das took six wickets. Haryana bowlers bowled exceedingly well later on to inflict a batting collapse which resulted in Assam’s innings folding for 120. AH Hooda and HV Patel picked four and three wickets respectively. Thus, Assam had a first innings deficit of 48 runs. Haryana were three down at stumps on day two in their second innings. Assam bowlers— Krishna Das and Arup Das were bowling pretty well. NR Saini and HJ Rana were at the cease. Saini was batting on 11 while Rana was yet to get off the mark. READ: Ranji Trophy 2015-16, full coverage here

LIVE CRICKET SCORE Assam 35/3 | Target 160 | Overs 26 | BATTING: Amit Verma 6(33), Arun Karthick 42(39): After 26 overs, Assam need another 77 runs to defeat Haryana with seven wickets to spare. The three dismissals are shared between Ashish Hooda and Mohit Sharma with the former bagging two of those wickets. The lats batsman to get out was Assam opener Rahul Hazarika. He scored a 42-ball 24 before giving a catch to Rahul Deewan on the first delivery of the 15th over. OUT! Pallav Kumar Das LBW Ashish Hooda 11(30) OUT! Tarjinder Singh c Sachin Rana b Mohit Sharma 0(12) OUT! Rahul Hazarika c Rahul Dewan b Ashish Hooda 24(42)

LIVE CRICKET SCORE Assam 5/0 | Target 160 | Overs 2 | BATTING: Pallav Kumar Das 4(11), Rahul Hazarika 1(1): Haryana was bowled out for 111 in 50.3 overs on Day 3, giving Assam a target of 160 runs to win the Round 6 of the ongoing Ranji Trophy 2015-16. The ten wickets of Haryana were shared between Arup Das and Krishna Das with the former bagging six of those. The ‘Das’ continue to impresive. Himanshu Rana top-scored for the hosts with his fighting 27 runs from 68 deliveries. Meanwhile, their six batsmen were dismissed for a single digit.

LIVE CRICKET SCORE Haryana 55/5, 168 | Assam 120 | Overs 30 overs | BATTING: Himanshu Rana 21(53), Priyank Tehlan 6(14): After bowling out Assam for a mere total of 120 in the second innings, Haryana have struggled too. Once again the ‘Das’ have done a great job for Assam. The five wickets are shared between Arup and Krishna Das with the latter bagging three of those. From here, Haryana lead their opponents by 99 runs, with five wickets to spare. The last batsman to get dimissed was Sachin Rana. Sachin scored a 14-ball 6 before getting caught by Syed Mohammed on the fourth delivery of the 27th over off Krishna’s bolwing. OUT! Sachin Rana c Syed Mohammed b Krishna Das 6(14)

Haryana are leading by 63 runs yesterday. The match is more or less in balance right now and can go either way. There is a high probability that this match will give a result and if possible today itself i.e. on day three. 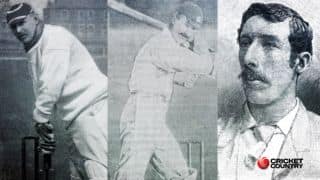 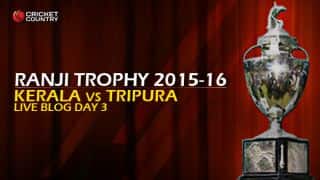