Catch Live updates of the Ranji Trophy 2015-16 match between Haryana and Odisha on Day Two.

Hello and welcome to CricketCountry’s live coverage of the Ranji Trophy 2015-16 Group A match between Haryana and Odisha. We will bring you live updates of the match from Lahli on Day Two of the match. Skipper Natraj Behera and Ranjit Singh struck unbeaten centuries to guide Odisha to 280 for one against Haryana. Deciding to bat after winning the toss, Odisha suffered an early blow as opener Girja Rout (10) got out to Mohit Sharma. After that is was all about the batsmen to put on a special show as Natraj (143*) and Singh (109*) made merry as Haryana bowlers toiled hard. Odisha on stumps at Day 1 were placed at 280 for 1 in 90 ovrs with Natraj and Ranjit still on the pitch. Complete coverage of Ranji Trophy 2015-16

Natraj faced 244 balls and hitting 12 boundaries and four sixes during his unbeaten knock of 143, while Ranjit’s  109 came off 266 deliveries with the help of eight fours and two hits over the fence. The duo shared an unbeaten partnership of 263 for the second wicket and will want to cross the 300-run barrier.This was Ranjit Singh’s second first-class game for Odisha. Offspinner Jayant Yadav was the most expensive, conceding 88 runs off his 21 overs. Haryana dearly missed the services of legspinner Amit Mishra, who wasn’t released to play in this round in spite of not being picked for the second India-South Africa Test in Bangalore.

LIVE CRICKET SCORE Haryana 38/0 in Overs 15: At stumps on Day 2, Haryana have managed to reach 38 without loss in reply to Odisha’s massive score of 6 for 529 Dec. With two days’ play still left in the match, Odisha have all but secured their position. It will take a gargantuan effort from the Haryana batsmen to reach near their score. On the other hand, if Odisha bowlers bowl exceptionally well, they can not only gain points by taking first innings lead, but can also fancy their chances of an outright win.  BATTING: RV Dewan 26 (48), NR Saini 12 (42)

LIVE CRICKET SCORE Haryana 18/0 in Overs 5: In reply to Odisha’s massive 6 for 529, Haryana have started their second innings on a cautious note. They are without the services of their regular skipper Virender Sehwag, who has been in the United States of America for the last few days participating in the All-Stars League. In his absence, the task of surpassing the score or even reaching near it seems uphill. BATTING: RV Dewan 11 (18), NR Saini 7 (12)

LIVE CRICKET SCORE Odisha 529 for 6 Declared in Overs 163: Odisha have finally declared for a massive score of 6 for 529. Nataraj Bahera remained unbeaten on a monumental 255, which also happens to be his highest First-Class score. Haladhar Das was unfortunate to miss out on his hundred when he was cleaned up by Harshal Patel for 93. Odisha have scored a huge total and it seems highly unlikely that Haryana would surpass it. BATTING: Nataraj Behera 255 (453), S Pradhan 2 (3)

LIVE CRICKET SCORE Odisha 494 for 5 in Overs 157: Odisha have piled on close to 500 runs with half the team yet to bat. Bahera has scored half of those runs and is looking very comfortable at the crease. There are no signs of tiredness or any trouble whatsoever as he proceeds towards his 250. Das too has been in a sublime touch. He is batting on 71 at the moment. BATTING: Nataraj Behera 244 (435), Haladhar Das 71 (140)

LIVE CRICKET SCORE Odisha 45o for 5 in Overs 143: Bahera and Das continue to plunder a hapless Haryana side here. The former has reached to his career best score and is looking invincible at the moment. His marathon knock of unbeaten 226 has virtually knocked Haryana out of the game. Das too has been solid during his stay. With his 45 not out, he has added 78 runs so far with Bahera.  BATTING: Nataraj Behera 226 (410), Haladhar Das 45 (83)

LIVE CRICKET SCORE Odisha 397 for 5 in Overs 123: Natraj Bahera reached to a splendid double ton on Day 2 against Haryana. At lunch, the right-handed batsman was unbeaten on a fine 204. There was a phase when he lost partners in quick succession. But he still managed to keep himself focused and  reached to his personal milestone. In the process, he has also taken his team to a commanding position. He has so far hit 18 boundaries and four sixes. It has been a sorry tale for the Haryana players so far, with only the promising cricketer Jayant Yadav showing some skills. BATTING: Nataraj Behera 204 (352), Haladhar Das 15 (18)

LIVE CRICKET SCORE Odisha 336 for 2 in Overs 106: Natraj Bahera is firmly heading towards his double ton and riding on his brilliance, Odisha have reached to a commanding position in the match. Though they lost the other centurion Ranjit Singh, who scored 112 before becoming Harshal Patel’s victim, during this phase of play, they’ve ensured the momentum doesn’t get affected. Govinda Poddar is giving good company to Bahera. BATTING: Nataraj Behera 180 (296), Govinda Poddar 16 (39)

LIVE CRICKET SCORE Odisha 299 for 1 in Overs 94: Nataraj Behera and Ranjit Singh are continuing to pile on misery on the Haryana side, as both of them have resumed in the same passion they left at stumps on Day One. Behera is batting on , whereas Ranjit is on not out. BATTING: Nataraj Behera 159 (265), Ranjit Singh 112 (287) 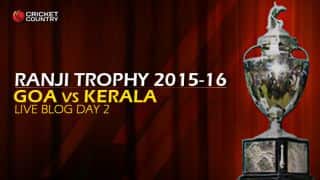 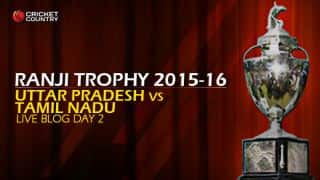