Odisha are currently at the pole position after their massive first innings score of 529/6.

Hello and welcome to CricketCountry’s live blog of the third day of the ongoing Ranji Trophy 2015-16 Group A match between Haryana and Odisha at Lahli, near Rohtak on Tuesday. Odisha skipper Natraj Behera struck a magnificient unbeaten 255 to guide Odisha to a mammoth 529 for six declared in their first innings against Haryana on the second day of their Group A Ranji Trophy cricket match. Behera, who resumed at his overnight score of 143, faced 453 balls and struck 19 boundaries and four sixes during his marathon knock. But another overnight centurion Ranjit Singh (112) could added just three runs before being dismissed by Harshal Patel. But Behera and Halhadar Das (93) shared 157 runs for the sixth to take Odisha forward. UPDATES: Haryana vs Odisha, Ranji Trophy 2015-16, Group A match, Day 2 at Lahli. Complete coverage of Ranji Trophy 2015-16

Das scored his runs off 155 balls with the help of nine boundaries and three hits over the fence. Resuming at 280 for one, Odisha piled up 249 more runs before declraing their innings after facing 163 overs. Patel (2/94) Jayant Yadav (2/164) picked up two wickets each for Haryana. In reply, Haryana finished the day on 38 for no loss in 15 overs. Rahul Dewan was batting on 26, while giving him company was Nitin Saini on 12.

Playing for Odisha against Haryana at Chaudhury Bansi Lal Cricket Stadium, Lahli, Natraj Behera, with his 255 not out, made his way into record books. Though SS Das’ 300 not out against Jammu & Kashmir at Cuttack, 2006-07 remains the highest score in the history of Odisha, Behera has registered the highest score by an Odisha batsman away from home and the second-highest score in their history.

Live Cricket Score: Haryana 46/1 | Odisha 529/6 Dec | Overs 17 | BATSMEN: NR Saini 25 (48), CK Bishnoi 11 (36) | Haryana end the Day 3 at 46 for 1. They are still trailing by a huge margin of 267 runs. The threat of an outright defeat is looming large at the moment. Odisha bowlers have done well in the match so far. If their first innings performance is anything to go by, they are favourites to win this one on the final day. Stay tuned tomorrow, as we will figure out whether Haryana batsmen show enough resistance and take this match towards a draw or Odisha bowlers force a straight win.

Live Cricket Score: Haryana 32/1 | Odisha 529/6 Dec | Overs 12 | BATSMEN: NR Saini 20 (34), CK Bishnoi 2 (20) | Haryana are following on after getting out for 216 with a huge deficit of 313 runs. They have already lost their opener RV Dewan for 5. Suryakant Pradhan was the successful bowler when he got rid of Dewan. Saini, who got a fighting fifty in the first innings, is at the crease along with CK Bishnoi. With one full day to go, Odisha would fancy their chances of an outright win.

Live Cricket Score: Haryana 216 | Odisha 529/6 Dec | Overs 85.5 | BATSMEN: M Sharma 5 (13) | Haryana have been bowled out for 216 here. They have a huge deficit of 313 runs and in all probability will come out to bat again. The three wickets that fell in this session were of Yuzvendra Chahal, Jayant Yadav and AA Hooda. For Odisha, it was a collective bowling effort, with Basant Mohanty and Suryakant Pradhan leading the way.

Live Cricket Score: Haryana 203 for 7 | Odisha 529/6 Dec | Overs 79 | BATSMEN: JJ Yadav 39 (88), Y Chahal 1 (31) | Haryana have reached to 203 for 7 at tea. The last wicket to fall was of bowler Harshal Patel’s, who was trapped in front of the wickets by Deepak Bahera, All-rounder Jayant Yadav has reached to 39 and is playing along with Yuzvendra Chahal at the moment. Chahal is a decent bat and can chip in with few runs.

Live Cricket Score: Haryana 171 for 6 | Odisha 529/6 Dec | Overs 63 | BATSMEN: JJ Yadav 14 (38), HV Patel 8 (18) | Basant Mohanty has returned to remove Tehlan, who has fallen for 21. Haryana have gone further downhill at 171 for 6. Odisha are in for a big lead here, as they get access to Haryana’s tail now. All-rounder Jayant Yadav has been joined by bowler Harshal Patel. Haryana would look to stretch their innings as far as they can, while Odisha would look to clean things up quickly.

Live Cricket Score: Haryana 152 for 5 | Odisha 529/6 Dec | Overs 55 | BATSMEN: PY Tehlan 14 (18), JJ Yadav 4 (9) | Haryana have lost opener NR Saini immediately after he got to his fifty. He has been cleaned up by Suryakant Pradhan for 51 and has been replaced by all-rounder Jayant Yadav. The other man PY Tehlan looks in a bit of hurry, as he is playing his shots instead of showing some patience and holding the fort.

Live Cricket Score: Haryana 134 for 4 | Odisha 529/6 Dec | Overs 49 | BATSMEN: NR Saini 51 (137), PY Tehlan 11 (13) | Haryana’s batting woes continue as they find themselves at 4 for 134 at lunch on Day 3. They are clearly missing the services of their captain and charismatic player Virender Sehwag, who showed the world how destructive can he be at the highest level even after retiring during the recently concluded All-Stars Twenty20 league. Opener NR Saini’s unbeaten half-century has been the lone bright spot for them.

Live Cricket Score: Haryana 120 for 4 | Odisha 529/6 Dec | Overs 45 | BATSMEN: NR Saini 49 (126), PY Tehlan 0 (6) | Haryana innings has gone further downhill with Sachin Rana’s dismissal. Rana scored 24 and added 50 runs for the fourth wicket with Saini before Basant Mohanty trapped him right in front of the wicket. Saini is inching towards his personal milestone as he is unbeaten on 49. PY Tehlan is the new man in.

Live Cricket Score: Haryana 95 for 3 | Odisha 529/6 Dec | Overs 34 | BATSMEN: NR Saini 35 (95), SR Rana 14 (31) | In the last 10 overs, Haryana have got some momentum going their way as they have not lost any wicket. Their opener NR Saini is holding up one end and playing the sheet-anchor. Giving him good company is allrounder Sachin Rana. The first task they have in front of them is to build a solid partnership here and then look to avoid the follow-on.

Live Cricket Score: Haryana 72 for 3 | Odisha 529/6 Dec | Overs 25 | BATSMEN: NR Saini 26 (73), SR Rana 0 (2) | In reply to Odisha’s mammoth total, Haryana top-order has fumbled. Starting the Day 3 with 1 for 38, they have lost a couple of more wickets in the first hour of play. K Bishnoi and RP Sharma have been dismissed by Suryakant Pradhan and Basant Mohanty respectively this morning. Some good news for them is that they have their opener NR Saini still at the crease. 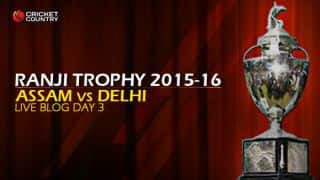 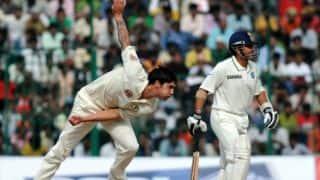