Welcome to CricketCountry’s live blog of the fourth and final day of the ongoing Ranji Trophy 2015-16 Group A match between Haryana and Odisha at Lahli.

Hello and welcome to CricketCountry’s live blog of the fourth and final day of the ongoing Ranji Trophy 2015-16 Group A match between Haryana and Odisha at Lahli, near Rohtak on Wednesday. Currently going by the scenario of the table, both the teams are at the bottom half. While Odisha are at the no. sevn spot of the table with with nine points from five games including a win and a loss, followed by three draws; Assam on the other hand are at no.8 with five points from five games, including a couple of losses and three draws. Who would come out top in this tie?

Odisha opened up the possibility of a bonus-point win after forcing Haryana to follow-on and take a big first-innings lead in their Group A Ranji Trophy cricket match on Tuesday. In reply to Odisha’s mammoth first-innings total of 529 for six declared, Haryana were bowled out for 216 at the Bansi Lal Cricket Stadium. Forced to follow-on, the hosts were 46 for one in their second innings when the stumps were drawn on the third and penultimate day’s play. Nitin Saini (25) and Chaitanya Bishnoi (11) were at the crease at the crease at close of play, reports PTI.

In their first innings, Saini top-scored for the hosts with 51 off 146 balls. Opener Saini was the only batsman who have managed to compile a half century. Jayant Yadav was the second best scorer with 46 off 100 balls. The others, such as Rishi Dewan, Sachin Rana and Priyank Tehlan, got starts but could not carry on, added PTI.

Live Cricket Score: Haryana 216 & 250/4 | Overs 103 | Odisha 529/6 Dec | BATSMEN: CK Bishnoi 86 (259), PY Tehlan 11 (32) | Haryana have scored just 15 runs in the last 10 overs and sensing that the match was not going anywhere, it has been called off. With 86 overs bowled in the day and six Haryana wickets still intact, there was no hope of an outcome here. Bishnoi remained unbeaten on 86 while Tehlan on 11. With this result, Odisha have earned 3 points while Haryana have managed to get 1 point for their second inning performance.

Though a tad disappointed for not winning this one, Odisha would be the happier team with lot to cheer about. They posted a huge total on board, thanks to Natraj Bahera’s career-best 255 not out. They then returned to shot out Haryana for 216 runs and giving them a follow-on. At this juncture, they must have hoped for an outright win. But Haryana showed a lot of character in playing out the remaining time. The effort was particularly commendable as they were without their skipper Virender Sehwag. That’s all from here, Ciao!

Live Cricket Score: Haryana 216 & 235/4 | Overs 93 | Odisha 529/6 Dec | BATSMEN: CK Bishnoi 79 (224), PY Tehlan 7 (7) | Haryana have lost their fourth wicket in the form of Sachin Rana, who was looking good till a Suryakant Pradhan delivery dismissed him. Rana added 44 runs with Bishnoi and helped his team move closer towards avoiding an outright innings defeat. Bishnoi is still holding the fort for his team with a splendid unbeaten 79, that has seen him send the ball past the boundary line 9 times.

Live Cricket Score: Haryana 216 & 192/3 | Overs 79 | Odisha 529/6 Dec | BATSMEN: CK Bishnoi 57 (183), SR Rana 14 (26) | Are we witnessing some action here? Haryana have lost RP Sharma and finally a breakthrough has come. Dhiraj Singh finally got him caught by a substitute fielder. Sharma scored a patient 42 off 112 balls. Bishnoi is still going strong and has got Sachin Rana for company now. Can Odisha produce a twist in the tale?

Live Cricket Score: Haryana 216 & 174/2 | Overs 70 | Odisha 529/6 Dec | BATSMEN: CK Bishnoi 55 (167), RP Sharma 40 (100) | Haryana batsmen Chaitanya Bishnoi and RP Sharma are going strong at the moment. The two have added 73 runs so far for the third wicket. They have got their team to a relatively safer position and if the two can continue for a little longer, Haryana can avoid a direct defeat here. Odisha will be disappointed if they do not win this one. All their hard work will be undone.

Live Cricket Score: Haryana 216 & 152/2 | Overs 62 | Odisha 529/6 Dec | BATSMEN: CK Bishnoi 50 (151), RP Sharma 26 (67) | Haryana have started the post-lunch session afresh and have managed to keep their wickets intact. They still trail by 161 runs. The are inching gradually towards getting rid of the lead, which is still some distance away. Odisha bowlers are toiling hard for wickets here so that they can force an outright win, but wickets do not seem to come at the moment.

Live Cricket Score: Haryana 216 & 128/2 | Overs 55 | Odisha 529/6 Dec | BATSMEN: CK Bishnoi 35 (124), RP Sharma 7 (28)  | At lunch, Haryana are 128 for 2 and trail Odisha by 185 runs. They are missing the services of their skipper Virender Sehwag here, who was recently in the United States of America (USA) for the All-Stars Twenty20 league. In his absence, no batsman has shown any grit or determination to stay at the wicket. Their dismal show with the bat have put them in this position from where they can lose this match on the final day today.

Live Cricket Score: Haryana 216 & 117/2 | Overs 51 | Odisha 529/6 Dec | BATSMEN: CK Bishnoi 35 (124), RP Sharma 7 (28) | Haryana have lost their opener Saini for 64. Bishnoi and RP Sharma continue with their bid to save the match. They are still 196 runs behind Odisha and face a gargantuan task of saving the match. Odisha bowlers would look to strike early post-lunch to force out any outcome in the match.

Live Cricket Score: Haryana 216 & 89/1 | Overs 36 | Odisha 529/6 Dec | BATSMEN: NR Saini 57 (114), CK Bishnoi 21 (83) | Haryana continue to do the good work. They are now 89 for 1 in their bid to push the game towards a draw. Odisha on the other hand are striving for wickets. They would be banking heavily on Basant Mohanty and Suryakant Pradhan to deliver the goods. Only quick wickets can get them into contention for winning this game.

Live Cricket Score: Haryana 216 & 75/1 | Overs 28 | Odisha 529/6 Dec | BATSMEN: NR Saini 47 (83), CK Bishnoi 17 (68) | Following-on in the match, Haryana have started Day 4 on a positive note. Their openers NR Saini and CK Bishnoi are unbeaten at the moment and Saini is inching towards his 50. Odisha bowlers will have to pull up their socks and deliver regular strikes if they have to win this one from here. There is nothing much left for Haryana in this match. 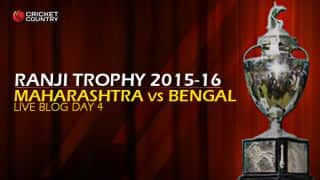