Welcome to CricketCountry’s live blog of Day 2 of the ongoing Ranji Trophy 2015-16 Group A match between Haryana and Rajasthan in Lahli.

Hello and welcome to CricketCountry’s live blog of Day 2 of the ongoing Ranji Trophy 2015-16 Group A match between Haryana and Rajasthan at the Chaudhry Bansi Lal Cricket Stadium in Lahli. Both Haryana and Rajasthan sit at the bottom of the league table at number eight and nine, respectively as they both are in search for their first victory of the season. Haryana were off to an unplesant start in the opening day, getting bundled for mere 112 in the first innings, while Rajsthan were 75 for the loss of a wicket as they trailed Haryana by just 37 runs. Both the teams are in desperate search if a win in the game, but who would perform well? Complete coverage of Ranji Trophy 2015-16

Live cricket scores Haryana 112 & 62/0 | Rajasthan 279 |  Overs 19 | Batting: NR Saini 42(60), CK Bishnoi 20(54): Haryana have started batting in their second innings. The first task before them is to clear off the first innings deficit. At stumps on day two, Haryana were 62 for no loss. NR Saini and CK Bishnoi were at the crease batting on 42 and 20 respectively and Haryana were trailing by 105 runs. Saini had struck five boundaries in his innings.

Live cricket scores Rajasthan 279 | Haryana 112 | Overs 88.3 | Batting: Pankaj Singh 0(3): Rajasthan are bowled out for 279. They lost their last four wickets for just 30 runs. Mohit Sharma took a five-wicket-haul. Haryana will start their second innings on a 167-run deficit. It will be an uphill task for Haryana batsmen to get rid of this trail before they can think of posting a target to Rajasthan to chase in the final innings of the match.  OUT! Dishant Yagnik c RP Sharma b HV Patel 27(69), OUT! Deepak Chahar c NR Saini b Mohit Sharma 30(53), OUT! TM Ul Haq c RP Sharma b Mohit Sharma 17(26), OUT! AB Singh c NR Saini b HV Patel 0(2)

Live cricket scores Rajasthan 224/6 | Haryana 112 | Overs 72.2 | Batting: Dishant Yagnik 10(27) , Deepak Chahar 14(29): Rajasthan lose their two set batsmen— Ashok Menaria and Siddharth Dobal. Both did the hard work to get their eye in but just when they needed to change gear, they lost track and got out. Both of them were unfortunate to miss out on their respective fifties. Both the wickets were claimed by Mohit Sharma, he takes his wickets tally to three. Dishant Yagnik and Deepak Chahar are batting at the moment on 10 and 14 runs respectively.  OUT! Ashok Menaria lbw Mohit Sharma 47(79), OUT! Siddharth Dobal c NR Saini b Mohit Sharma 43(72)

Live cricket scores Rajasthan 192/4 | Haryana 112 | Overs 60 | Batting: Ashok Menaria 44(72), Siddharth Dobal 38(60) : Rajasthan lose two back to back wickets— Puneet Yadav and Rajat Bhatia. Puneet was trapped by AH Hooda for 46 and the next batsman Rajat Bhatia was cleaned up for a duck. At present Ashok Menaria and Siddharth Dobal are at the crease, both close to their respective half centuries. Rajasthan now lead by 80 runs. OUT! Puneet Yadav lbw AH Hooda 46(72), OUT! Rajat Bhatia b AH Hooda 0(2)

Live cricket scores Rajasthan 126/2 | Haryana 112 | Overs 40 | Batting: Puneet Yadav 46(71), Ashok Menaria 16(15) : Rajasthan have lost one wicket since morning and have added 51 runs to their overnight score of 75. Vineet Saxena was caught by NR Saini on the bowling of Mohit Sharma. Vineet made 39 runs with the help of three boundaries and a six. Puneet Yadav is just four short of his fifty. He has struck seven shots to the fence so far. He is batting along with Ashok Menaria. Rajasthan are now leading by 14 runs. OUT! Vineet Saxena c NR Saini b Mohit Sharma 39(96)

Skipper Pankaj Singh had an eventful outing on Day of the play as he successfully claimed 4 for 10 in only 14.2 overs while Haryana were bowled out for mere 112 in. The former India pacer was at his sparkling best as he destroyed most of the Haryana batsme, with Virender Sehwag, being the only guy to score over 25, whiule Mohit Hooda and Mohit sharma were the other two guys who were able to score above 20s. In reply, Rajasthan were batting comfortable at 75 for the loss of a wicket, trailing by just 37 runs as they didin’t seemed to be bothered by their batting or Haryana’s bowling. Ooener Vineet Saxena and Puneet Yadav were batting on 38 and 12, respectively. 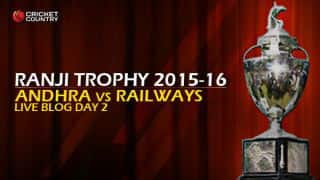