Catch Live Updates of Day Two of action of the Ranji Trophy 2015-16 clash between Himachal Pradesh and Tripura at Dharamsala.

Hello and welcome to CricketCountry’s live coverage of Day 2 of the Group C game of the 2015-16 Ranji Trophy between Himachal Pradesh and Tripura, live from Dharamsala. Himachal are by far the superior team in this match. They have 13 points from three matches. They won one and drew two matches. On the other hand, Tripura is hanging at the last spot in Group C in the points table. They have just one point from three matches. They have lost two matches and drew one. Their performance has been miserable in this series. It’s not that they lost two matches but the manner in which they lost, never able to fight their way back. Complete coverage of Ranji Trophy 2015-16

Live cricket scores Himachal 259/3 | Tripura 285 | Overs 70 | Batting: PK Dogra 21(46), Robin Bist 14(40): Himachal need 36 more runs to level Tripura’s first innings score of 285. Himachal certainly have an upper-hand in this match now. It has been a high scoring encounter so far. The only three wickets of Himachal which fell today were picked by Rana Datta. Rana did not receive support from other Tripura bowlers which led Himachal to get into a much better position in this game. RR Dhawan is next to come if any wicket falls.

Live cricket scores Himachal 247/3 | Tripura 285 | Overs 64.2 | Batting: PK Dogra 17(30), Robin Bist 7(23): Both Himachal openers are back in the pavilion after scoring their respective centuries. Ankush Bains slammed his hundred with the help of 11 boundaries and a six. PS Chopra also scored a well paced century and perished just after reaching the landmark. He struck 14 shots towards the fence and one six in his knock.  Himachal are batting pretty well at the moment. They have lost just three wickets and are already endangering to cross Tripura’s first innings score of 285. Two new batters— PK Dogra and Robin Bist are at the crease right now. OUT! Ankush Bains b Rana Datta 114(153), OUT! Prashant Chopra lbw Rana Datta 101(166), OUT! VA Sharma lbw Rana Datta 5(16)

Live cricket scores Himachal 58/0 | Tripura 285 | Overs 14 | Batting: Ankush Bains 28(36), Prashant Chopra 28(49): Himachal have started batting in their first innings and their approach to score runs on lose to average deliveries is praiseworthy and they haven’t lost any wicket in this risky endeavour too. They are batting at a run rate of 4.14. Ankush Bains and Prashant Chopra are batting well, all set to get to their respective fifties. Himachal are trailing by 227 runs as of now.

Live cricket scores Tripura 285 | Overs 107.4 | Batting: AK Sarkar 32(48): Udiyan Bose is unfortunate to get run out just five short of his century. He wasn’t able to add a single run today to his overnight score of 95 yesterday. Rana Datta and TR Mandal were next to depart, they made 24 and four respectively. With this Tripura’s first innings folded for 285. Himachal bowler AN Chauhan took three wickets in the match. Udiyan was the top-scorer for Tripura. AK Sarkar ran out of partners and remained unbeaten on 32. Udiyan Bose run out PK Dogra 95(244), OUT! Rana Datta c AK Bains b BB Sharma 24(46), OUT! TR Mandal b AN Chauhan 4(8)

Tripura have fought well in this match so far and have certainly punched above their weight. At stumps on Day 1, the team from the northeast were placed at 7 for 223. Youngster Udiyan Bose has held the fort with his 95 not out. The only other notable contribution came from Manisankar Murasingh, who scored 44.

For Himachal, all the bowlers including Rishi Dhawan and Bipul Sharma chipped-in with important contributions. Himachal Pradesh would look to restrict Tripura under 250 on Day 2 and then post a huge total. 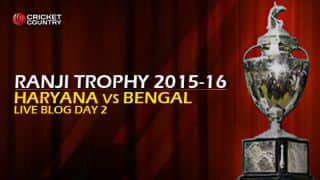 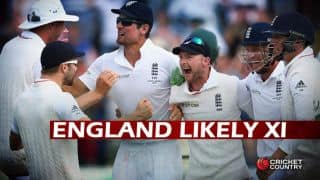