Hello and welcome to CricketCountry’s live coverage of Day 1 of the two-day match between Hong Kong and Nepal at Abu Dhabi. Hong Kong won the toss and elected to bat. Nepal’s regular skipper Paras Khadka was not included in the team. The 27-year-old Mahesh Chhetri is the stand-in-skipper. The two sides earlier in the year played a two-day charity tournament, named Sixes for Nepal. The event was organised by Hong Kong Cricket Association (HKCA) and six teams competed in a six-a-side format at the Kowloon Cricket Club. Money raised from the event was given to UNICEF’s Nepal Appeal and Operation Breakthrough – a local charity that works to prevent crime and juvenile delinquency among the children from the disadvantaged environments. READ: Hong Kong cricket to host ‘Sixes For Nepal’ charity tournament

It is stumps for day 1 and Nepal played their 36 overs scoring 106 with the loss of 1 wicket. Anil Mandal scored a responsible half century and gave the innings the initial boost of runs that it needed. Sagar Pan is also looking promising. Now it will be interesting to see if the

27 overs gone and most of the overs are low scoring. A few boundaries till now but no wicket for Hong Kong as the first wicket came 22 overs ago. Mandal is very close to his half century and once he gets it, he needs to open up and bat. Both the teams need to attack to get possession.

After 20 overs, Nepal batsmen Mandal and Pun look settled. Mandal is not very far from his half century, but they need to look out for singles which they are still not getting. Hong Kong need a wicket urgently.

Nepal reach 50 runs with the help of Sagar Pan’s boundaries. Meanwhile Hong Kong picked up a maiden over. The match is still up for grab for both the teams as anything can happen at this stage. While Hong Kong is seeking a wicket, Nepal needs a stable partnership.

Nepal have lost thier opener Mahesh Chhetri but runs hasn’t stopped. Three boundaries since the last wicket , two of them from Sagar Pan, the new man in. Taking singles seems a bit difficult as runs are coming only fro boundaries.

Nepal have started their innings with Chhetri and Mandal. Both the batsmen look keen to take singles as that keeps the scorecard moving. Two boundaries have come so far, both from Mandal’s bat. Chhetri is taking time to settle down.

Nepal got what they wanted badly in two back to back wickets. Karan KC got a set Nizakat Khan while Basant Regmi got rid of Jamie Atkinson. But Hong Kong still have good runs on board. Nizakat closely missed on his half century while Babar Hayat completed his, progressing to 68. Hayat has been the highest run getter for his side.

The scenario is almost the same as Nepal is yet to get their game changing breakthrough. Nizakat is inching towards his half century as well as Babar Hayat. If both manage to stay for 10 overs more, things will surely turn towards Hong Kong’s way. Nepal need to break the partnership and not only stop them from scoring singles.

Both the teams are pushing themselves to play their best cricket. While Hong Kong’s Nizakat Khan is looking for the right balls to hit big, Babar Hayat is rotating the strike and giving him the chances. Nepal has done great by far by stopping the singles as runs are only coming in from boundaries.

Singles are getting hard and hard to get but boundaries are coming in regular intervals. Nizakat Khan has not spend much time in the crease but he has already hit two fours and a big six. His way of batting clearly shows he wants to score some quick runs. Nepal’s tactics of restricting the singles are commendable.

After a commendable knock of 42 runs, Anshuman Rath retired. Hong Kong still have ample wickets in hand and are expected to put up a good total. Nepal need wicket on the other hand to change the course of the game. The momentum of the match is still with Hong Kong. The new batsman in needs time to settle down.

Anshuman Rath and Kinchit Shah batted diligently, bringing up the fifty in the 21st over. Meanwhile, Basant Regmi, who had been bowling well, drew blood, having Shah caught by Gyanendra Malla. Nepal will be relieved to taken that wicket as Babar Hayat walks out and sees things off, and that is LUNCH at Abu Dhabi. Hong Kong has dominated the session, but it cannot be denied that Nepal have done a wonderful job in restricting them, not letting them get away. The run rate reads 2.51, which is something Hong Kong will want to improve on.

It has been Hong Kong’s morning so far after Tanwir Afzal won the toss and elected to bat at Abu Dhabi. Karan KC and Mahaboob Alam kept things tight in the morning, and Bikram Sob and Irshad Ahmed have kept up with the good job. However, Anshuman Rath and Kinchit Shah have made sure that no wicket has fallen till now. Remember, this is the same Mahaboob Shah who once took ten wickets in an innings and made his way to the Guinness Book of World Records. 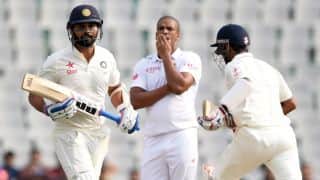