Welcome to CricketCountry's live coverage of Match 7 of the 2016 ICC U-19 World Cup between England U-19 and West Indies U-19 at Chittagong.

England U19 won by 61 runs
Man of the Match: Daniel Lawrence

Good Morning! Hello and Welcome to CricketCountry’s live coverage of Match 7 of the  ICC U-19 Cricket World Cup 2016 between European giants England U-19 and West Indies U-19 at the Zahur Ahmed Chowdhury Stadium in Chittagong on Friday. England, who won the tournament back in 1998, have failed to perform in the tournament ever since and have been mostly inconsistent, despite having an immense talented side. Being the parent nation of the game, they would again look forward to win it this time and make it two for them. While the West Indies, who are yet to win this tournament yet look a settled young side with immense talent and would be no surprise if they are able to win this tournament out, as they have had a good record in the sub-continent. LIVE CRICKET SCORECARD: England U19 vs West Indies U19, Match 7 , ICC Under-19 World Cup 2016 at Chittagong

Live cricket score: West Indies Under-19 221 | Overs 43.4| TARGET: 283| BATTING: Alzarri Joseph 4 (3): England have won two matches in a row in this tournament now. West Indies never looked like wining the match right from the first over and England have finished this in a very professional manner. West Indies have been bowled out with 40 balls to spare. Dan Lawrence is declared man of the match for his outstanding all-round effort.

Live cricket score: West Indies Under-19 219/8 | Overs 43| TARGET: 283| BATTING: Keemo Paul 27 (29), Alzarri Joseph 3 (2): West Indies are slumping to a defeat as they need to score at over nine an over, with just two wickets in hand. England should win it easily, but it has been a good fightback from West Indies.

Live cricket score: West Indies Under-19 66/2 | Overs 15| TARGET: 283| BATTING: Keacy Carty 17 (36), Gidron Pope 47 (48): West Indies are building a strong partnership here and England will need a couple of wickets here to peck their way back into the game. With wickets in hand, West Indies can still chase this score down. This has been a good fightback by the West Indies after they lost two wickets in the first over of their innings.

Live cricket score: West Indies Under-19 27/2 | Overs 7| TARGET: 283| BATTING: Keacy Carty 7 (18), Gidron Pope 19 (20): West Indies have recovered a bit after after losing a couple of wickets in the first over of the innings. The batsmen are slowly settling in, but England still have the edge and will hope to break this partnership before it blossoms.

Live cricket score: West Indies Under-19 2/2 | Overs 1| TARGET: 283| BATTING: Keacy Carty 1 (1), Gidron Pope 0 (1): England have made an excellent start as they have sent two West Indies players back to the pavilion in the first four deliveries. This is not the start West Indies would have wanted at the beginning of the chase. Sam Curran with both wickets.  OUT! Tevin Imlach c Davies b Curran 0 (2), Shimron Hetmeyer LBW b Curran 0 (2)

Live cricket score: England Under-19 243/4 | Overs 45| BATTING:George Barlett 42 (55), Sam Curran 22 (23): England have upped the ante and will look to get a score close to 300 and out pressure on the West Indies batsmen. Curran and Barlett have settled in win and will look to cut lose with just five overs to go.

Live cricket score: England Under-19 142/2 | Overs 26| BATTING: Jack Burnham 43 (53), Callum Taylor 29 (33): West Indies bowlers have pulled things back a bit. They are bowling tight lines and restricting the English batsmen. They runs have dried down a bit and West Indies will hope to cash in by picking up a wicket or two in this period.

Live cricket score: England Under-19 61/1 | Overs 12| BATTING: Dan Lawrence 41 (49), Jack Burnham 6 (9): Max Holden’s pain-striking innings finally comes to an end. Lawrence looks in fine touch and is joined by Jack Burnham at the crease. England have been playing with no great difficulty at the moment. OUT! Max Holden c Springer b Joseph 4 (16)

Live cricket score: England Under-19 31/0 | Overs 7| BATTING: Dan Lawrence 21 (28), Max Holden 4 (15): England are on their way in this crucial match against the West Indies. Lawrence looks in good touch again. He played a record-breaking innings in the first match against Fiji and will look to carry on his form in this match as well. England, nevertheless, have begun well.

TOSS: England have won the toss and elected to bat first

Being their respective opening contest, both the teams would love to get off to a winning start and aim to top the group table. England, who are also placed alongside Fiji and Zimbabwe, are coached by Andy Hurry are led by Brad Taylor and have a star-studded side with the likes of Daniel Lawrence, Jack Burnham, Mason Crane, Sam Curran, Ryan Davies, Aneurin Donald, Saqib Mahmood, Callum Taylor, and many more. While the West Indies are coached by Graeme West and is led by Shimron Hetmyer, while they have great talented players like Keacy Carty, Michael Frew, Alzarri Joseph, Keemo Paul, Odean Smith, Shamar Springer and many more, who could undoubtedly be their star players. 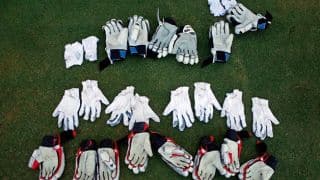 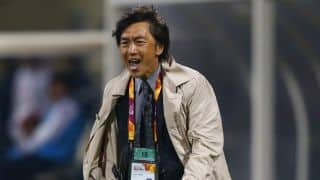