England will go into the match as clear favourites but a surprise from Zimbabwe can't be ruled out.

Good Morning! Hello and Welcome to CricketCountry’s live coverage of Match 15 of the 2016 ICC U-19 Cricket World Cup between Zimbabwe U-19 and England U-19 at the MA Aziz Stadium in Chittagong on Sunday. Zimbabwe has been one of the most volatile sides in world cricket. They are known to create major upsets and are high on confidence after winning the first encounter against minnow Fiji. England on the other hand have been one of the most formidable sides in world cricket and would look forward to take on the minnows in their second encounter. They too recorded a fine victory against West Indies in their first clash. However, both the teams will be looking forward to get their attention on this game and win it in order to remain at the top of the table. LIVE CRICKET SCORECARD: Zimbabwe vs England, ICC Under-19 Cricket World 2016

LIVE CRICKET SCORE: Zimbabwe 159 in 43.4 overs; BATTING: Brandon Mavuta 3(19): Jeremy Ives has been terrific in the last 10 overs or so, having completed his half-century before racing onto the 80s in no time at all, even hammering three boundaries in a single over by Dan Lawrence. Ives loses the support of Mavuta and Matigimu during his run towards his milestone. He will hope for Magarira to preserve his wicket till he reaches his hundred. OUT! Ives is the last man dismissed, and will not be getting to his century as he gets bowled off the bowling of Mahmood, who takes his fourth wicket as a result. OUT! Brandon Mavuta c Aneurin Donald b Saqib Mahmood 14(23), Kundai Matigimu b Mason Crane 3(6), Jeremy Ives b Saqib Mahmood 91(132)

LIVE CRICKET SCORE: Zimbabwe 95/7 in 30 overs; BATTING: Jeremy Ives 47(88), Brandon Mavuta 5(9): Snyder departs for 11 off 26 deliveries, bringing an end to the 35-run partnership for the fourth wicket, one that looked set to pull Zimbabwe out of their early troubles. Callum Taylor pretty much puts Zimbabwe out of the competition with a couple of wickets in a space of a couple of deliveries in the 24th over, sending Mashinge and Keefe back to the pavilion for low scores. Keefe departs for a golden duck, with Taylor on a hat-trick before bowling a wide. Madhevere does not last for long either, getting dismissed for a six-ball 1. Zimbabwe will hope for their tail to guide their side to a somewhat respectable total from here onwards. Meanwhile, Ives is nearing his half-century, and will look to reach the milestone, though it will ultimately go in vain for the team’s cause.  OUT! Shaun Snyder c Brad Taylor b Ben Green 11(26), William Mashinge c Brad Taylor b Callum Taylor 10(20), Adam Keefe c Dan Lawrence b Callum Taylor, Wesley Madhevere b Callum Taylor 1(6)

LIVE CRICKET SCORE: Zimbabwe 70/6 in 24 overs; BATTING: Jeremy Ives 32 (66), Wesley Madhevere 0 (1): Zimbabwe have lost a couple of further wickets and it looks highly unlikely that they will get anywhere close to the target. This is excellent stuff from England. OUT! William Mashinge 0 (1): c B Taylor b C Taylor 10 (20), Adam Keefe c Lawrence b C Taylor 0 (1)

LIVE CRICKET SCORE: Zimbabwe 50/4 in 17 overs; BATTING: Jeremy Ives 15(22),William Mashinge 0 (1): Zimbabwe are further in trouble having lost yet another wicket. They seem in no condition to chase this total down at the moment Enhland are well on top and will look to wrap up the innings as early as possible. OUT! Shaun Snyder c Taylor b Green 11 (26)

LIVE CRICKET SCORE: Zimbabwe 32/3 in 10 overs; BATTING: Jeremy Ives 15(22), Shaun Snyder 5(10): Saqib Mahmood and Sam Curran open the bowling for England, with Akshay Patel and Brendan Sly coming out to bat for the Zimbabweans. OUT! Debutant Patel loses his wicket after a slow start, getting caught at mid-off by the opposition skipper Taylor off Curran’s bowling. OUT! Fellow opener Sly hardly lasts any longer than Patel, getting an outside edge behind the stumps to depart for 3. Zimbabwe head to lunch at 14/2 after five overs. OUT! Murray is dismissed barely an over after lunch. Short delivery outside off, Murray attempts to pull it and gets caught at midwicket! OUT! Akshay Patel c Brad taylor b Sam Curran 2(13), Brendan Sly c Ryan Davies b Saqib Mahmood 3(12), Ryan Murray c Aneurin Donald b Saqib Mahmood 3(5)

LIVE CRICKET SCORE: England 288/4 in 50 overs; BATTING: Jack Burnham 106(104), Sam Curran 32(16): OUT! Holden departs after bringing up his half-century, with his mishit directing the ball towards mid-off, where Keefe holds on to the catch. OUT! Callum Taylor departs too, getting caught at short fine-leg while attempting a slog. OUT! Donald is next to depart, coming down the track and missing the delivery completely to  get himself stumped. Burnham, who was earlier dropped on 31, manages to bring up his hundred, while Sam Curran races to the 30s in no time, hammering 20 runs in a single over off Mashinge. England however, finish on a commanding total of 288 for four. OUT! Max Holden c Adam Keefe b William Mashinge 51(90), Callum Taylor c Wesley Madhevere b Rugare Magarira 6(6), Aneurin Donald st Ryan Murray b Wesley Madhevere 25(17)

LIVE CRICKET SCORE: England 139/1 in 30 overs; BATTING: Max Holden 43(77), Jack Burnham 29(36): Burnham has settled at the crease quite quickly, and has hit two fours and a six so far in the innings. Holden, meanwhile, is approaching his half-century at the moment. Meanwhile, England look set for a total in excess of 300 at the moment!

LIVE CRICKET SCORE: England 94/1 in 20 overs; BATTING: Max Holden 24(50), Jack Burnham 3(3): Fifty for Lawrence! Superb form displayed by the opening batsman so far! OUT! Lawrence’s innings comes to an end after scoring 59 runs. Comes down the track, and is not able to make enough room to execute the shot, getting caught by Magarira at long-off! OUT! Dan Lawrence c Wesley Madhevere b Rugare Magarira 59(67)

LIVE CRICKET SCORE: England 56/0 in 10 overs; BATTING: Dan Lawrence 43(43), Max Holden 6(17): The players walk out to bat, with England having won the toss, and in-form opener Dan Lawrence targetting another big score today. Lawrence smashes three consecutive fours off Mashinge in the fifth over to set off along the aggressive path. Lawrence has already moved to 43, with the help of six fours and a six, with Max Holden batting at 6 at the other end.

Toss: England U-19 win the toss, and elect to bat.

Brandon Mavuta is leading the Zimbabwean side and are coached by Stephen Mangongo. They have a good bunch of talented young cricketers especially the potent medium-fast bowler William Mashinge. They have started off their tournament on a promising note and are well capable to beat England if either of their department clicks. For England, who are placed with Fiji and Zimbabwe in the same group won the title way back in 1998 and will look forward to replicate their magic in this edition too. Andy Hurry is the coach of the side with Brad Taylor being the skipper. They have a well-oiled side with some talented names like Daniel Lawrence, Jack Burnham, Mason Crane, Sam Curran, Ryan Davies, Aneurin Donald, Saqib Mahmood and Callum Taylor. 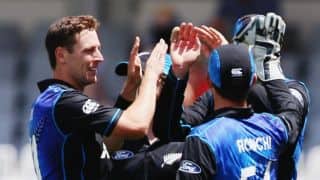