Bangladesh skipper Mashrafe Mortaza won the toss and elected to bowl first against India at Sophia Gardens, Cardiff in the the second Cricket World cup 2019 warm-up match for both the teams. India are playing with 14 players with Kedar Jadhav still recovering from the shoulder injury, while Vijay Shankar is fit and will be expected to bat at No.4 for India. Bangladesh’s first warm-up match was washed out – against Pakistan – while India suffered a heacy defeat at the hands of New Zealand in their first warm-up game.

The game will be live on Star Sports 1 and Star Sports 1 HD. Live streaming available on Hotstar. The Sophia Gardens in Cardiff is usually a high-scoring venue but can witness a bit of help for the pacers with the aid of the weather. Under overcast conditions, the Sri Lankan pacer got to swing till the end of the first powerplay against South Africa in the first warm-up game played at this venue.

India skipper, Virat Kohli says that they were looking to bowl first as well. He states that they did test themselves in the first game under difficult conditions but now if they are batting first, they will try to do their best having already got a hang of conditions. About the previous game, Kohli mentions that they played a practice game within 2 days of coming to England and it is not easy to do that. Virat states that they have played lot of cricket and are in good frame and that they have time to their first game so he is not too worried. About the team combination, the Indian skipper informs that Kedar Jadhav is still not available today but Vijay Shankar is fit and hence they will be playing 14 instead of the 13 who played last time around.

Bangladesh skipper, Mashrafe Mortaza because of the conditions and the fact that the wicket was under cover, hence they want to bowl. Informs that most of the players are playing today as it is their last chance before the World Cup. Ends by saying India is one of the biggest sides and it will be a good test for them against their Asian rivals.

TOSS – Indian skipper, Virat Kohli calls HEADS but the coin comes down as TAILS. Bangladesh win the toss and elect to bowl first.

Hello and welcome to the final day of warmup game. Favorites, India take on Bangladesh in their final preparation before the main event. The Men in Blue were completely demolished by the Kiwis in the last game. Their batsmen will look to put up a better show before heading into the tournament. Bangladesh, on the other hand, will finally look to have a complete game before they kick off their World Cup campaign. They did not even take to the field in the last game and might feel a little uncertain to the conditions before the start of the showpiece event. We have a very good game in prospect. 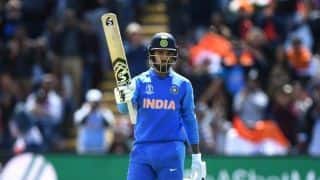