India set a 160-run target against Afghanistan in their ICC World T20 first match at the R Premadasa Stadium in Colombo on Wednesday. 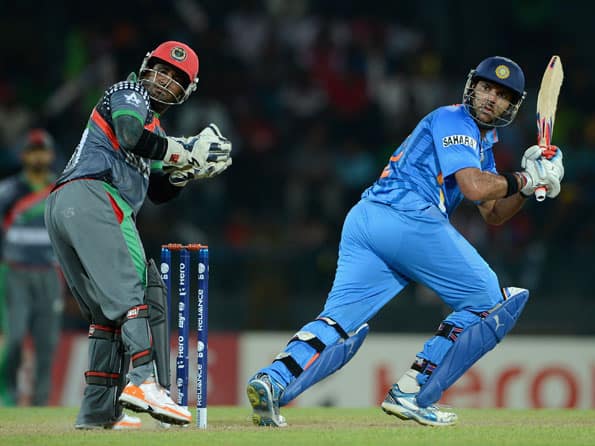 India set a 160-run target against Afghanistan in their ICC World T20 first match at the R Premadasa Stadium in Colombo on Wednesday.

India, who produced a good batting performance against Pakistan in their warm-up match, struggled to flourish against a disciplined bowling attack of Afghanistan.

Shapoor Zadran rocked India early when he got rid of both the openers.

Gautam Gambhir poor run with the bat continued as he fell to Shapoor in the third over, getting an inside edge of his bat and the ball crashing into the middle stump.

India was jolted once again by Shapoor in his third over, when Virender Sehwag was caught by wicketkeeper Mohammad Shahzad for eight.

Kohli and Yuvraj then joined forces to take India forward, adding 46 runs for the third wicket.

Yuvraj failed to get a big score after a strong start, as he was dismissed by Karim Shadiq for 18, caught by Shapoor.

Yuvraj struck one six during his innings.

After Yuvraj s dismissal, Kohli and Suresh Raina put up a 46 run-stand for the fourth wicket.

Kohli continued his good run as he completed a fluent half-century, but soon fell after that.