Catch all the live updates of Day 4 of the 2nd Test between India and Australia here.

India buckled down in the final session to reach 71 for one at stumps against Australia on Day Three of the second Test. Shikhar Dhawan and Cheteshwar Pujara remained India’s unbeaten batsmen as the in-form Murali Vijay was dismissed with the score on 41. Mitchell Starc took the wicket, though it was Mitchell Johnson who looked threatening early on. Read Highlights of Day 3

India started on a positive note, with Vijay and Dhawan showing some positive intent while facing a fired up Johnson. Vijay, who went past 1,000 Test runs against Australia during the course of his innings, looked particularly impressive during his 28-run knock, taking on Johnson and hitting as many as four boundaries. He was dismissed when Starc when the latter caused him to misjudge a delivery on off stump that seamed in just enough to take out the stumps as Vijay shouldered arms. READ DAY REPORT

Thereafter Dhawan and No. 3 Pujara buckled down to play some watchful cricket. Both men curbed their strokes and tried to play with a straight bat. They decided to take quick singles rather than go for big hits, and decided to play for a draw. Both men remained unbeaten at stumps. If India manage to get a sizable lead, it could prove to be quite difficult for Australia on the fifth day on this track. Read: India’s tail ought to take leaf out of Australian tail’s book

Australia were bowled out for 505 after their lower order continued to make merry against some abysmal bowling from India. Australia managed an imposing 97-run lead on Day Three of the second Test. Steven Smith and Mitchell Johnson massacred the Indian bowling with a thunderous 148-run partnership for the seventh wicket. READ REPORT: India’s inability to dismiss Australia’s tail can have huge impact

Steven Smith 21st Australian to win first Test as captain. The last one to do so was Ricky Ponting in 12 March 2004 (v SL at Galle) #AusvInd

Ind will be dissapointed with this defeat especially after being in such a strong position till lunch 3rd day.have 2 learn&improve #AUSvIND

Australia 130/6 I Overs 23.1
M Marsh 6 (7), M Jonshon 2 (3)
FOUR, Australia go 2-0 up and now they can’t lose the series from here. Marsh strikes the winning blow and embraces Johnson in a hug. The latter plucks out a stump as a souvenir. Both men are all smiles, tapping each other on their backs. Lyon is off the chair, roaring in delight in the dressing room. This was too full and outside off, Marsh lashes a drive past cover to seal it for the hosts.
Australia 126/6 I Overs 23
M Marsh 2 (6), M Jonshon 2 (3)
Yadav to Haddin, and OUT! Another wicket! Is there any twist left? The score is 122 for 6. The bouncer gets Haddin again. He goes for the hook and can’t control it, hits it uppishly, down Kohli’s throat coming in from deep backward square leg. Is there any surprise?
B Haddin c Kohli b Yadav 1 (2)

Good point in commentary by Harsha that develop Ashwin as a batsmem at 6 and we get play with 5 geniue bowler. #AUSvIND

Australia 122/5 I Overs 22
M Marsh 0 (4), B Haddin 1(1)
OUT! OUT! OUT!, Smith is gone now. Australia still need 6 more runs. It was a length ball, angling in towards middle stump and he shuffles across to tuck it away towards deep backward square leg. Smith goes for the second, and has to run around Aaron just after he turns, and that means he can’t beat the direct hit at the striker’s end. They go to the third umpire but he’s well out.
S Smith run out 28 (39)
Australia 116/4 I Overs 21
S Smith 23 (36) , B Haddin 1 (1)
OUTTTTTTTTT!, Yadav gets S Marsh and The ball was  down the leg side again and it’s given! Dhoni appealed as soon as it was in his gloves, and the finger went up immediately. Looked to nudge it off the hips and HotSpot shows a tiny mark as it passes the glove.
S Marsh c Dhoni b Yadav 17 (17)
Australia 90/3 I Overs 17
S Smith 16 (29), S Marsh 1 (1)
Out! Rogers gone just after his fifty. And a very well played fifty to. The ball was short and wide, and there’s a bit of extra bounce on it. The left-hander goes hard at the slash and the edge went very quickly towards Dhawan at third slip and he took it with both hands over his head.
C Rogers c Dhawan b I Sharma 55 (57)
Australia 85/2 I Overs 16
C Rogers 55 (55), S Smith 12 (26)
Fifty for Rogers. Very well played. Looking like its all over for India. MS Dhoni’s team is heading towards another away defeat. Meanwhile Virat Kohli dropped another catch at slips.

Today in 1894, 120 yrs ago at the SCG: Australia became the first team to lose a Test after enforcing a follow-on Lost by 10 runs! #Ashes

While on commentary on Darren Lehmann Gavaskar:Theres Bruce Willis look alike Hayden:He is more like that green character – Shrek! #AusvInd

Australia 10/0 I Overs 3
C Rogers 9 (13), D Warner 1 (5)
David Warner and Chris Rogers started carefully for Australia. Though its not easy out there for them. But the target is too little to compete. India have to show some fight.
India 224 I Overs 64.3
I Sharma 1 (9)
So its its all over. India 224 all out, Australia need 128 runs to win. Johnson finishes with four wickets. He’s been the gamechanger with bat and ball in this Test so far.
U Yadav c Haddin b Johnson 30 (42)
India 229/9 I Overs 62
U Yadav 30 (36), I Sharma 0 (0)
OUT! Poor game sense by Aaron. He should have stayed with Yadav. nother wicket for Lyon. Aaron comes down the track and goes for another big slog. This is the classic offspinner’s response to being slogged by a tail-ender. Tosses it up slower and wider and he top-edges that and it loops up for a simple catch at backward point. Now Umesh is trying to get some runs.
VR Aaron c Hazlewood b Lyon 3
India 205/8 I Overs 60
U Yadav 13 (28), V Aaron 2 (5)
OUT! Big wicket. SHIKHAR DHaWAN is gone. Lyon has done it. It was angling in towards middle and it straightened a little. Pitched off, hitting middle or thereabouts. Dhawan went for the lap sweep and missed, maybe not the right line to be sweeping, and it struck him on the front pad in front of middle. Loud appeal from Haddin and it’s given.
OUT! S Dhawan lbw b Lyon 81 (145)
India 198/7 I Overs 58
S Dhawan 80 (140), U Yadav 9 (25)
India now have a lead in three figures. Good partnership between Shikhar Dhawan and Umesh Yadav. Current partnership is on 56, Useful runs for for India.

India 157/7 I Overs 47
S Dhawan 41 (92), U Yadav 7 (8)
Lunch on day four! Anyone in shock at seeing Pujara and Dhawan at the crease but the scoreboard showing 6 wickets? Don’t be as Dhawan was struck in the nets on the wrist and didn’t come out to bat first up in the morning. Kohli, Rahane and Rohit were all easy meat for the man named Mitch. He was on fire and it soon became worse when Dhoni was given out lbw. Ashwin and Pujara built a little stand but the former was wrongly given out when it went straight off the thigh. 86 run were scored in this session and lost six wickets.
India 143/7 | Overs 45
S Dhawan 34 (84), U Yadav 0 (2)
OUT! Now Pujara’s turn to go. Similar dismissal to Rahane’s. Short outside off, fended off with no conviction at all, shoulder of the bat and straight to gully. Pujara’s resistance is over.
Pujara c Lyon b Hazlewood 43(93)
India 129/6 | Overs 42
S Dhawan 27 (76), C Pujara 41 (87)
India last recognised batting pair is fighting here. The lead is only 32. Lyon and Johnson bowling tightly. Smith can reiterate what he quoted yesterday in the press conference. “They didn’t have an answer for Johnson”.
India 117/6 | Overs 37
S Dhawan 26 (67), C Pujara 30 (66)
OUT! India six down. Ashwin is going back to pavilion now. That one came back in just a touch from outside off, back of a length. Ashwin was shuffling across, looking to defend. His bat came down at an angle and was pointing to wide mid-on rather than straight back down the pitch. Ball comes in, takes his inside edge, and Haddin takes a simple catch. I’m not sure it was the inside edge. May have been just his back thigh. No HotSpot mark on the inside edge. Snicko seemed to react when it passed his thigh. Shikhar Dhawan is at the wicket now. This pair is India’s last hope.
R Ashwin c Haddin b Starc 19 (29)
India 110/5 | Overs 35
C Pujara 28 (62), R Ashwin 14 (23)
Drinks at the ground now. First hour of Day Four is completely belongs to Australia. After one hour of play India only lead by 13 runs lost 5 wickets. Looking like a early finish of the Test match.
India 89/5 | Overs 31
C Pujara 15 (35), R Ashwin 2 (5)
MS Dhoni, India’s leading run scorer in Tests in 2014 is also out. Its all falling like a house of card. India still to take lead. Dhoni looked to do his shuffle across and out of the crease and Hazlewood bowled it right up, on an off-stump line. Dhoni desperately looked to play around his pad, and couldn’t connect. Finger went up immediately for the lbw appeal. It seemed to hit him in line, but would it have hit the stumps or gone over? He was quite a long way down the track. Hawkeye says it’s hitting top of middle.
MS Dhoni lbw b Hazlewood 0 (2)
India 86/4 | Overs 29
C Pujara 15 (35), MS Dhoni 0 (1)
Johnson is on fire! Two wickets in the over, That rose dramatically from back of a length and Rahane was in no position to do anything about it. His hands went up instinctively and the ball popped up for a simple catch to backward point. They’re checking for no-ball, and it’s a very very close call. Rohit’s one was quite clear. Same old thing for him, tentative outside off stump.
AM Rahane c Lyon b Johnson 10 (8), R Sharma c Haddin b Johnson 0 (2)
India 76/2 | Overs 26
C Pujara 15 (35), A Rahane 1 (0)
The day gets worse for India. Virat Kohli is played on. India still 21 runs behind. So India virtually three down. Kohli shuffled across and poked away from his body at a back-of-a-length ball angling away from him. It may have straightened off the pitch, and it took the inside edge of his angled bat and clattered into the stumps. They’re checking for a no-ball, but he’s okay. Back of his heel is behind the line. Ajinkya Rahane is the new man in.
V Kohli b M Johnson 1 (11)
India 71/1 | Overs 24
C Pujara 15 (35), V Kohli 0 (6)
Not a good start for India. Shikhar Dhawan is injured and could not come out to bat. So Virat Kohli is at the wicket with Cheteshwar Pujara. Shane Watson bowled a maiden over to start the proceedings of the fourth day. Dhawan was hit on the arm while batting on net.

Big blow for India with shikhar not resuming his innings. He was looking in good touch yesterday. Hope the injury is not serious. #AUSvIND

This is history, 1st time sitting and watching cricket with my Dad ever! The Sad thing is, there’s no beer in the fridge! #AusvsInd #WWOS

How do you rate the celebrations so far today? The @Toyota_Aus training seems to be working: http://t.co/BrLwRxx0tz pic.twitter.com/2JoT7xqLi5

India unimpressed with practice pitches at the Gabba after injuries to Dhawan and Kohli before play today: http://t.co/X08Tb9scTg #AUSvIND 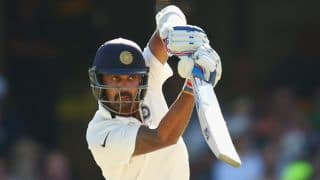