Australia reached 259 for five at the end of first day’s play in the third Test match played against India at Melbourne Cricket Ground (MCG) on Friday. Steven Smith was the highest scorer for Australia as he remained unbeaten on 72. Shane Watson and Chris Rogers also smacked individual half-centuries but failed to convert it into big scores. They both were also involved in 155-run partnership.Watson looked promising but was dismissed by Ravichandran Ashwin as he tried to sweep a full length delivery pitched on off stump.

India started well in the Test match as  David Warner was dismissed by Umesh Yadav only in the second over of the match. With Smith and Haddin on the crease Australia would like to get to move past 400. 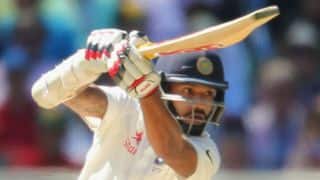