Catch the live updates of the fourth Test between India and Australia here.

(Can the Steven Smith-led Australia complete a 3-0 series victory, or can Virat Kohli lead India to a consolation victory in the final Test at Sydney? Catch live cricket scores here)

TOSS: Australia captain Steven Smith has won the toss and elected to bat against India

Steven Smith smashes his 10th half-century in Test cricket and Shane Watson remained unbeaten on 61, as Australia finished the first day of their fourth and final Test against India at a strong position of 348 for two. Smith scored off 134 balls, hitting 10 boundaries while Watson chipped in with a fine not out of 132 balls with the help of six fours. Smith and Watson added 144 runs for the third wicket to punish a hapless Indian bowling attack. They steadied Australia after they lost the wickets of David Warner and Chris Rogers in quick succession.

David Warner was dismissed by R Ashwin as India finally struck in the second session. Warner was caught in the second slip off Ashwin by Murali Vijay, but not before smashing 101 runs off 114 balls with the help of 16 boundaries. He added 200 runs for the first wicket with Chris Rogers, who was dismissed by Mohammed Shami for 95. The Australian opener played one on to his wickets off Shami as he missed out on a much-awaited century. Meanwhile, David Warner smashed his third in this ongoing series. Warner faced 108 balls and smashed 16 fours to score an emotional century, and one wonders whether there will be another as emotional as this one. Rogers faced 160 balls and struck 13 fours for his 95.

At lunch, David Warner remained unbeaten on 63 not out, the score which will be remembered for a very long time. He took off his helmet and kissed the ground amid huge applause, as Australia continue to make a mincemeat of a dispirited Indian bowling attack.  Australia started off on a positive note yet again as both David Warner and Chris Rogers scored freely against the Indian pace attack.   Bhuvneshwar Kumar has been quite erratic in his comeback match in international cricket, and so has been Umesh Yadav. The right-hand pacer Umesh was replaced by India after only two overs as he ended up giving 18 runs off them. Mohammed Shami started off well beating David Warner outside the off-stump. India did produce an opportunity — in the seventh over off Mohammed Shami when KL Rahul spilled an easy catch at the second slip to get rid of Chris Rogers. Australia crossed the 50-run mark after eight overs.

Earlier, Australia decided to bat first after winning the toss as India have made as many as four changes in their playing XI. The biggest development is that Shikhar Dhawan has been dropped and so has been a struggling Cheteshwar Pujara. Rohit Sharma and Suresh Raina get a chance. In the bowling department, India have rested Ishant Sharma and have drafted in Bhuvneshwar Kumar. Wriddhiman Saha comes in for Mahendra Singh Dhoni, who has retired from Test cricket. For Australia, Mitchell Starc comes in for Mitchell Johnson, who has been rested from the final Test keeping the triangular series and the ICC World Cup 2015 in mind.

Australia end the first day with 348 runs on board, and they will look no less than 500/550 as their first innings total. India looked dispirited and so did their fielders with two dropped catches. Here’s Nishad Pai Vaidya’s final report for the day.

Australia 348/2 | Overs 90
S Watson 61 (132), S Smith 82 (134)
Umesh Yadav was India’s most expensive bowler on Day 1, and in the last over, he did produce an opportunity. An outside edge off Shane Watson’s bat flew past R Ashwin at the first slip, which perhaps marked yet another poor day in the field for India. Australia completely dominant throughout the day.

It has been painful watching Bhuvaneshwar Kumar bowl. The question is : should he have been playing when he can barely touch 130.

Australia 326/2 | Overs 85
S Watson 52 (118), S Smith 70 (118)
India have taken the second new ball but it has brought no change in the way they are bowling. Wriddhiman Saha is standing close to the wickets to Bhuvneshwar Kumar. Smith and Watson’s partnership is of 122 runs.
Australia 317/2 | Overs 80
S Watson 50 (102), S Smith 63 (104)
He started off on a struggling note but Shane Watson has recovered well to smash his half-century in this Test. Watson has taken 102 balls and smashed five fours to achieve the feat. He and Smith have added 113 runs so far in this innings.
New ball is due now.
Australia 309/2 | Overs 77
S Watson 43 (88), S Smith 62 (100)
Australia have gone past the 300-run mark as both Smith and Watson are scoring runs at ease. Watson, in particular, has seemingly shrugged off the slow start and has picked up a couple of boundaries. They have also brought up their 100-run stand for the third wicket.
Australia 284/2 | Overs 69
S Watson 30 (74), S Smith 50 (68)
Yet another half-century for the Australian captain as he continues to make most of the tremendous form he is in. Smith came at the crease after Shane Watson, but he has rushed to his fifty which only tells us about the richness of the form he is in at the moment. This is Smith’s 10th half-century in 26 Tests.
Australia 256/2 | Overs 64
S Watson 14 (52), S Smith 38 (59)
For some reason Shane Watson is not looking at ease at the crease. He collects a couple of runs through the covers but Steven Smith has gone way ahead of him. This is important because both these batsmen had come to the crease almost at the same time.

Afraid the bowling has been ordinary. Nothing at all, no pace either, for Bhuvaneshwar. Shami and Yadav too inconsistent.

Australia 242/2 | Overs 60
S Watson 10 (37), S Smith 28 (49)
It’s time for tea at the Sydney Cricket Ground with Australia well in command. India did well to take two wickets in form of David Warner and Chris Rogers, but Steven Smith and Shane Watson have done well to take them to tea unscathed.
Australia 228/2 | Overs 55
S Watson 7 (31), S Smith 17 (26)
Steven Smith and Shane Watson have steadied Australia after the two blows early on. While Smith is looking comfortable in the middle, Watson is looking quite edgy.
Australia 204/2 | Overs 46
S Watson 0 (2), S Smith 0 (1)
Oh dear! Heartbreak for Chris Rogers as he has played one onto his wickets, thus missing out on a much-awaited century. Mohammed Shami gets the second wicket and India strike back in quick succession.
OUT! C Rogers b M Shami 95 (160)
Australia 200/1 | Overs 44.5
C Rogers 91 (155)
Finally!!! India have a wicket and Ravichandran Ashwin gets rewarded for the hard work he has done so far. The ball was pitched outside the off-stump, inviting the batsman forward. Warner moved ahead but was surprised with the bounce and turn, as the ball took outside edge and Murali Vijay took a fine catch. India take a huge relief!
OUT! D Warner c M Vijay b R Ashwin 101 (114)
Australia 189/0 | Overs 42
D Warner 100 (111), C Rogers 80 (141)
There it is! Century No. 3 in this four-Test series for David Warner, who has taken 108 balls and 16 boundaries to achieve the feat. The left-hander batsman hits Shami for a four on the leg side and jumps in the air to celebrate his 12th Test ton. What an innings!!!
Australia 181/0 | Overs 40
D Warner 95 (106), C Rogers 78 (134)
Australia are charging at the moment with David Warner and Chris Rogers calling the shots out there in the middle. No challenge whatsoever from the Indians as there are talks about the part-timers like Suresh Raina being inducted into the bowling attack now. India in serious trouble certainly!

This partnership is going to challenge every stitch of India’s character, @imVkohli having a tough initiation into leadership. #AUSvIND

Australia 126/0 | Overs 29
D Warner 63 (77), C Rogers 55 (98)
Play has begun after lunch and Mohammed Shami starts with a couple of lose deliveries on the pads and leg-stump. Australia add three more runs to their total.

Australia have been in complete command today. David Warner and Chris Rogers have provided them a solid start and they will look to build on this platform. Here’s Nishad Pai Vaidya’s lunch report.

Australia 123/0 | Overs 28
D Warner 63 (74), C Rogers 52 (95)
It has been Australia’s session with David Warner and Chris Rogers bringing up their halfcenturies. Indian bowling attack looked ordindary and they failed to grab the only chance that came their way. Australia are on top at the moment, and 2-3 quick wickets is the only way India can force their way back in.
Australia 120/0 | Overs 27
D Warner 63 (74), C Rogers 49 (89)
There is a huge round of applause for David Warner, who has reached 63 not out. The left-handed batsman took off his helmet and gloves and kissed the spot where Phillip Hughes fell after being stuck on the back of the head.
Australia 102/0 | Overs 20
D Warner 56 (53), C Rogers 40 (68)
While Ashwin is doing the damage-control for India, David Warner is getting back into form as he has brought up his third score in excess of 50 in this series. He smashed three consecutive fours off Umesh to get to the 50-run mark rapidly. This is Warner’s 14th Test half-century. Australia go past the 100-run mark as well in this over off R Ashwin.
Australia 72/0 | Overs 13
D Warner 34 (38), C Rogers 32 (40)
Australia are seemingly all over India at the moment as Rogers and Warner are batting with lot of ease at the moment. Umesh Yadav has been brought back into the attack, but apart from that spilled catch

Incredible that with just 33 tests behind him Virat Kohli is the most capped player in this team. #timesarechanging

Australia 50/0 | Overs 8
D Warner 21 (23), C Rogers 23 (28)
KL Rahul spilled an easy catch off Mohammed Shami at the second slip to get rid of Chris Rogers, as Australia reach their 50-run mark after just eight overs in the innings. It’s been their session so far, with India producing only one chance and that too spilling it.
Australia 39/0 | Overs 5
D Warner 15 (15), C Rogers 18 (17)
Indian bowlers have not created any chance so far as Australia have begun on an aggressive note. Both Rogers and Warner are looking determined here.

Australia 14/0 | Overs 2
D Warner 9 (8), C Rogers 4 (4)
David Warner and Chris Rogers have begun the proceedings for Australia, with Bhuvneshwar Kumar and Umesh Yadav sharing the new ball between them. Australian openers have begun positively as they have scored 14 runs off the first 12 balls in the match.

Hello and welcome to CricketCountry’s coverage of the fourth and final Test between India and Australia at the Sydney Cricket Ground on Tuesday. I am Devarchit Varma, and I will be bringing you the live updates from the match.

Virat Kohli begins his full-time captaincy as India take on Australia in the fourth Test at the Sydney Cricket Ground, starting Tuesday. It will also mark the beginning of a new era for India as MS Dhoni called time on his Test career and handed Kohli the reins.

Kohli captained India during the first Test at Adelaide Oval, where India put up a spirited chase on Day Five. This, however, is a bigger occasion. India may have lost the series, but they will have all to play for here with Kohli’s aggressive approach itching to prove a point before heading into the one-day leg of the tour.

With Dhoni retiring, the gloves have been passed down to Wriddhiman Saha. Saha has been Dhoni’s understudy for over four years and has waited for this chance to come his way. In the limited opportunities that came his way, he has shown the necessary skill behind the stumps. With the bat, he is gutsy and can add solidity to the batting. However, if Saha is not available, Dhoni may be called in as a backup. 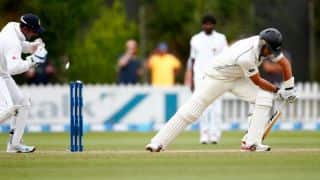 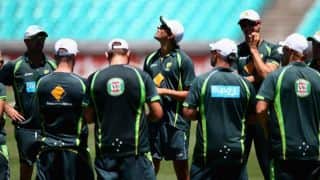