Debutant Shikhar Dhawan blew away Australia's hopes of making any comeback in the Test series with his record unbeaten century that broke many a record as India raced to 283 for no loss in the first innings in the third cricket Test after third day's play at Mohali on Saturday. 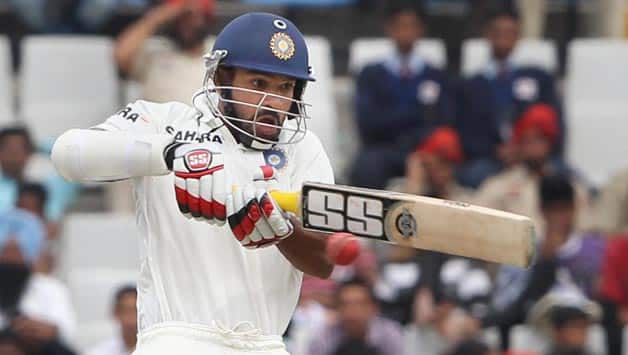 Shikhar Dhawan is unbeaten on 185 ©  PTI

Debutant Shikhar Dhawan blew away Australia’s hopes of making any comeback in the Test series with his record unbeaten century that broke many a record as India raced to 283 for no loss in the first innings in the third cricket Test after third day’s play at Mohali on Saturday.

Dhawan, who replaced his statemate Virender Sehwag, remained unbeaten on 185, which was not only the fastest by any cricketer and the highest by an Indian. India now trail Australia by 125 runs.

Dhawan hit 33 fours and two sixes in his 168-ball unbeaten knock. He is now just 15 short of becoming the first to score a double century on debut by an Indian.

As Dhawan went about smashing the Australia, Murali Vijay was quietly progressing towards his second consecutive Test hundred and was not out on 83. The 283-run unbeaten first wicket stand between Dhawan and Vijay was the highest by an Indian pair against Australia.

Australia were bowled out for 408 shortly before lunch after Mitchell Starc top scored with a fine 99 and Steven Smith struck 92.

Dhawan made the most of generosity shown by the Australian team since he was techincally run out even before the first ball was bowled.

As Starc ran down for the first delivery, the ball slipped from his grip and the hit the stumps and Dhawan was short of crease. The Australians, however, preferred to have a laugh instead of appealing.

Vijay and Dhawan safely saw off the only over as the hosts took lunch at 3/0 in their first innings. After the break, Dhawan was unstoppable.

Dhawan, 27, set the tone with two crisply timed fours off Peter Siddle in the fourth over. Dhawan got to his maiden half-century with a four off Nathan Lyon through the mid-on in the 18th over. Vijay got into the act by smashing the off-spinner for two sixes in the last three balls as 17 runs came off the over.

Dhawan was severe on Moises Henriques, Lyon and left-arm spinner Xavier Dhoerty, who leaked 18 runs in 23rd over. Dhawan completed his century in just 85 balls with almost a suicidal single and got a standing ovation from the crowd.

Earlier, resuming at 273 for seven, the morning session was perhaps the best for Australia as they scored 135 runs losing the last three wickets.

Overnight batsmen, Smith and Starc added 97 runs for the eight wicket and also achieved their best scores in Test cricket.

Smith, who made a comeback in Test side after a little more than two years, impressed with the responsibilities he shouldered with the tailenders. It was an aggressive innings by Smith and he hit 10 fours and a six in his 185-ball knock before falling eight short of what would have been his maiden Test ton.

Meanwhile, Starc rose above his potential of being tailender and batted with purpose. The fast bowler smacked 14 fours during his 144-ball stay.

Starc and Lyon (9 not out) added valuable 41 runs for the ninth wicket that took Australia to the threshold of 400-run mark.

Having added 79 to his personal score in the morning session, Starc needed just one run to reach the milestone. But he slashed hard at Ishant Sharma (3-77) and it flew to Dhoni, who snapped up a good catch that also left Australia stranded at 399/9.

Xavier Doherty (5) became Ravichandran Ashwin’s (2-97) second victim after he was trapped in front.