Catch the live updates of the fifth One-Dayer between India and Australia here.

(Can India finally register a win in the ongoing series? Or will Australia head to the final unbeaten? Catch the Live cricket scores of the 2nd ODI between India and Australia here)

The umpires have decided that enough is enough, as the rain emerges winner in this clash. The match has been called off as there were no signs of play starting soon due to relentless rain. India would be very disappointed as they needed a win desperately to stay alive in this tournament. They take on England on Friday and it definitely remains a must-win game, that too with a big margin for India.

2.20 PM IST: Umpires are inspecting the field as the rain seems to have subsided a bit. However, there is no surety if at all we will have the match resuming anytime soon. The cut-off time for the game to start, even if it is a 20 overs per side affair, is 8.45 PM local time (around 3.30 PM IST).

12.25 PM IST: It’s pouring hard at the venue, no chance of play yet. Remember, the previous rain interval had caused a loss of six overs per side.

Bad news from the Sydney Cricket Ground (SCG), as the rains have interrupted the play for the third time in the day. India have reached 69 for two after 16 overs in the match which is already truncated to 44 overs per side.

David Warner took a fine catch running behind as Ambati Rayudu, who was looking to score quick runs, was out after a run-a-ball 23. Rayudu was looking very positive but his wicket would have certainly increased India’s woes. Virat Kohli walks in.

India were steady as they went past the 50-run mark in the 11th over as Ambati Rayudu and Ajinkya Rahane looking to score quick runs. Rayudu in particular looked extremely positive as he not only went for the big shots but is also rotated the strike well.

Mitchell Starc once again jolted India early as he has removed Shikhar Dhawan, surprising the batsman on a short ball. India have their worries as Dhawan continues to fail. Play has resumed after the long rain interval — the second in the day — as India have begun positively. After the rain interval the rules were revised — a bowler will be allowed maximum nine overs as the first powerplay will be of nine overs and the second would be of four overs.

After only 16 deliveries in the match the rain interrupted at the Sydney Cricket Ground (SCG). This will certainly be a concern for India as they do not have a win yet in the tournament and the remaining two matches will be ‘do or die’ ones for them. Players and the umpires have walked off the field. There was an appeal for leg-before against Ajinkya Rahane, but the ball was missing the stumps. Shikhar Dhawan, who is under tremendous pressure to get runs, was looking a little edgy.

India 69/2 | Overs 16
A Rahane 28 (50), V Kohli 3 (9)
Australia have pulled back things in control with the wicket of Ambati Rayudu. India are not in a hurry to score runs as preserving the wickets are key here. Only three runs added off Doherty.
India 66/2 | Overs 15
A Rahane 27 (49), V Kohli 1 (4)
James Faulkner is into the attack as India add only two runs off his first over.
India 64/2 | Overs 14
A Rahane 24 (43), V Kohli 1 (4)
Virat Kohli has joined Ajinkya Rahane in the middle as India once again look to pick up after losing Ambati Rayudu.
India 62/2 | Overs 12.5
A Rahane 24 (40)
What a catch! Ambati Rayudu mistimes a stroke off a short ball by Mitchell Marsh, and David Warner takes a brilliant running catch running behind as India stumble once again.
OUT! A Rayudu c Warner b Marsh 23 (24)
India 56/1 | Overs 12
A Rahane 23 (38), A Rayudu 19 (21)
Fine start this by Xavier Doherty as he keeps Rahane and Rayudu tied up. India add five more to their total.
India 51/1 | Overs 11
A Rahane 21 (36), A Rayudu 17 (17)
India go past the 50-run mark in the 11th over of the innings as they have lost one wicket in form of Shikhar Dhawan. Ambati Rayudu is looking very positive, using the crease well and walking across to play the ball close to his body.
India 45/1 | Overs 10
A Rahane 19 (34), A Rayudu 14 (13)
Impressive stuff by Josh Hazlewood as he allows India only four runs in that over. India have been scoring easily over five an over ever since the play resumed post the rain interruption.
India 41/1 | Overs 9
A Rahane 16 (29), A Rayudu 13 (12)
What a shot! Ambati Rayudu makes a little bit of room and whacks a six down the ground off Mitchell Marsh’s first over in the game. India add another nine runs to their total.
India 32/1 | Overs 8
A Rahane 14 (26), A Rayudu 6 (9)
Ambati Rayudu struggles against Josh Hazlewood, but also hit the pacer for a boundary. The batsman picks it up from the off stump and smashed it toward mid-on. Single to end the over, as India collect another six runs now.
India 26/1 | Overs 7
A Rahane 13 (25), A Rayudu 1 (4)
Absolute shambles for Shikhar Dhawan as he has yet another failure. Starc drops it a little short right outside the off-stump. Dhawan fails to keep the ball down as he comes forward to defend and gets an edge. Ambati Rayudu walks in as India look to pick up after yet another early wicket.
OUT! S Dhawan c Watson b Starc 8 (12)
India 24/0 | Overs 6
A Rahane 13 (24), S Dhawan 8 (12)
Ajinkya Rahane gets his second boundary, down the leg side as he tries to pull one very short off Hazlewood and the ball brushes the gloves. India add six more runs to their total.
India 18/0 | Overs 5
A Rahane 8 (19), S Dhawan 7 (11)
Starc was little wayward in that over as he gifted Shikhar Dhawan couple of loose balls to score off. India looking to score quick runs as of now.
India 12/0 | Overs 4
A Rahane 8 (19), S Dhawan 1 (5)
Ajinkya Rahane gets the first four of the innings with a classic leg glance off Josh Hazlewood in the fourth over. India add six runs to their total.
India 6/0 | Overs 3
A Rahane 2 (13), S Dhawan 1 (3)
Mitchell Starc begins after the rain interruption to finish off his second over in the game.

10.30 AM IST: Cricket Australia (CA) informed on Twitter that the 5th ODI between India and Australia could be reduced to 44 overs per side.

The report from the middle was that the play will resume in about 15 minutes, but the recent development is that the covers are back on.

India 6/0 | Overs 2.4
A Rahane 2 (13), S Dhawan 1 (3)
A bit of concern for India as the rain is coming down hard at the Sydney Cricket Ground (SCG). The Indian openers have been cautious so far, as this is a must-win game for them.
India 4/0 | Overs 2
A Rahane 1 (10), S Dhawan 0 (2)
Josh Hazlewood begins the proceedings from the other end and starts off with three consecutive wides down the leg side. There was an appeal for leg-before against Ajinkya Rahane later in the over, but the ball was going way above the wickets.
India 1/0 | Overs 1
A Rahane 1 (4), S Dhawan 0 (2)
Fine start this by Mitchell Starc as he keeps a probing line and length throughout the over. Shikhar Dhawan was beaten on the first ball, and it will be crucial for him to spend time on the wicket.

All set to begin as the Indian openers — Shikhar Dhawan and Ajinkya Rahane walk out to bat.

Australia have won the toss, and have asked India to bat first in the fifth One-Day International (ODI) at SCG. The toss was delayed after a bit of rain in the morning, but it has cleared up now. The ground staff worked hard to bring the ground up to scratch. The toss was delayed, but we should get some action soon.

Hello and welcome to CricketCountry’s coverage of the fifth ODI between India and Australia at the Sydney Cricket Ground (SCG) on Monday. I am Devarchit Varma, and I will be bringing you the updates from the match. READ: India vs Australia, 5th ODI Preview

India are yet to win an encounter in the ongoing tri-series, losing both their games to Australia and England by four and nine wickets respectively. The main source of concern for the Indians has been their batting. With the notable exception of Rohit Sharma (138) and Suresh Raina (51) in the first game against Australia, none of the Indian batsmen have been able to put up decent scores on the board. The failure of Virat Kohli and Ajinkya Rahane to provide the fans an encore of their Test feats has hurt them too. READ: Watson vs Faulkner: Who is the better all-rounder?

Australia, on the other hand, have been the dominant side in the tri-series so far, remaining unbeaten in the three games that they have played so far. While their bowling has been consistent on most occasions, it is their batting, especially the top-order, which has helped them win matches. The likes of David Warner and Steven Smith have successfully successfully managed to replicate their Test form, and setup the foundation for the three wins in the tournament so far. They have also been benefitted by the services of the middle-order, which has helped see the side through.

It’s a lot brighter now & teams are out for their warm-ups. Players and support staff are having a close look at the SCG wicket. #AusvsInd — Shirin Sadikot (@ShirinSadikot) January 26, 2015

We’re LIVE from the wet @SCG for the #AustraliaDay ODI on @Channel9! #AUSvIND #WWOS pic.twitter.com/i8TydGkZnX

The SCG looks rather gloomy with stop-start drizzle and a very thick cloud cover. #AusvsInd pic.twitter.com/cDrG52oNTB 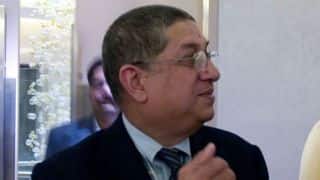 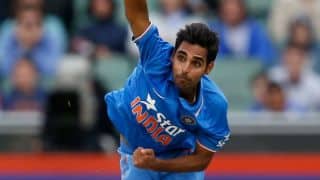